posted on Jan, 19 2013 @ 05:28 AM
link
Seems like U.S is getting more domestic problems, the mass shootings and attempt at gun control. It looks like something is building up. Maybe an attempt at obama this inauguration? Incoming crazy gun slinger.

If this did happen? What would happen the next day? Government wont trust the people with any guns, since you just killed your leader.

Gun ban didn't happen when our other presidents were shot. There's been plenty of that


Every President that goes into power will be a target at some point, this will never ever change. Some make it and some dont.

posted on Jan, 19 2013 @ 06:37 AM
link
I imagine one could do a search and find similar topics during his first innaugeration.

Speculation is our bread and butter here, but the safest place in America is probably around Obama.

posted on Jan, 19 2013 @ 06:39 AM
link
Lets hope nothing happens because even though obama isn`t the best milking cow that we have in the barn,that crazy joe biden scares me, we don`t want him as president.


That's my exact thought. They're crazy tyrants, not insane. lol


I am confident that all precautions have been made in an effort to secure the safety of the President of the United States of America as well as all other principles attending the Inauguration events. However, if such and unlikely and God foreboding tragedy did occur, I can guarantee that a President Joseph Biden would not hesitate to hold ALL responsible parties accountable and would do so in the most fiercest and harshest manner possible so anyone even entertaining the idea better think long and hard about the consequences.

posted on Jan, 20 2013 @ 11:27 AM
link
I am a firm believer we are warned through movies and even video games what is coming in some instances.
See this:

During the Inauguration Day in Washington, D.C. on January 21, 2013, a low-yield tactical nuclear weapon is detonated in an apparent groundburst, presumably having been concealed there in advance. The yield is sufficient to destroy most of the city, killing Adams, his cabinet, and most of the U.S. Congress, effectively wiping out the presidential line of succession.

Also see this from here:

We hide the Truth right out in the wide open 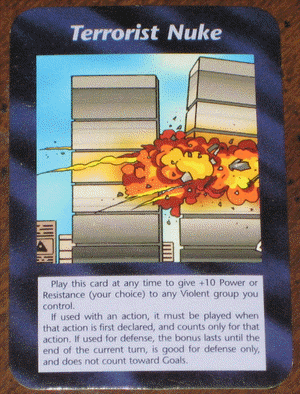 
If there is any foul play at the inauguration, I have no doubt that it would be an orchestrated event by TPTB to further their own agenda. Bama wouldnt be harmed, there would only be a "scare" to influence public opinion.

If some occurs, look for the "crazy" "lone" gunman mind controlled patsy to be paraded around the media for a year as the face of evil, and look for him to be directly associated with guns at all times, demonizing them, to help further the agenda of disarming the public so they can be steamrolled into a totalitarian police state without resistance.

It would be a false flag event that I am certain they have considered executing. With the levels of security reaching levels or abject paranoia at these events, NO ONE could get in who was not ALLOWED in for the purposes of furthering an agenda.
edit on 1/20/2013 by CaticusMaximus because: (no reason given)

Originally posted by beezzer
the safest place in America is probably around Obama.


Totally agree. The rest of us are out here having to deal with the thugs and criminals and unarmed schools etc etc but he's wrapped up nice and safe in his armored cocoon.

There are strong confirmations that one or more nuclear weapons, known to have been stolen but kept from the public to “prevent panic,” may well be deployed in American cities by extremist elements with probable ties to a foreign intelligence agency.


The plot has been tracked to groups within the Pentagon, several government agencies and wealthy and powerful extremist backers of Netanyahu and, in particular, the “Gulf Cartel” operating from Mexico that has penetrated nearly all levels of government, law enforcement and the military across the country.

posted on Jan, 20 2013 @ 04:48 PM
link
even if some loony did whack obama it wouldn't do much to gun rights and hey if obama is half as bad ass as teddy Roosevelt it might even be a chance for him to score points if he gets shot and then finishes his speech like teddy Roosevelt did www.history.com...