I know the source is "before its news" but being from Wyoming I will say that we are all talking about this here.

Before I begin I would like to tell you a little bit about Wyoming. First and foremost our gun laws are easily the most lax of any state including Texas. We are allowed to conceal and carry a firearm without a permit as long as you are a resident of Wyoming. If you are not a resident you can still open carry. Walking down the street about every other person you see most likely has a firearm on their person at any given time.

We are a state of proud gun owners with an average of 6 guns per person. It is also worth noting that we also have the lowest violent crime rate per capita of any state in the US. We also have a castle doctrine law that allows the use of deadly force to protect your home and property.

(neat little fact) We also have a law in place allowing farmers to hang you on their property if you are caught attempting to steal livestock.

We sort of consider ourselves as the last bastion for freedom in the US. 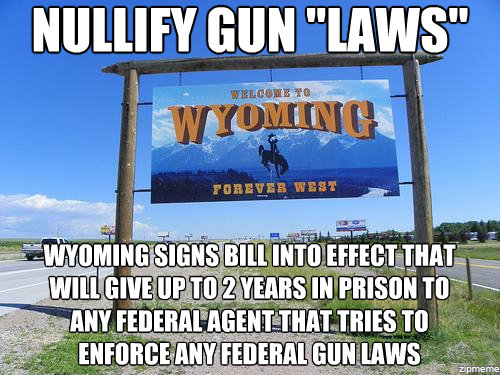 As the Obama administration plots various assaults on gun rights by "executive order" and legislation, proposals described as "very extreme" even by some Democrats, state lawmakers in Wyoming have another idea. Republican legislators are rallying behind nullification legislation that would void unconstitutional infringements on the right to keep and bear arms, even providing prison time for any federal agents who may try to enforce Washington, D.C., gun control in the state. Lawmakers expect it to pass. The new bill, H.B. 0104 or the "Firearms Protection Act," would nullify any new federal infringements on the constitutionally protected gun rights of state residents – who enjoy some of the lowest crime rates while being among the most heavily armed people in America. Unconstitutional federal gun registration schemes, as well as restrictions on semi-automatic guns or standard-capacity magazines, would also be nullified under the legislation.

"We take the Second Amendment seriously in Wyoming.... If the federal government is going to pass laws taking back our rights, it is our right as a state to defend those rights."

So ATF be warned.. you try and take my guns and you will be escorted away in handcuffs and enjoy a stay in one of our fine prisons.

posted on Jan, 17 2013 @ 01:18 PM
link
Thats certainly different.. It will be interesting to see how they deal with that law if the order does get passed. I don't think even Wyoming will stand in their way for some reason.

posted on Jan, 17 2013 @ 01:25 PM
link
Ahh.. I loved Wyoming as a trucker. Many hated the state because I-80 seems to go forever and take weeks to travel the number of hours it actually is between Nebraska and Utah. Heck.. I loved driving through there though. Wonderful people, great scenery and a sense of Freedom unusual even by Western state standards. Heck the state police didn't even write tickets up there unless people got legitimately stupid and dangerous about their driving or speeding. I.E...the point where even I sometimes wished I'd been a cop instead of a driver so I could have the ticket book for awhile. lol...

GOOD for Wyoming though. Of course, you know with things like this, Wyoming may not have a population problem by lack of enough for much longer. You may find cities like Casper, Cheyenne and Sheridan packed to the rafters with new immigrants fleeing other states for some of the open sky country you have there. (Not to be confused with the Big Sky to your north ...for all those Montana people out there )

posted on Jan, 17 2013 @ 01:38 PM
link
I really wish our Florida state lawmakers would "sack up" and do this. We have a lot of good laws here, but we need to stop the regime and their power grab.


Yeah this state is really unlike any other. I hope that more states follow our example..

To be honest I'm still waiting for the Anti-gun crowd to pipe in at some point but.... I don't know how they can argue with this..

I think Wyoming is like a few other states to the Anti-Gun crowd. You're so far gone and "hopeless", you're just on the list of "problem cases" to deal with and erased from the column of 'those to work with' entirely. It's a distinction I'd take with pride in the current times, of course.

I love imagining the city based federal agents chasing Wyoming natives over the plains and across the mountains you all know as your own backyards. Oh.. it'd be entertaining to see and the outcome would never be in question for my bet. States always win in the end.


I've been caving in North East Wyoming. Fun times. Most of Wyoming seems pretty flat and brown though. Lots of trucks...possibly you! LOL

Well, as someone else pointed out ... we'll see how the Feds treat being arrested.


Lol North East Wyoming is the only flat part... haha..

Where I am it's straight up mountain country.

In re to your other point: We'll have to ask them when they get out of jail..


Probably because we are sick of talking about it, personally the lunacy of it all has completely done my head in.

I hope the gun nuts and the govt come to blows about this and wipe each other out. Problem solved and the rest of us can finally have a peaceful life.

I won't be responding any further by the way, that was my 2 cents and I'm leaving it at that.


Lol.... that was probably the most ignorant thing I've ever heard come from anyone in a long time.. and this is ATS for Christ sake..

You obviously do not understand the practical uses of guns that you directly benefit from..
edit on 17-1-2013 by DaMod because: (no reason given)

posted on Jan, 17 2013 @ 02:29 PM
link
My only hope is that montana follows close behind them.
I hate the thought of moving, but if push comes to shove
i'd rather live in a free state than a govt controlled state.


You mustn't get out much then


Next time you eat a burger.. I want you to look at it... and I want you to think of all the coyotes, wolves, bears and cougar that died so that you may enjoy that succulent morsel of beef..

Or all the fox that died so that your chicken would be Kentucky fried...

I want you to think about all the crows, magpies and rabbits that gave up their lives so your vegetables aren't half eaten and full of holes

And I've already responded twice more than I intended to, you bloody lot have a way of dragging people into conversations they don't want to have that is quite distasteful. Cheerio.
edit on 17/1/2013 by Kryties because: (no reason given)


My family owns a cattle ranch... Believe me when I say... your meat may die there but it wasn't raised there...

The best state in the union (in my humble opinion) I never thought it could get better, what with fossil hunting and gold panning.


Well, MT will probably follow suit. I noticed your from Missoula, those would be the only people to object. Missoula is what I like to call, "The most un-Montana place in Montana".

Did they ever fix malfunction junction over by Orange St?

Posts about how people should stand up for their rights....

Has nothing to say when a State does just that...


Perhaps the gun nuts 'holier than thou' stance has finally pissed off enough of ATS that they are steering clear of the debate?

I'm sorry man but I cannot take you seriously....