After election day most of us heard that Prop 37, the initiative to label GMO foods failed to gather enough support to get a majority vote at the ballot box, and after that it more or less disappeared from the news altogether.

However, this announcement was made prematurely and all of the votes were never actually counted. Now, as the Dec 14 deadline for the turn in of the votes approaches, more evidence of voter fraud is coming to light.

According to Food Democracy Now: “Right now the votes for Prop 37 to label genetically engineered foods are still being counted. On Tuesday morning, Dec 4th, Prop 37 hit 6,004,628 votes on the California Secretary of State’s website, but this tally was quickly reversed within an hour of being publicized by Food Democracy Now! 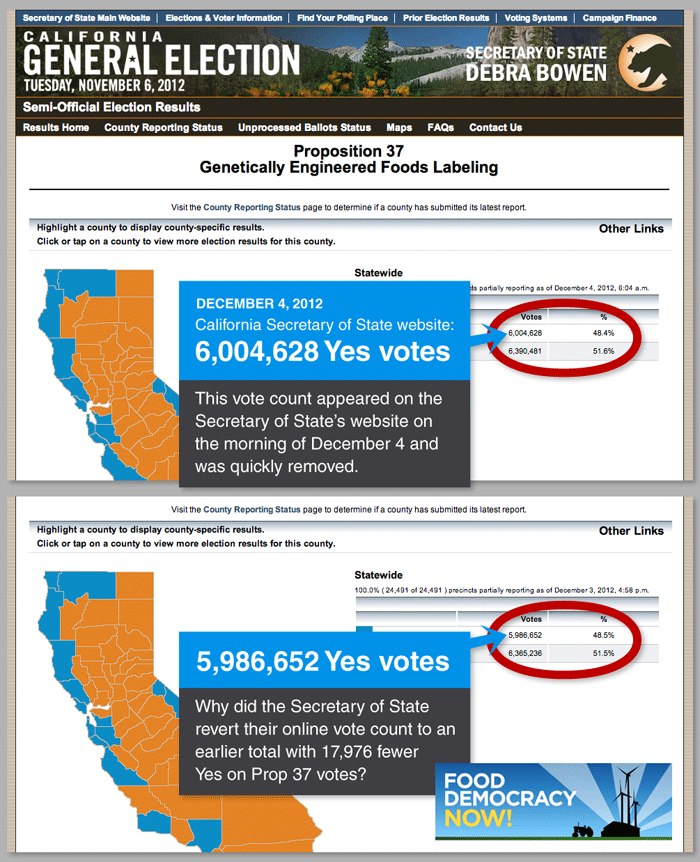 There can be fraud every time.

I think you're making a leap in calling it fraud. First, they are described as "semi-official" results, and second, it could just as easily have been a mistake. I don't think there's proof of fraud shown here.


At the same time, Food Democracy Now! has learned that a team of independent statisticians have detected “statistical anomalies” in the largest precincts of 9 counties, including Orange, Los Angeles, San Francisco, Alameda and San Diego counties.”

Could you explain the statistical anomalies then..? It says that approx. over 6 millions people voted on this issue, and roughly about half of those votes were against the labelling... Now, why would people not want their food labelled whether GM or not...? Dont make sense.....

Excellent questions. You've asked two and I can't answer either one. (I feel so inadequate )

How do I explain statistical anomalies? No idea. I don't know what they were, the number of votes involved, nothing. I was responding to the OP's claim of fraud based on the change in the online report, the screens that showed that of the 12 million votes cast, the "no" voters were ahead by a few hundred thousand.

How do I explain anyone voting "no?" Again, I don't know. I can't figure out the voters in this country. Heck, they re-elected Obama, what could they have been thinking? I don't even know what arguments were used by the opponents. I thought I heard about a slight increase in cost because of labelling?

My own argument, had anybody asked, would have been that labelling something GMO would lead to the use of the same type of scare tactics used to demonize Alar and apples. The Alar fuss was a fraud from the beginning, but environmentalists said informing the public justified the lying.

Originally posted by BlindBastards
Who would vote ‘no’ anyway? That’s just illogical. Only good can come from voting yes.

1) People are generally stupid - remember that an average IQ of 100 means that roughly half the population have IQs below that.

2) Advertising agencies, like the ones enlisted by Monsanto & Friends, know this, and became/remain vastly wealthy because of their success in exploiting that fact.
edit on 10-12-2012 by Son of Will because: (no reason given)


I do not know why this has even gone to a vote. A law should just be past so the GMO ingredients are labelled in our food products..