December 21, 2012. Report: While it has not yet been officially confirmed, our sources indicate that at 8:50 central time, a North Korean missile carrying a nuclear warhead has hit outside of Osaka, in the Kansai region of Japan. North Korea had previously warned its neighbors that they would carry out a missile test this month, a launch highly contested by South Korea, Japan and the United States. Damages are unconfirmed. Casualties are unconfirmed. We will keep you updated as new information comes in.

Oh no! This is it! Those jerks are gonna start World War III !!!

I started flipping through the channels. This breaking news was all over TV but nothing confirmed yet. How could Japan not confirm this??

CNN newscasters look nervous. This is not good. The internet...Twitter is down from overload, so is CNN.com and BBC.com. This does not look good at all.

Is little Kim really that stupid?

Wolf Blitzer has just entered the Situation Room with an update.

“Aren’t you going in the shower? You’re gonna be late for work.”

My eyes were riveted on the screen. So was my focus. What did she just say? Hmmm.

North Korea has denied the incident. Really? The POTUS is to be addressing the nation later on. This is worse than I thought! France, the U.K and China are already condemning this attack. China...really? That’s a surprise. Sources say that Japan is preparing for a nuclear retaliation...oh no. Please, no.

Confirmed. Other cities are being hit in Japan at this very moment. Russia? It could be from Russia?? Wait...what?? North Korea is being hit. Unconfirmed but probably from South Korea. I think I’m gonna be sick. Two hours have passed. Two hours !!!! Moscow has been hit? By whom? When?? Blitzer is freaking out.

I ran to the toilet and was sick. Sue kept knocking on the door, thinking I was having a heart attack or something. I kept washing my face with cold water, trying to make this sweat go away. I told sue that I was just not feeling well but no heart attack. When I made my way out of the washroom, I went back on my laptop to see if some websites were back up and running.

Now, the internet is down. Overload or kill switch? Back on TV, reports are coming in from everywhere. South Korea, France and China have been hit. Hey! What just happened? Why is there a CNN logo and nothing else? My heart started skipping beats when, a few seconds later, the station went full of snow.

“What happened to the TV station?” Sue asked while walking towards me with a cup of coffee in each hand.

For the very first time in a very long time, I stood up, put both my hands on her shoulders, looked at her straight in the eyes and smiled.

And then there was this big bright flash.

Right up my alley, you just described the beginnings of Fallout 3 perfectly with a cool short story


Thank you Spike ! Glad you liked it !

The real scary part of this story is imagining Wolf Blitzer freaking out !!!

And then there was this big bright flash.


And substitute a voice on the TV saying, "Ladies and gentleman this has been a play put on by a long lost relative of Orson Welles. We now return you to regular programming."

Sorry, I know I don't have an editors license, that was rude of me. But as your doctor, I would advise you to leave this place immediately.


Indeed, the mental image that such a scenario brings to mind ( Wolf running back and forth frantically trying to figure out if his world is ending...) is disturbing....to say the least 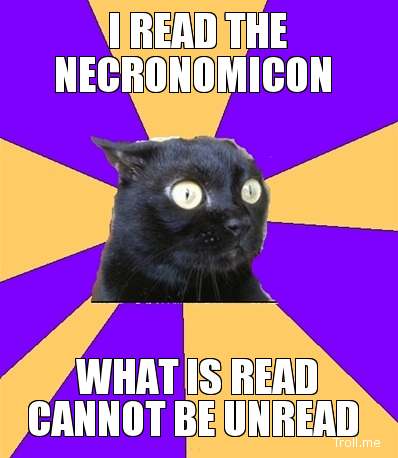 
It sounds kinda sick doesn't it?

My friend, could you possibly imagine the things that go through Stephen King's mind...

Now THAT is scary ! Thank for the alternate ending. I like it and wish I could have thought of it !!

Once again, I am touched !

Side note, I often wondered if Satellite phones would work, in a situation like this.


Good question, I think they wouldn't work due to the " EMP " blast which occurs when a Nuclear device goes off.

All of the satellites in the vicinity of the " EMP " blast would also be rendered useless, perhaps even falling from low earth orbit and crashing to earth to cause even more chaos...
EMP


Indeed, though on a side note; I was listening to ATS LIVE the other day, the " survival " show and one of guests said that a certain type of tin foil that one can purchase may be used to protect small electronic devices ( we have tinfoil hats around, right?)

And I also heard that your microwave might also protect small electronics that you could fit inside, which might protect the objects within from an " EMP "...

All this assuming one would even have time to react, and reach the microwave...


It sounds kinda sick doesn't it?

My friend, could you possibly imagine the things that go through Stephen King's mind...

Now THAT is scary ! Thank for the alternate ending. I like it and wish I could have thought of it !!

Not at all. Only "sick" to those people who are "too, too and very, very."

I feed on abnormality... keeps me sane.

But I likened it to, On the Beach, Miracle Mile, and of course, War of the Worlds. Thanks for letting me read it.

posted on Dec, 10 2012 @ 12:36 AM
link
Very well written. Disturbing, too. The sad truth is that I think a lot of people on this website are hoping for something exactly like this to happen in a few weeks.

Good read at any rate!


Very sorry about that !

But I can't promise that I won't do it again...

Originally posted by mysteriousmysteries
The sad truth is that I think a lot of people on this website are hoping for something exactly like this to happen in a few weeks.

Or a supervolcano blows us to bits or an alien invasion or a zombie apocalypse or a comet hits us or a major solar flare fries us or or or or or....

Glad you liked the story. Thank you !


well done, so very believable and in the current state of world political affairs just could be a case of art imitating life, but, if something like that did happen, i think in minutes a massive amount of user generated content/information from the immediate area of damage would be available.
I don't think their would be any problems finding information, in all truth it would be verified by the drums of the global village before the MSM released anything resembling actual fact from the area affected.