ANNOUNCING PUBLICATION OF THE MONOGRAPH:
AVISTAMIENTOS OVNI EN LA ANTÁRTIDA EN 1965
(UFO Sightings in Antarctica in 1965)
(FOTOCAT Report #3)
Dear friends:
We are pleased to announce the release of FOTOCAT Report #3. Titled (in Spanish) AVISTAMIENTOS OVNI EN LA ANTÁRTIDA EN 1965 (UFO Sightings in Antarctica in 1965), it is a research paper that examines in great depth the alleged UFO sightings that occurred between June and August 1965 in Antarctica. This collective essay is signed by Vicente-Juan Ballester Olmos, Manuel Borraz Aymerich, Heriberto Janosch González, and Juan Carlos Victorio Uranga and it is the result of six years of methodical and patient research, which has had the collaboration of many scholars, experts and consultants from several countries, as well as from some of the eyewitnesses themselves.
Several of these events have appeared profusely and repeatedly in the UFO literature because of the observers’ status-most were military-because of the remote environment where they happened, because of the alleged existence of recorded magnetic interference, because pictures were taken, and because of the extraordinary media coverage they enjoyed at the time.
In this monograph, the authors believe they have carried out the most comprehensive and detailed possible study–as per the existing sources-of 10 UFO sightings in the area, leading to some surprising conclusions. Its 183 pages include 74 figures (photographs, illustrations and graphs), 5 tables, and 4 appendices, in addition to 179 references and notes, as well as 40 pages with a gallery of portraits, documents and facsimiles of great documentary and historical value.
We have requested the opinions of three experienced researchers from Europe, USA and Latin America, and we are happy to share their commentaries here:
I was impressed by the obviously thorough attention to detail and the presentation. It looks to me like a superb piece of work. I hope it is as well received as it no doubt deserves to be. (Martin Shough)

With publication of this report, we finally see the truth behind a decades-old series of events that have puzzled and intrigued those who are fascinated with peculiar aerial phenomena. UFO reports are not always what they initially seem to be, as revealed by this inspired group of researchers, and the result of their inquiry is a much clearer and correct view of history. It is an excellent report. (Barry Greenwood)

This monograph shows a patient and thorough work and it convincingly proves four things: 1) The immense value of experts associating internationally for case analysis; 2) That scientific and military personnel are not exempt from having a romantic or fantastic view of the subject, so distorting their own assessments; 3) That the internal contradictions, serious inaccuracies and discrepancies of the stories take away their validity as evidence of strange phenomena; 4) The unfortunate role played by the mass media, which unscrupulously misrepresent the facts. (Milton Hourcade)

We trust that the present study will interest you and will serve to put into a true perspective this interesting series of UFO sightings.
The paper can be downloaded online from the following link:
/avistamientos-ovni-antartida
This essay has been written in Spanish; however, English-speaking readers will find the following sections in English language:
1) Page 2, the paper’s abstract
2) Page 129, Table V, it summarizes the main data for each of the 10 analyzed UFO observations
3) Pages 116 to 121, the paper’s Conclusions

The sightings are included in the seven official UFO declarations of the Argentine Government so will certainly be giving the report a read when time allows.

While Argentinean agencies played a role in a number of UFO incidents, and some of them having exceptional characteristics, such as the D'Annunzio case in Coronel Dorrego (1971); the Orán Case in Salta (1978) or the Bosque Alegre case in Mar del Plata (1985), only seven official communiqués exist to date in which the incursions of unknown objects is tacitly recognized. These are:


1962: At 19:20 hrs on May 22, a squadron of fighters in the vicinity of Bahía Blanca's Comandante Espora Naval Base, reports the presence of UFOs along its flight path. The interception lasted 35 minutes. Direct eyewitnesses to this incident were Lt. Rodolfo César Galdós and his student, Roberto Wilkinson. Report No. 02779 causes the first official acknowledgment by an Argentinean government.


1965: Between the months of June and July, a succession of UFO incidents occur in the Antarctic region, some of them producing electromagnetic disturbances, and witnessed by personnel from the British, Chilean and Argentine bases. A phenomenon on July 3rd at the Deception Island Naval Station generates the second official acknowledgment.


1973: On November 2nd, six members of the Comandante Espora Naval Air Base, close to Bahía Blanca, witness the maneuvers of a UFO, immediately producing the third official acknowledgment.


1978: On the evening of February 4 at the La Florida dam in San Luis, six persons report the presence of a UFO and the descent of an occupant from within, leaving ground marks. The Police Precinct of San Luis, through its chief, Lt.Col. Raul Benjamín López, issues a document which constitutes the fourth official acknowledgment.


1978: Toward midnight on July 12, a low-level UFO sighting causes a commotion in the Estación Ramblón region, located between the limits of San Juan and Mendoza. It was witnessed by police officers among many others. The San Juan chief of police, Col. Guillermo Voguel, prepares the fifth official acknowledgment.


1982: In the evening of August 13, a UFO causes a disturbance in the town of Londres, Catamarca, and its flyover produces strong winds and starts a conflagration. A police patrolman attests to the intruder's presence. The provincial police emits the sixth official acknowledgment.


1986: The appearance of a nocturnal UFO and the subsequent discovery of a gigantic indentation on El Pajarillo hill, Córdoba, on January 9th, prompt this city's municipal authorities to issue the seventh and final official acknowledgment.

(4) The unfortunate role played by the mass media, which unscrupulously misrepresent the facts.

Don't know about the mass media but there's a declassified CIA document below about the political situation in Argentina which also mentions the sightings. 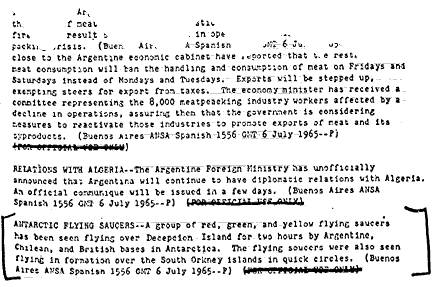 
Despite the highly questionable way the Condon Committee conducted itself, here's what the report had to say about the Antarctica sightings - it talks about pratical jokes, nancreous clouds and misinterpreted radio reports -it also states that 'no UFO observations on Deception Island were made by scientific personnel'.

posted on Dec, 9 2012 @ 06:52 PM
link
There will always be "prosaic explanations" put forward for every currently unexplained UFO case out there, they will just keep coming until the case has been ripped to shreds. I'm pretty confident though, that some cases cannot and will not, ever be explained sufficiently.

posted on Dec, 9 2012 @ 07:26 PM
link
Clearly the few antagonists of the "Are Non Human UFOs Real?" are quite correct in their, often quoted, "Official" government reports that there is always a "Prosaic Explanation" for aerial anomalies observed by even expert observers.
This is quite CLEARLY demonstrated by the other excellent current thread about the 1965 Edwards Air Force Base incident, where the "Official" government report and explanation, was that the observations were of a weather balloon and temperature inversion, and thats it.
Considering this Official Document and report was filed by a Non expert in the field, who just happens to be a member of the Foreign Technology department, who is, in effect, an Intelligence Officer.
Luckily evidence as exposed by a research team, and corroborated by EXPERT witnesses there, tell a different story..........a story contradicting...the "Official" line.

Sadly this smokescreen probably started during WW2 and has been perpetuated ever since.
The Government (s) have dug themselves such a BIG hole, that to get out of it with the truth, would expose too many people to interrogation by the media and public, that it is better to just shut up, and keep the smokescreen machine flowing.
Quite possibly these people are in breach of National Security protocols, and bordering on treason, in this day and age, if the truth was finally found to have been distorted for 70 years.

What may have been determined as "For The Good Of the Nation" all those years ago, could be seen very differently in the light of today....of course that goes for ALL Govt secrets.
I dont think the widespread public was aware of "Project Paperclip" ( Nazi Scientists given free life in the US), at the time of for 30 years later.............imagine what they would have thought of their "Leaders"...what in heavens name did they fight for???
Imagine all the other secrets hidden by the smokescreen........