Are crop circles the product of Direct Energy Weapons being calibrated?

posted on Dec, 7 2012 @ 11:42 PM
link
I was recently watching a Jesse Ventura show on Direct Energy Weapons and something clicked and added to a theory I've been working on in my head. Conspiracy Theory Season 3 Episode 2

If these Direct Energy weapons exist, and are quite possibly placed in space even before the Ronald Reagan's Star Wars era, could this energy weapons not be what is responsible for crop circles of today?

It's what makes most sense to me and who is to say the military industrial complex didn't already put these satellite weapons up before Reagan announced the possibility to the people years later? The technology was around since Tesla so it is feasible.

I think these crop circles we see are the results of direct energy weapons being calibrated. It's their way to configure and test it in plain sight. These crop circles have been popping up more and more intricate as the years go by possibly suggesting that this direct energy satellite is getting more precise as the hardware and software advances. Could this also not explain why some crops circle seem to be bent over using some kind of microwave? Could what we are seeing be a microwave of direct energy being used like a giant printer engraving chosen pictures and designs across some English country side?

All these questions pecked and chewed at my brain so what did I do next? I asked the great oracle Google... and looky what I found.

The next most technologically advanced class of Direct Energy Weapons is High Powered Microwaves. Although less well known than lasers, they hold an equal potential for usefulness on the battlefield of the future. While lasers offer a straight forward history, High Powered Microwaves (HPM) developed less evenly. In fact the normal microwave technologies used in ovens and for communications played minor roles in the development of HPMs. The technologies used to create HPMs derived from research into nuclear weapons effects. Since the late 70’s the technology has accelerated.

I know crop circles have been reported since the 1600s but I don't think it's the same thing. I think wind spiraling can explain those. Wasn't it the 70's when crop circles started getting more of a design to them other than just a circular motion? The same time era the article said the High Powered Microwave technology accelerated.

Okay ATS, what are your thoughts?

posted on Dec, 7 2012 @ 11:50 PM
link
I'm not totally sure, but I am of the mind that crop circles are the result of a couple cases of beer, a plank of wood, rope, and a baseball cap fitted with a loop of wire. (see Bower and Chorley)

I'm familiar with the case but c'mon, you really think boards, ropes and a couple drunks are gonna come up with something like this? 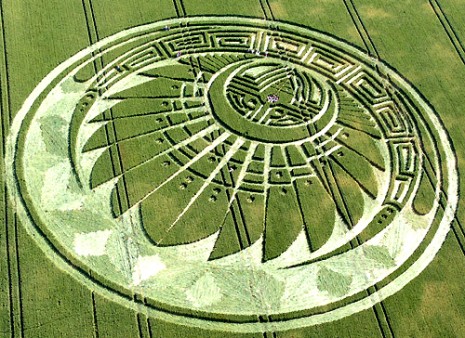 Sure some of them are people imitating them but the theory better explains what going on rather than me just saying E.T.'s are doing them.


drunks with ropes & boards
yeah...not so much

I'm familiar with the case but c'mon, you really think boards, ropes and a couple drunks are gonna come up with something like this?

Sure some of them are people imitating them but the theory better explains what going on rather than me just saying E.T.'s are doing them.

Give me a board and some rope when I'm drunk...and I'll end up hurting myself!

I could never duplicate this...sober or not!

A board and some rope?

I think I would find a tree and make a swing!


I have one problem with that. Most of the genuine crop circles exhibit clear demonstrations of the Flower of Life and Fruit of Life. Why would they be doing that?


Maybe the programmer that calibrates the energy weapon is in to these things.
What design would you expect if it was the calibration of a weapon? Making it mysterious so as to throw off other governments would be priority. These symbols, clock, and calendar designs immediately takes your assumptions in a different direction than it being a weapon. Exactly what I imagine they would want.

posted on Dec, 8 2012 @ 12:31 PM
link
Many crop circles are either close to one another or not to far away in England. They usually appear with certain months of the year. This could be where this satellite happens to be in orbit this time or the year and time of day.
I would imagine in the summer months this satellite weapon sits above Wiltshire, England in the A.M. hours. That's just me assuming that there is just one of these weapons. There could be many.


You care to share some links that show these rednecks doing a crop circle that has made the news or has been photographed by Lucy Pringle?

So, rednecks did this? Looks printed across the landscape to me.


I was being sarcastic for the most part, however, as for the origins of these things, no idea.I find them interesting, though extremely open to the possibility of hoaxes.


Why do they have to be drunk?


You don't have to be drunk to make one but I was jokingly referring to the two Englishmen Doug Bower and Dave Chorley who claim they came up with the concept of crop circle making over beers at their local pub back in the 70's.
edit on 6-1-2014 by TheLieWeLive because: (no reason given)