Just saw the proposed tax increases on the Middle Class, are they INSANE?!

These are INCREASES, NOT the total taxes. Have they lost their minds? They expect people to pay these amounts IN ADDITION to whats already being extorted from us???

These were the Bush tax "cuts" that the propaganda media was hyping?

As this thread proves: www.abovetopsecret.com... income taxes, the IRS is/are meant to control and intimidate the masses, NOT the rich.

I'm not sure what it will take to cause a revolt in this country but I hope this is it.

Here's the screenshot of what the OP is talking about: 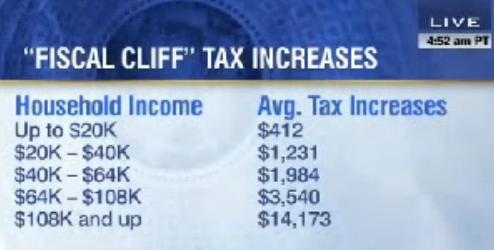 
Looks like the OP figured out how to add that screenshot to his post. Good job! Hope my tips help you in the future.
edit on 7-12-2012 by Heliophant because: (no reason given)


Somehow, I don't think $14K/year is a good value for healthcare. Throw in free Baskin Robins and a WoW subscription, plus an XboX... then it might be worth it
edit on 7-12-2012 by Heliophant because: (no reason given)


Of course, the $14K tax hike is on people in the higher tax brackets... but still. This Keynesian problem we find ourselves in isnt going to get any better by throwing more money at it. The system kinda HAS to be overhauled, starting at the FED.
edit on 7-12-2012 by Heliophant because: (no reason given)


Somehow, I don't think $14K/year is a good value for healthcare. Throw in free Baskin Robins and a WoW subscription, plus an XboX... then it might be worth it
edit on 7-12-2012 by Heliophant because: (no reason given)


Of course, the $14K tax hike is on people in the higher tax brackets... but still. This Keynesian problem we find ourselves in isnt going to get any better by throwing more money at it. The system kinda HAS to be overhauled, starting at the FED.
edit on 7-12-2012 by Heliophant because: (no reason given)

Oh, yeah BTW, If this news gets you fired up, just wait until Obamacare fully kicks in- then the fun begins!

And Obama's rating has gone up SMH

edit on Sat Dec 8 2012 by DontTreadOnMe because: Mod Note: Do Not Evade the Automatic Censors


Yeah, it's crazy!! They could tax the entire US workforce at 100% and that would still not eliminate the 14 trillion dollar deficit. They must cut spending. They want to bring tax levels back to the Clinton era to replicate that success but it is impossible unless they bring spending back to those levels as well.

posted on Dec, 7 2012 @ 06:03 PM
link
I don't get why people are so pissed off and surprised. These cuts were always suppose to be temporary.
You know what temporary means right? Or is this just another excuse to flame obama.

Indeed, 100% of our income would not solve the debt. In fact, 100% of ALL U.S. Currency from all around the globe will not solve the debt. The Keynesian curve has run its course, and there's really only one thing we can do to fix it - get rid of it and go back to a currency based on intrinsic value.

This isn't a "flame Obama" party. I think you just outted yourself as an Obama supporter.
What we're upset about is the unsolvable debt crisis, and how no amount of money will fix it. Red/Blue has nothing to do with it - a fiat currency can only inflate so much, then the system collapses. Macro Economics 202.

Back to the gold standard. Makes one think this has been planned.

No flaming Obama, there was no candidate that could (or wanted to for that matter) solve this problem.
If Romney would have won we would currently be flaming his lies.

To be fair, Ron Paul did want to address this by phasing out the FED. But still, this has nothing to do with Obama/Romney, Red/Blue, etc. Both parties have been complicit or at the very least ignorant of this. Everyone is afraid of the big bad FED.

Honestly, there isn't anything a statesman can do besides push to get rid of the FED. That's pretty much the only long-term solution here. Quit playing with Monopoly money and start using a currency that has real intrinsic value. It's simply amazing that we've been using a value-less currency for this long an no one saw a problem with it. The Founding Farther's warned us about this...
edit on 7-12-2012 by Heliophant because: (no reason given)


I wish I made $108,000 to pay an extra 14k on. This is the reason you have tax deductions to lower that amount. Stop complaining and be thankful for what you got.

Most of the country make under 52k per household, so I wouldn't say making over 100k is middle class.

No one ever said the top tax bracket represented the middle class. And besides, this kind of across-the-board increase is going to stifle new business, increase prices, and prevent anyone from saving very much. The problem is the fiat currency. Taxes and inflation will keep going up and the economy will continue to fail unless we resolve this with the FED. It's just the way fiat currency and Fractional Reserve Banking work.

When is tax free day in the USA?

And by that I mean in Canada we basically work until about mid to late June just to pay taxes. After that what we make would be ours to keep. Of course, this is not the way it is done but it is a different way to think about it.

No one ever said the top tax bracket represented the middle class.

It is in the title of the thread...

You never should have gotten a tax cut to begin with. If Regan had any common sense he'd have left the stuff where it was or made a MANDATORY removal of tax cuts. George should have done the same thing.

Now that people are comfortable not paying for anything the government has done, you all jump in the air when the time has come to do so.

America, you let your country slip into a financial disaster. It's time to fix it. That means ALL of you are going to be poor for a bit. Unless of course you simply ask the rich to reduce their wealth by about 20%, which to them is a drop in the ocean.