posted on Dec, 5 2012 @ 06:36 PM
link
So apparently this robot just made the world records for distance traveled by an autonomous vehicle. The wave glider traveled 9,000 nautical miles and was attacked by a shark and still survived! 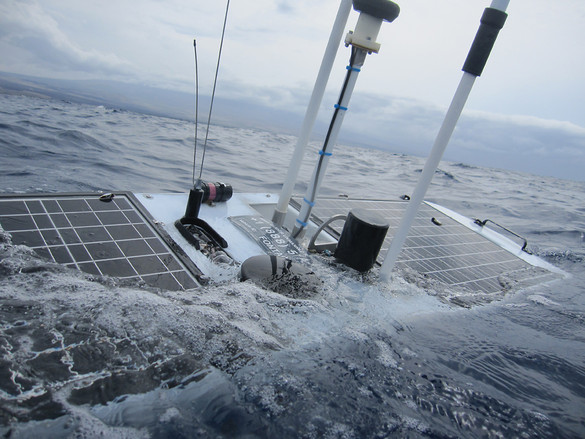 On his first journey across the Pacific Ocean, Papa Mau was bitten by a shark, whipped by 100 mph winds, and tossed by 30 foot waves. Somehow he survived the whole 9,000 nautical mile trip from Northern California to Australia. Papa Mau now holds the world record for distance traveled by an autonomous vehicle on land or in the sea.

The surfboard-sized robot is one of Liquid Robotics’ Wave Gliders--the first marine robots that propel themselves forward with wave energy. In November 2011, four Wave Gliders took off on a slow journey (they have a top speed of one and a half knots) across the Pacific, armed with sensors that measure oil spills, salinity levels, phytoplankton activity, and more. The goal: to spark interest in marine science, foster new innovations, and prove out Liquid Robotics’ technology. All data from the journey is available for free to anyone who registers on the Liquid Robotics website.


Papa Mau is the first Wave Glider to finish his journey; the other three robots are still in transit. All four Wave Gliders were taken from San Francisco to the Monterey Bay, where they spent three weeks syncing their data with existing sensors in the area (from organizations like NOAA). From there, the robots’ paths diverged.

I wish it would go into more detail about the shark attack, but I thought this was interesting!


That was a cool read. Thanks for the post. It still is amazing to me that we have sent more people into space than have been at the deepest reaches of the ocean. What a cool simple idea to collect data from the great blue.


Yeah, my mind went to deep sea mapping and on-board lab like the rover so we can have autonomous robots studying the oceans for Scientists to study their findings. We would be able to discover new bacteria, species, and god knows what almost on a daily basis if we had a ton of these out there.

Also we would eventually be able to get species data to determine environmental impact on sea life.

Great to see robotic tech as sea. I would love to know about the propulsion system but could not find anything. Will have another look later.