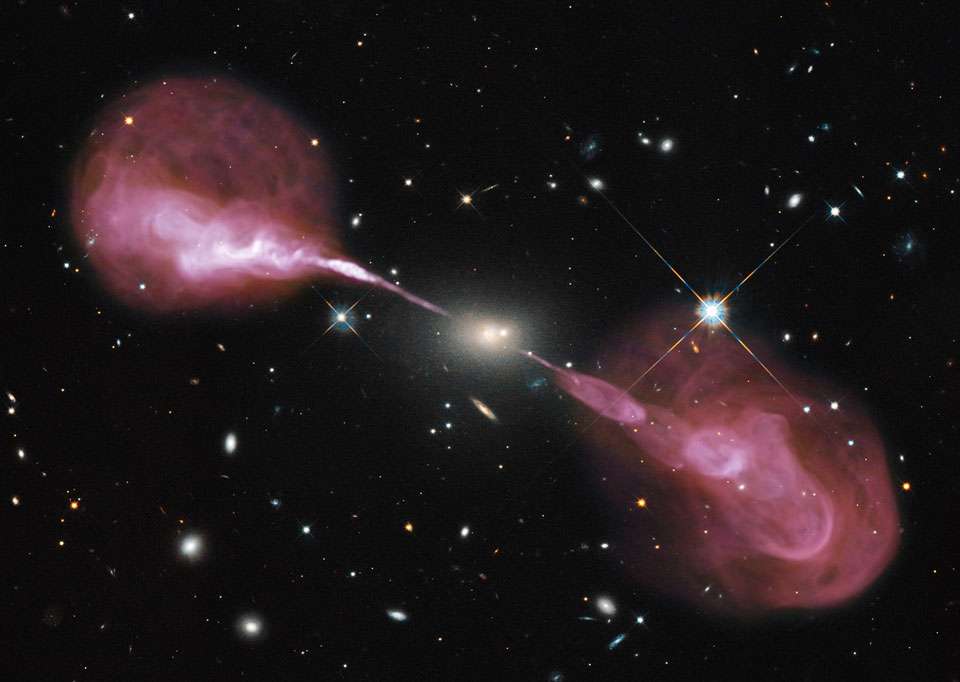 This beautiful picture is a composition of a Hubble image taken in visible light superposed with a radio image taken by the VLA (Very Large Array) of radio telescopes in New Mexico.

Why does this galaxy emit such spectacular jets? No one is sure, but it is likely related to an active supermassive black hole at its center. The galaxy at the image center, Hercules A, appears to be a relatively normal elliptical galaxy in visible light. When imaged in radio waves, however, tremendous plasma jets over one million light years long appear. Detailed analyses indicate that the central galaxy, also known as 3C 348, is actually over 1,000 times more massive than our Milky Way Galaxy, and the central black hole is nearly 1,000 times more massive than the black hole at our Milky Way's center.

The physics that creates the jets remains a topic of research with a likely energy source being infalling matter swirling toward the central black hole.

That, in itself, is beyond spectacular!
Makes me wonder what effects the plasma has on it's surrondings.


Plus, all those fuzz balls in the photo are galaxies also! Lots of galaxies out there. Its mind blowing. How can all this be in existance and "we" get to see it (not folks in the past, before the technology to do so, just us) why?


Just so I understand...

If I was there with my eyes, I would only see a normal galaxy -- right?
I would need "radio-vision" ( ) if I wanted to see those jets.

I wonder if there are alien creatures who can "see" in the radio spectrum.


Just so I understand...

If I was there with my eyes, I would only see a normal galaxy -- right?
I would need "radio-vision" ( ) if I wanted to see those jets.

I wonder if there are alien creatures who can "see" in the radio spectrum.

About the capacities of alien creatures, well, I really don't know, but my guess, based on what we know about various species on Earth, would be that it could really be possible.

Let's take a look for example at the bats and their extraordinary "acoustic vision" (not the right words, I guess...).
Maybe some sorts of alien creature have developed special organs that give them abilities to detect radio spectrum the same way we see visible spectrum with our own eyes.