May I Address Something

YOU CANNOT SAY FOR SURE AS TO WHETHER OR NOT SOMETHING WILL OR WILL NOT HAPPEN WITHIN THE COMING DAYS, WEEKS, OR WHATEVER.

'You' is synonymous to anyone who claims they know infallibly that without a shadow of doubt that something is or is not going to happen. Why? You simply do not know as to whether or not the predicted events will happen or not. I know I'm being repetitive but I do it in regards with intention of instilling within in whomever it is that it's practically impossible.

Do I personally believe the world's actually going to end and all human life will cease to exist? No. In all honesty though, I do not know. To what I understand, Nibiru doesn't physically exist, I say physically because esoteric knowledge states that Nibiru exists on a different dimensional level. Do I necessarily believe in that? Not really. Should I, alike all the other innumerable predicted possibilities to occur within this month, give it some attention? Sure. I'm mentally stable enough to read predictions about possible situations because I'm personally positive that nobody on this planet definitely knows the timeline. Do I personally believe in the other esoteric agenda like dimensional shift, enlightenment, or ascension? Not really, but I leave it as a possibility. Do I understand thoroughly that the Mayan Long Count calendar did not prophesy the end of all life? Yes.

Please, do not try and tell me that I haven't read or researched enough, or that you, yourself, have done so to know that in fact something is or something is not going to happen because to my knowledge, there is no public empirical evidence that something will or will not happen. Aside from NASA proving the non-existence of Nibiru physically, in terms of apocalyptic evidence, or correlation to the date in other ancient civilizations or writings like the i-Ching and obviously, Calendars. Be honest with yourself and everyone else, you do not know.

My main point I'm trying to make here is, if you're not mentally capable enough to read possibilities for this month that people have conceived, then don't. Fear-mongering? More like gullibility, paranoia, and overall lack of knowledge. Those, who really cared, would take the time and put effort into finding their own personal affirmation as to whether or not they believe something will or will not happen. In the end though, one could assume they still realize, that ultimately they do not know. Perhaps something will or will not happen. All we can really do is wait and see what occurrences appear or lack thereof. We're already aware that most of the perpetuated events that were to happen within this time span in reference to doomsayers and the "2012" movie haven't happened; earthquakes of unprecedented magnitude and natural disasters of epic proportions.

I'm not even going to offer an award to someone who can present to me "evidence" that something will or will not occur because there's really not any. Sorry, but that's the truth. "Happenings" occur all the time, ambiguous as it is, I mean it in the sense of events happening globally. Not so often do apocalyptic events come into the common order of nature, but when they do, rather than being the end of all life, it can be the end of many others' (9/11).

In conclusion, nobody really knows as to whether or not something will or will not happen. Let's wait and see, shall we? If you feel the urge to "prepare" for whatever it is, then by all means do so. If you're happy not doing anything at all and waiting to see how things turn out, then continue doing so. However, please do not "fear monger" and be a doomsayer or someone who spreads false hope for a positive outcome. When has time ever been proven as finite?

posted on Dec, 3 2012 @ 06:06 PM
link
To be fair OP, there have been so many doomsday claims in the past that have come and gone that I do not blame anyone for not believing that there will be some catastrophic, cataclysmic event on that date. All other predictions have failed prior to this one. I cannot fault some for thinking something will happen either; it's their prerogative to have their own beliefs on this, for whatever reasons they may have in doing so.


lol the naysayers are posting 10+ threads A DAY
WTF is with that?
or is reverse psychology being applied to create FEAR ["all this denial, somethings up"]
also starting to see threads that seem to be casting blame and demonizing people who think/believe something will happen
as if to start a witch-hunt against them when or if something does happen

as for the cults like heavans gate these are MK-ULTRA ops
free range experiments
when they get out of control like koresh and friends and dont follow the self destruct command
they're all wiped out including the children
HG members were all pretty deep pockets. where did the money signed over all go?
[to reply to the reply you sent me last night on one of these demonization threads]

i'm with jibbyjedi in that there is a major disturbance forcewise as some folks here seem to do 180's personality-wise
have they joined the Darkside?

lol
i mean seriously, it's as if they're trying to convince themselves.
and failing!

though i do intend to ritually immanentize the eschaton on that day
my point all along is pretty much the op's "they've got no way of knowing!!!"
the irony is they risk winding up like these folks
'The Eve of the Deluge' by William Bell Scott 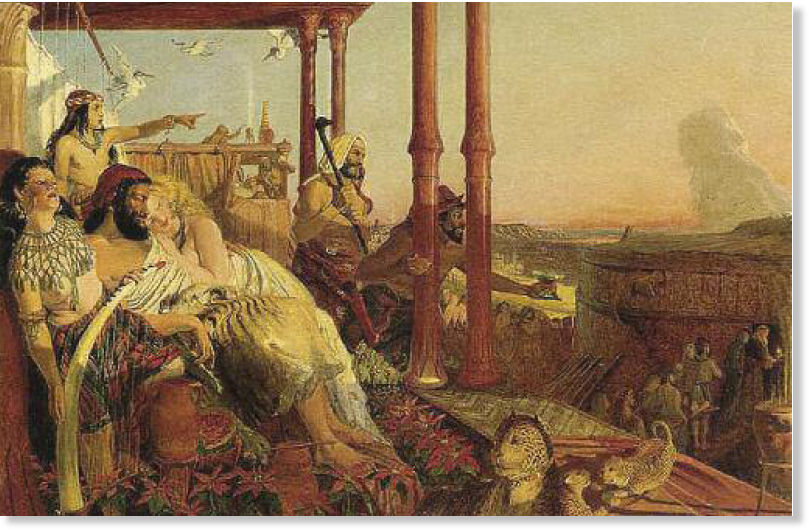 [note that many plan to be drunk, lol!]

i'd like to point out that the demonization also lays the groundwork for justifying going after any preppers
post catastrophe, by those who didn't lay up supplies!
uh huh