posted on Dec, 3 2012 @ 05:46 PM
link
This has nothing to do with the Mayan calendar, December 21st, or anything other than I'd like to hear what your favorite doomsday/apocalyptic movies are?

I am huge fan of this genre, and would like to source ATS members for their favorites so I can spend the holidays (oh joy!) catching up on these types of films.

So, my thread I'll go first.

"Miracle Mile" directed by Steve De Jarnatt is by far, hands down my favorite end-of-the-world film. It's slow paced with doom impeding while weaving a love story together that won't last, mixed with elements that have the characters wondering what is real and what is fake. It's acted well, it's got a budget for amazing scenes, and it holds the viewer on the edge of their seat while also questions what's the truth. 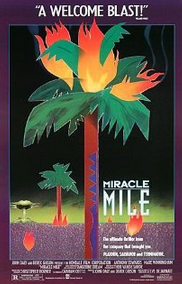 Harry tries to call Julie on a pay phone, but only reaches her answering machine, where he leaves an apology. When the phone rings moments later he picks it up, hearing a frantic man telling his dad that nuclear war is about to break out in less than seventy minutes. When Harry finally gets a chance to talk and asks who's calling, the caller realizes he has dialed the wrong area code. Harry then hears him being arrested and presumably shot.

So community - what are your favorite doomsday films? If you would please source the movie or use IMDB.com to link so we can check it out. Thanks.

Have always liked the remake of night of the living dead, and also really enjoyed the remake of dawn of the dead. (Love zombie movies) Also the road is mean but depressing as hell. There are lots of goodies from alien invasion movies to mad max type movies but I have come across some hilarious ones also... including this gem


American planes are sent to deliver a nuclear attack on Moscow, but it's a mistake due to an electrical malfunction. Can all-out war be averted?

Yeah Mad Max was good, only really liked the first one.


I liked The Road too. Lol

Son says-"Dad, we might find some seeds in that haystack" (to eat)
Viggo (dad) says in quiet battle worn voice " I doubt it"

Dr. Strangelove or How I Learned to Stop Worrying and Love the Bomb

An insane general starts a process to nuclear holocaust that a war room of politicians and generals frantically try to stop.

The Road - read the book and saw the movie, love it.

Mad Max - Saw all the films, but its been years it may be time to revisit.

Dawn/Day of the Dead - Those are some my favorites, currently loving The Walking Dead (last night was awesome).

12 Monkeys - Really liked that, only saw it once I'll definitely watch again.

Fail Safe - Haven't seen it. But adding to the watch list.

Book of Eli - I thought it was OK, kinda like The Road. I may need to revisit.

On the Beach - Never seen it, never heard of it. Adding to the list.

Boy & His Dog - This one eludes me. It's on my list, but I never remember it. Adding again now!

posted on Dec, 3 2012 @ 08:27 PM
link
Anything else -- maybe something surprising? I just love these films and could watch them every night before bed.

Miracle Mile - Sure, the special effects are cheesy. And some unbelievable events happen. But it's still a pretty interesting movie about a guy who answers a ringing phone and finds out that a nuke is about to destroy Los Angeles. Chaos ensues as he attempts to track down his new girlfriend and get out of town.

The Quiet Earth - Great movie. About a scientist who tries to commit suicide only to awaken in a world devoid of all life aside from two other people. Pretty good movie with an odd ending. And not much in common with the novel it was adapted from.

Night of the Comet - A cheesy 80's zombie movie about some random people who happen to survive by chance after a comet passes by Earth and turns most of the inhabitants into dust. The rest become decaying zombie husks.

Save the Green Planet - An off-the-wall South Korean movie about a seemingly crazy guy who abducts a business executive because he thinks the executive is an alien plotting to destroy the Earth. If you haven't see it, you should. It's crazy.

Last Night - An indie flick that came out in the late 90's about how several people plan to spend their last day on Earth when they find out that Earth is about to be obliterated. It's a low budget drama with pretty much no special effects. But it's good.

Battle: Los Angeles - A bit cheesy here and there, but very action packed. Personally, I thought it was a pretty good movie.

Plus Blade Runner, though not apocalyptic much.

posted on Dec, 4 2012 @ 04:24 AM
link
This is quite good for a somewhat unknown post apocalyptic film. Yes its about vampires, but this is no twilight bullish!t.

The Omega Man
The Postman
The Stand ( A made for TV two episode "event" that I think was good. They are currently making a box office version, directed by Ben Affleck )
Children of Men
I Am Legend
Doomsday ( A bit cheesy, but gosh is Rhona Mitra GORGEOUS )
Reign of Fire
Sean of the Dead
Southland Tales ( Strange flick. I loved it, Some don't. By the same guy who did Donny Darko )

posted on Dec, 4 2012 @ 08:37 AM
link
Darn good list! Darn good. Thanks, all. I *really* appreciate having a working movie list of this genre instead of blindly renting/steaming movies hoping it's something good. Hopefully others can use it too. And by all means, please keep adding films whoever sees this thread.

Miracle Mile - Yep, that one is listed in my OP, a surprisingly surreal movie. I've seen it probably 8 times.

Night of the Comet - Started to watch this one years ago but couldn't get into it.

Save the Green Planet - Crazy + doomsday is right up my alley. It's going on the list.

Last Night - This rings a bell, I *may* have seen this but not sure. Sounds good though, adding just in case.

Battle: Los Angeles - I liked it too. The action alone was good, but don't think I'd watch it again.

The Terminator(s) - Saw them all. Absolute classics, even liked the last one with Bale. Adding for posterity.

Stake Land - Never heard of it, but that trailer looks terrifying. Adding to a top slot on the list.

The Omega Man - I *believe* I am Legend is based on this? Need to see it, adding now.

The Postman - This is Costner film, no? I passed on it years ago, but I'll add it b/c I like Costner again.

Children of Men - Clive Owen? I think I saw this late night, but don't really remember it. Adding it.

I Am Legend - Seen 2 or 3 times. Definitely good. Adding for posterity.

Doomsday - Never heard of i,t but cheesy is ok. Adding.

Reign of Fire - I actually really liked this movie, the insanity of it, the story and the visuals (dragons!!)

Sean of the Dead - Saw this for 1st time last month. Clever and funny. Adding.

Southland Tales - Never heard of it, but enjoyed Donnie Darko. Will definitely check it out. Adding.

Mad Max - Saw all the films, but its been years it may be time to revisit.

Dawn/Day of the Dead - Those are some my favorites, currently loving The Walking Dead (last night was awesome).

12 Monkeys - Really liked that, only saw it once I'll definitely watch again.

Fail Safe - Haven't seen it. But adding to the watch list.

Book of Eli - I thought it was OK, kinda like The Road. I may need to revisit.

On the Beach - Never seen it, never heard of it. Adding to the list.

Boy & His Dog - This one eludes me. It's on my list, but I never remember it. Adding again now! 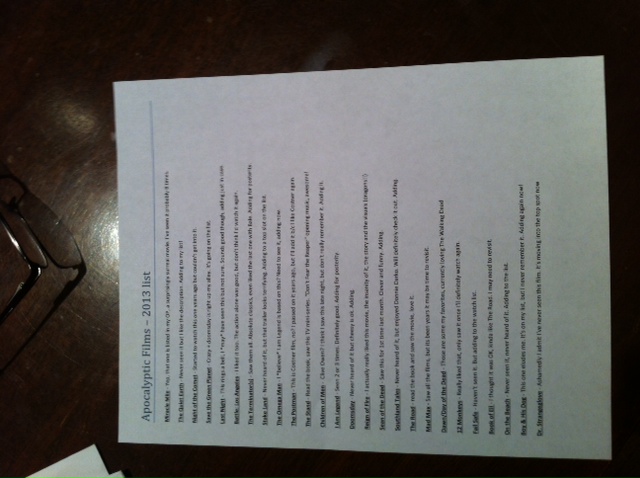 
Watched Stake Land last night, I really enjoyed it too. Thanks, DivineTragegy, for recommending it.

I tried watching Southland Tales - I got about an hour into it and just couldn't stay interested in the story. I must say though it has a great, and surprising cast. I may try to finish it.

I also started watching A Boy & His Dog - it was a little too weird for me (telepathic animal), but this one I will try again because I think I may not have given it enough time.