China has unearthed the ruins of an ancient palace near the tomb of the country's first emperor that was already famed for its terracotta soldiers, state media said on Saturday.

The discovery is the latest at the mausoleum, which dates back more than two millennia and became one of the greatest modern archaeological finds after a peasant digging a well stumbled upon the life-size warriors in 1974.

The palace "is the largest complex ever found at the cemetery", the Xinhua news agency said, citing Sun Weigang, a researcher at the archaeology institute of northern Shaanxi province where the site is located. Qin Shihuang, a ruler during the Qin dynasty (221-207 BC), presided over China's unification and declared himself its first emperor. The Qin ruler was based in Xianyang, near the city of Xian, which served as the seat of power for successive dynasties and is today a provincial capital and tourist hotspot due to its many historical sites.


Thought I'd pop in and drop this one on you.

This site it just getting more amazing [If that's even possible] with each new discovery. I'd love to see some sort of artists rendition of what they think the entire site [which is massive] would look like totally reconstructed. The first emperor really must have had his act together to have planned and orchestrated this site before his passing.

All the man hours and material alone was a gigantic undertaking. The terracotta soldiers alone are simply amazing. No two are alike and there are thousands, not to mention horses chariots weapons etc etc etc all in exacting detail.

I've been waiting for a few decades for them to get on with the main tomb complex. Hopefully before I start pushing up daisies someday soon they'll finally allow the world to see what truly amazing work of engineering, architecture and no doubt Art it could possibly have.


Pretty amazing; yes.
I agree in wanting to see at least a rough overview sketch of the site, photos, more than the crumbs we're getting.


Thanks again Slayer for another jewel of a thread on wonderfully interesting finds.


Well, we don't have pictures of this excavation, but, this one, as you mentioned, is nearby and associated with the very same Qin Shi Huang. 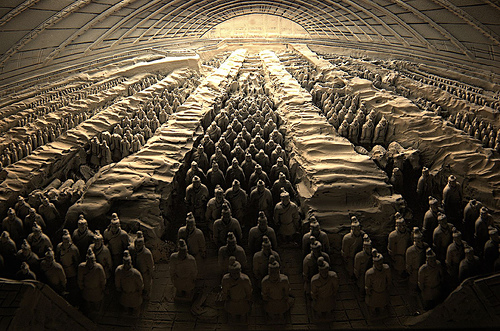 If the picture above with the terracotta figures is any indication of the sorts of majesty that might be eventually forthcoming, it'll certainly be well worth the wait in finding out.

Additionally, if I have this correct, this isn't even the mysterious Qin Shi Huang main tomb which is still under hot debate regarding whether or not, and when it'll ever be excavated.


One of the first projects the young king accomplished while he was alive was the construction of his own tomb. In 215 BC Qin Shi Huang ordered General Meng Tian with 300,000 men to begin construction. Other sources suggested he ordered 720,000 unpaid laborers to build his tomb to specification. Again, given John Man's observation regarding populations of the time (see paragraph above), these historical estimates are debatable. The main tomb (located at 34°22′52.75″N 109°15′13.06″E) containing the emperor has yet to be opened and there is evidence suggesting that it remains relatively intact. Sima Qian's description of the tomb includes replicas of palaces and scenic towers, "rare utensils and wonderful objects", 100 rivers made with mercury, representations of "the heavenly bodies", and crossbows rigged to shoot anyone who tried to break in. The tomb was built on Li Mountain, which is only 30 kilometers away from Xi'an. Modern archaeologists have located the tomb, and have inserted probes deep into it. The probes revealed abnormally high quantities of mercury, some 100 times the naturally occurring rate, suggesting that some parts of the legend are credible. Secrets were maintained, as most of the workmen who built the tomb were killed.

Very very interesting.
The main tomb is likely not going to be explored or opened any time soon either, due the extremely high levels of mercury making the whole place a toxic waste zone and extremely hazardous for anyone wanting to take a peek, even with rigidly strict hazard containment.


Is this blurry photo all they have shared or is this even it?


I think so.
I looked for new pics but didn't come up with anything of any real value to post. This is a prime example of why I have some gripes with info coming out of China. Yes, it's their history but it also belongs to humanity as well.


And so sad as the stuff is so fantastic...mind boggling wonders! I myself am a sculptor, in clay and some of the stuff they have is so amazing I just can't phantom how it was done!


Is that image real?
I hadnt seen that one before.

To think. No two are alike.


As far as I know, yes, that's a real image, and on top of that, it's only the 2000 figures that have been excavated since the initial excavation efforts got underway in 1974.

Supposedly there's 6000 more still to be excavated as part of the greater mausoleum complex where the evolution of archaeological excavation techniques over time is now allowing the figures to be revealed in full color as they were once originally painted.

Additionally, as mentioned previously, there's also that sealed tomb that's suppose to to have palace replicas, rivers of mercury, ceilings inlaid with pearls to depict the stars in the heavens, terracotta concubines, tools, weapons, utensils, and essentially a whole buried city to serve the dead Emperor including lots of treasure in the afterlife, outdoing the Egyptians by several orders of many magnitudes.

Go to the coordinates in the previous post, and look at the ground level photo that pops up. Imagine that entire hill, trees and all simply being a lid on a box.

posted on Dec, 2 2012 @ 12:11 AM
link
I saw some of the Terra Cotta army at the Chinese exhibit at the World's Fair in Knoxville many years ago.

They were very interesting, but there was another item on display there that was simply fascinating.

It was a model of a boat, some sort of ferry, IIRC, that was carved out of a single piece of ivory.

The ship was amazingly detailed, with a hundred or more people standing on deck, along with ropes, railings, barrels, awnings, chairs, all kinds of things on the deck of the ship.

The things weren't carved and then glued on, they were carved out of the solid ivory. Awnings, ropes and all.

People on the deck were no more than an inch and a half tall. When I looked very closely, I could see the fingernails on the tips of every finger of every passenger. Some of them were wearing rings on a finger or two.

Again, not glued on but carved right into the ivory.

I was completely blown away.

The ivory ship made the terra cotta soldiers look tawdry, in my view.

posted on Dec, 2 2012 @ 05:57 AM
link
Emperor Qin Shi Huang must have had many enemies, he wanted his army to protect him even after death.
The terracota army is amazing. I wonder, since no two soldiers are alike, could it be a replica of his actual army?

Originally posted by Dembow
Emperor Qin Shi Huang must have had many enemies, he wanted his army to protect him even after death.
The terracota army is amazing. I wonder, since no two soldiers are alike, could it be a replica of his actual army?


I happened to pick up an old copy of Nat Geo that was in a coffee shop today and it was about the Terra Cotta Army.
Apparently the bodies are all casts but then things like the hair, nose, chin etc etc were all added after, they used quite a few different moulds for everything so it all looks unique but if viewed closely you would see there are only 10 nose types, 30 hair types, 10 mustache types etc etc

Still bloody clever if you ask me

posted on Dec, 2 2012 @ 01:25 PM
link
Oh how I hope they release more info and pix. I just find this fascinating and cant even begin to fathom the work that went into all this. Incredible! Thanks for the link OP. SnF.

posted on Dec, 2 2012 @ 10:12 PM
link
100 rivers made with mercury, representations of "the heavenly bodies", and crossbows rigged to shoot anyone who tried to break in


no kidding riiiight. arrows shoot yah then get mercury directly into blood stream. its a mad haters dream come true!


Druscilla, Here you go, This article and video's may help to explain it all a little better for everyone I hope.
The part about the Emperors tomb starts at about 2 minutes and 20 seconds.

While China’s first emperor is being buried according to his wishes, a power struggle rages outside the tomb. By tradition, the oldest son should have become the emperor but several ministers want a younger son on the throne. The others are assassinated and there is a slaughter.


The emperor is also not going alone into the afterlife. While his chosen successors are being assassinated, hundreds of his favorite concubines will stay with their master and die with him. The tomb’s designers and builders will be sealed in the tomb too. Everyone who knows the way dies.

I am immensely interested in the First Emperor and related finds, mainly because his tomb will never be excavated (would be hugely unpopular in China). Therefore, this sort of find is at good as it gets!

The Terracotta Warriors are about as close as excavating the tomb will ever get (from an area outside the tomb). I would love to see inside the tomb though as it may well give indications on influences, gods, back story, etc. You never know though, there maybe something of immense interest within the ruins of this palace.

How one ruler could have had so much, only to die from Mercury poisoning........

This is a lasting legacy, that has so much more to give.

Originally posted by SLAYER69
reply to post by Druscilla


Well this has got me very interested, it could be that there's some evidence from the pre-Qin era.

The Emperor Qin, as most astute historian's will recall, destroyed all the history books and evidence of pre- Qin civilisation.
He had all the old knowledge burned (keeping what he needed for his dynasty no doubt) in a big pyre of fire!

It can only be hoped that the Chinese ptb don't tamper with any of what they find....