My Saiga .223 rifle project and review

First off, I picked the rifle up at a gun show here a couple months ago. I was debating about either getting this Saiga or a Mosin, and eventually chose this Saiga. It came in a cardboard box with the Izhmash sticker on it, a cleaning rod, 1 ten round magazine, a few papers and a little manual.

Here's how the rifle looks right out of the box.

I was pretty impressed on the look of the rifle. No scratches anywhere, and everything worked pretty smooth. The only slight problem was that the front sight was off a slight bit to the right, but that was fixed in a few seconds.

Before I started adding parts to the rifle, I took it to the range a few times first. No jams or malfunctions of any kind. Ive put both steel cased and brass cased ammunition through it. The most common ammo Ive put through it are Monarch 55 grain steel cased, and also American Eagle 55 grain brass case. 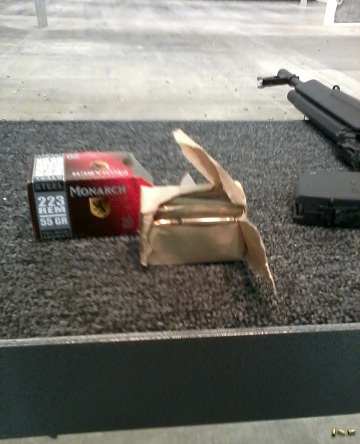 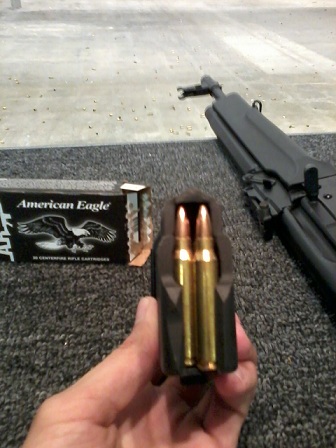 Here's one of my targets (before I fixed the front sight) at roughly 75-100 feet. A mix of both steel and brass case ammo. 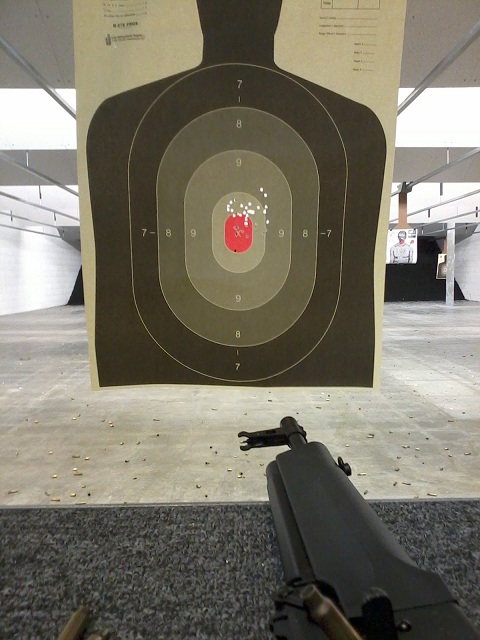 A couple things that really stood out to me while shooting the rifle - The flash on this thing is rediculous. I mean it is really really huge (there's no muzzle break on my rifle).....and I think that is pretty awesome. Second, the concussion is huge to. Third, this rifle spits out the empty casing like a beast. They get spit out with a ton of force. Ive had some get spit out and fly all the way to the other side of the range (12 lanes worth). And lastly...Ive heard on other reviews that this rifle is extremely loud compared to others in .223 Ive personally never shot another .223 rifle, so Im just going with what the other reviews said on the noise part.

Now, onto the "project" part.

My first addition to the rifle was a new front handguard. After firing 20 or so rounds, the front of the rifle gets very very hot, and the stock handguard dosent seem to do much at all. I decided to get a Tapco handguard. 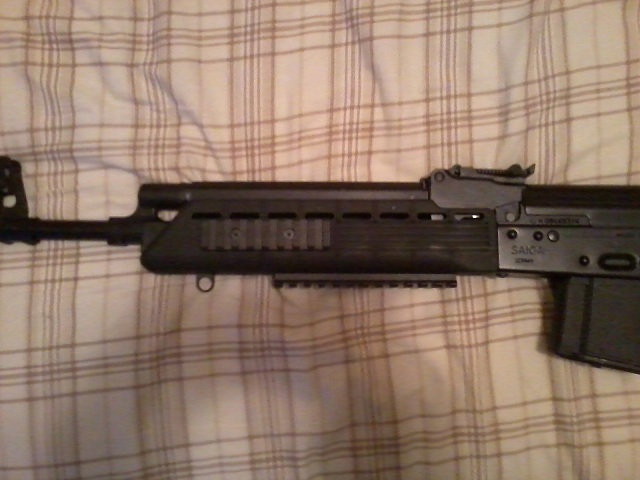 I also put on a Tapco vertical grip with that handguard and also had a 30 round SGM Tactical magazine come in the mail the same time. 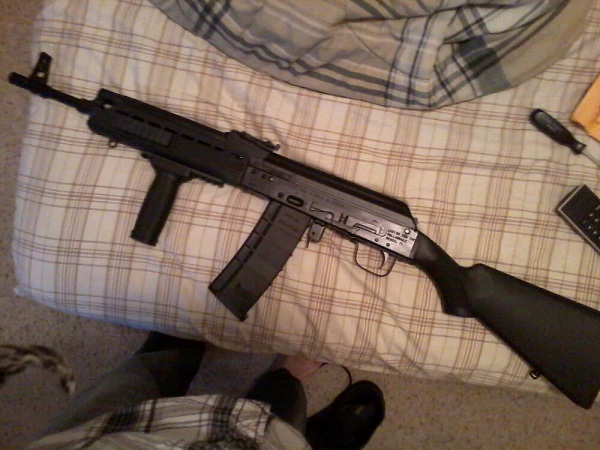 Installing the handguard and vertical grip was extremely easy. The handguard process took only a few minutes and just a few tools. It was basically just unscrewing the stock handguard, knocking it off with a hammer, and screwing the new Tapco handguard in.

The final part of my additions to the Saiga was a new buttstock and pistol grip. Again, I got a Tapco one. 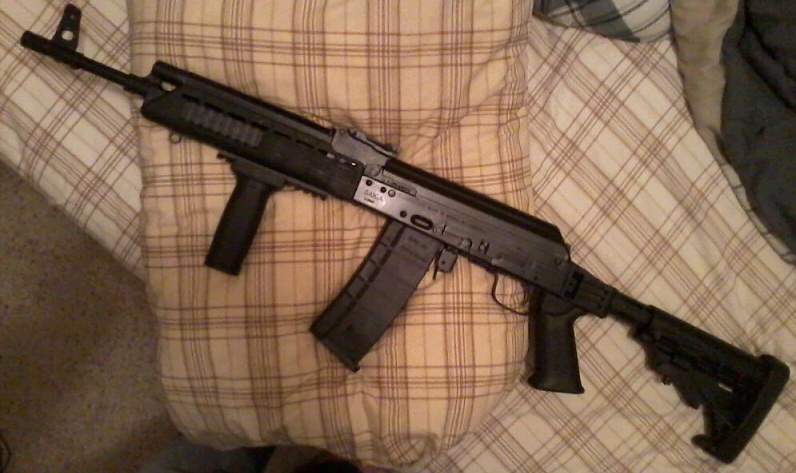 This process took a bit longer than the handguard process. 2 of the original screws in the rifle were really tough to get out. It was quite a fight to get them out. After that though, the rest was pretty easy. Knocked the original stock off with a hammer and everything on the Tapco stock screwed in pretty easy.

Well, that's pretty much all for this project at the moment. Im thinking about getting a red dot sight. If I do, I would have to get on of those side mounting sights because I would like the option of being able to revert back to iron sights if the red dot fails somehow. 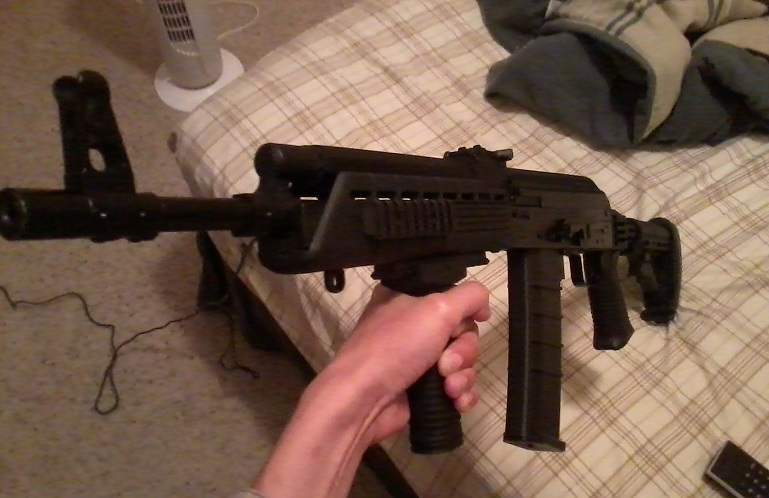 I may have forgot to put some stuff into this thread, so if I do remember eventually, I'll add in into another post in here. Feel free to ask any questions, comments, ect....


Haha, Im definantly not planning on selling this one anytime soon. This rifle is going to be around for a long long time.

I have seen some on gunbroker not too long ago that were going between $350-$400, but I personally dont like ordering firearms off the internet. I just checked gunbroker a few minutes ago and the cheapest one Im seeing is $400. Im guessing the prices will continue to go up to.

I forgot to add how much each part I added costs. The front handguard was $30, the vertical grip was $15, the SGM magazine was $30, and the Tapco stock and pistol grip was $60. (Those prices are without shipping)

I pretty much upgraded the factory Saiga into an "almost AK". Ive heard some people say they are an "almost Arsenal AK, epescially with how reliable Saiga rifles are. (I consider Arsenal's to be the high end AK's. Id like to get one, but they're $800 +). With the cost of everything I added to it, I could have picked up a WASR-10, but Ive heard of some issues with those.

There's also another gun show here on Saturday, so I'll try to remember to check out the prices on these Saiga's, if they have any.


im wasnt trying to buy it, its just good to know the value of a gun being reviewed, if i was to spend 400 i might take the next step and spend about 500 on the keltec rifle that shots .223 rounds. mind you it is a cheaper gun ive heard good reviews. and it has a folding stock, allowing you to put it in a back pack(bug out bag). it also allows you to store extra magazines in the stock, and is compatible with many accessories, i cant say for sure but i wanna say it is compatible with ar15 magazines. i wish i could post a pic but ive had trouble with posting pics latley so im not gonna try, thanks for the review bud


I think the Saiga price is quite a good deal at the moment for the quality of the firearm. Even for something like $500 I think would still be a good deal when comparing it to other rifles, such as Arsenal's AKs. Plus you have a huge range of stuff to customize it with. A very good "project" rifle. Ive even thought about getting another one and putting a Dragunov skeleton stock on it. (To make it look pretty much the same as the Dragunov rifle)

Ive heard a good deal of negative reviews on Kel-Tec pistols, but I have heard extremely good reviews on their rifles. Ive heard the same with Hi-Point pistols vs rifles. I looked around for some, both Kel-Tec and Hi-Point, rifles at the last gun show here, but I didnt see any. I hear both are pretty hard to find at the moment. If I remember, I'll look around for some at the gun show on Saturday and I'll post their prices on here.


I was debating between the .308 and .223 calibers, but eventually chose the .223. Mostly because it's my first rifle. (Im still getting used to rifle recoil)


I definantly dont have the money for that

Hopefully one day I'll be able to own something like that....

But on the bright side, I'll be going to the gun show here in less than 12 hours. Im hoping to get an SKS for under $300, but if that isnt possible, then maybe a makarov for under $200....and if that fails, Im going to get a good old Mosin Nagant.

I'll problably make a review of one of those after I take it to the range a few times.

It is a Chinese Type 56. It has the "26" stamp on it, (Jianshe Arsenal im pretty sure). All matching serial numbers, except for the one on the back of the bolt cover. From what I gather from the matching serial number, it was made in 1959. It also came with the bayonet. There's a good amount of etching and scratches on the wood, but Im a fan of that for historical rifles like these. It adds character to it in my opinion. Maybe this very rifle was used in Vietnam?