UN Vote on Palestine, the result.


As expected, the Palestinians get "observer status" at the UN.

posted on Nov, 29 2012 @ 04:10 PM
link
Is there a list yet of the yes's and no's I know or Idiot assclown foriegn minister John Baird voted NO, not at all signifying the peace loving accepting country Canada is. Him and Herr Harper can take a big wiff of my Gooch Morally corrupt P.O.S.

Originally posted by SaneThinking
Is there a list yet of the yes's and no's ...


Originally posted by SaneThinking
Is there a list yet of the yes's and no's ...


Somehow, that is the least surprising thing I have read all day.

Heavily one-sided vote it would appear, seems most of the world was in support of this outcome.


FTR I would like to back up ST here. Our Conservative fascist government does NOT speak for the people of Canada. They speak for themselves and anything that the US government wants.

posted on Nov, 29 2012 @ 04:38 PM
link
as I understand it, Palestine will be able to prosecute Israel for war crimes. I don't know how factual this is, but it would be something Israel lovers would fight against, ala U.S. I would appreciate more knowledgeable members commentary.
I find it interesting that it passes this time around. Perhaps the offensive into Gaza this month had something to do with it.

Personally, I support Israel as God's chosen people, but I don't condone most of what the Israeli politicians do. They claim to be a haven for those who are persecuted, but only so long as they claim to be jewish. The rest be damned. It is not unusual that the Israelites will go against God's will as the entire old testament is centered around their unfaithfulness, but I still believe they should be taken to task for their conduct. I also believe that the signs of the end times will be centered in Jerusalem, and focus will on the jewish people, so it is worth watching.(as opposed to the genocide and rape occurring in Africa )

As aside, I saw a story about Hungary calling for a list of Jews, and they immediately pulled out the racist, nazi card. articles.chicagotribune.com... Interestingly enough, the Jews forget the holocaust when it comes to non jews....

posted on Nov, 29 2012 @ 04:42 PM
link
Can someone explain to me what these obstacles are that the US and others keep talking about? But this is excellent news though.

posted on Nov, 29 2012 @ 04:45 PM
link
No, they aren't going to be able to prosecute anyone for war crimes. It's a symbolic position. They are given observation rights, but no voting power. It's the same status the Vatican has in the U.N.
edit on 29-11-2012 by antonia because: added a thought

When did people put faith in the UN for anything?

I personally would pull out of the UN I think it is a waste of resources.


Okay, so I was mistaken. I suspected I would be at least.
Certainly their admission as observers will indicate enough support for prosecution.
Forgive me, as I'm relatively ignorant of the U.N. and their procedures, but it just seems that the world has been ignoring the plight of the Palestinians at the behest of the Israelis.

Originally posted by Azdraik
When did people put faith in the UN for anything?


Oh I understand that.

I am one of the get the heck out of there and let them figure it out guys.
The US should not be in the middle east at all, or anywhere for that matter.

Originally posted by MeesterB
reply to post by antonia


Okay, so I was mistaken. I suspected I would be at least.
Certainly their admission as observers will indicate enough support for prosecution.

I think you are making a little bit of a leap there. Support for one doesn't infer support for the other as far as all of these countries go.


I suppose I am taking a bit of a leap.
I was just predicting under the assumption that the shift in opinion came about from the Israeli offensive into Gaza. My initial assumption may be wrong, but I don't see another reason for the change in opinion required for ratification of the observer status.


I think the offensive did have some negative implications for Israel's image in the UN, but it really should be noted they only got massive amounts of love from the U.S. and those countries which the U.S. has wrapped around their finger. Europe and Asia don't seem to have wasted much love on them in the last 10 years. I think the offensive just brought it to the table earlier than it would have been brought otherwise.
edit on 29-11-2012 by antonia because: added a thought


Where can I see all the votes? I want to know so I can speculate where each nations allegiances lie. (as pertainting to religion, ruling class, and ethics)


On one of the other duplicate threads on this there is a full list posted of those that abstained and those that voted no.


All I can find is a bunch of opinions, and I want to form my own.

Originally posted by antonia
...but it really should be noted they only got massive amounts of love from the U.S. and those countries which the U.S. has wrapped around their finger.

Do you know how much it hurts to see your own government doing the will of another? Against it's own people? 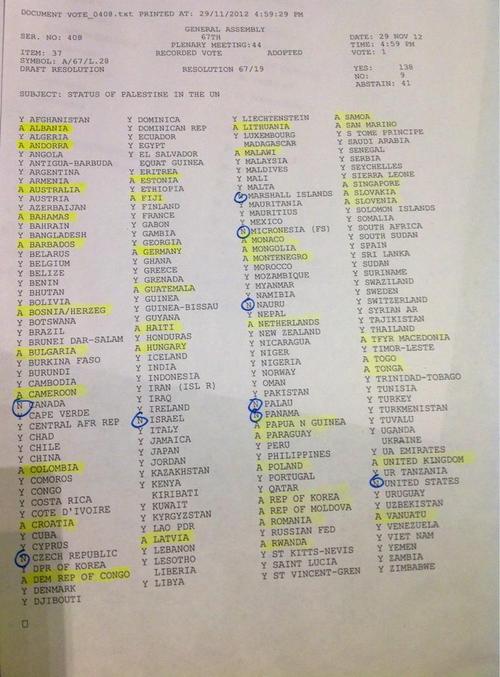