Behind the curtain of the Great and Powerful Grover Norquist

Tonight I've found a fun little snippet, while setting up a neighbors new computer ( bored and surfing the web while Windows 8 did an eternal install of every app known to man ) of a subject that I've done two previous threads upon...

GAME OVER: Grover Norquist! The Most Dangerous Man In America Falls.

An Open Letter To All Republican Office Holders And Candidates For Office:

Well, it seems that someone with a louder voice than mine has joined in the fray - as Yahoo is currently carrying the following: 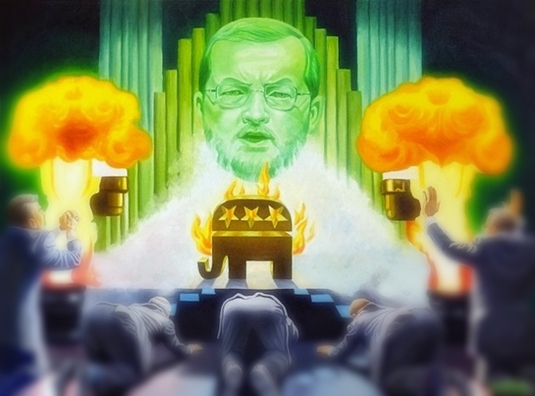 
Behind the curtain of the Great and Powerful Grover Norquist

WASHINGTON—If aliens landed in Washington, D.C. right now, they might assume in their search for a terrestrial leader that a bespectacled man called "Grover Norquist" controlled the planet's most powerful nation. They might also conclude that this person had magical powers.
The misunderstanding wouldn't necessarily be their fault.
Grover Fever has swept the nation's capital this week, shortly after thousands of politicos waddled back into the city after a Thanksgiving break. After years of notoriety in Washington but near obscurity elsewhere, Norquist is becoming a household name around the dinner table.

"The Colbert Report" recently devoted a feature to Norquist, portraying the 56-year-old Harvard graduate as an omniscient creature whose power knows no bounds. Norquist has been all over cable news shows and the subject of lengthy profiles in prestigious newspapers and magazines. Outside Washington's Metro stations this week, hawkers handed out free tabloid dailies bearing the image of his face. Politico devoted an entire hour to him at a newsmakers breakfast on Wednesday morning.

His name is on the lips of top Democrats in Congress who blame him for single-handedly bringing the United States of America to an immediate standstill. Norquist is "one obstacle standing between Congress and compromise," Democratic Senate Majority Leader Harry Reid exclaimed from the Senate floor on Tuesday morning.

His crime? Norquist has persuaded more than 1,000 politicians to sign a pledge never to raise taxes through his organization, Americans for Tax Reform (ATR). But with Congress now debating how to avoid the so-called fiscal cliff—a series of tax increases and spending cuts scheduled to kick in Jan. 1 if a budget deal isn't reached with President Barack Obama—some Republicans appear to be wiggling away from Norquist's grip.

A few GOP lawmakers have voiced a willingness to eliminate deductions within the tax code, which, without offsetting tax cuts elsewhere, would technically violate the pledge. One of the possible pledge violators, Republican Rep. Peter King of New York, called Norquist a "low-life" and said his wife would "knock his head off" after Norquist compared the taxpayer pledge to King's marriage vows.

But Norquist is like a bearded Lernaean Hydra, which grows only more powerful the more you attack it. The evidence? A majority of Republicans have not publicly joined the rogue moderates, reinforcing the narrative that they remain under Norquist's binding spell.

So, it seems with the fiscal cliff ( read - ZOMG distraction of the season ) looms in front of us - and we are sure to get something ending with the suffix "gate" thrown at us on the nightly news any day now... Old Grover is finally being portrayed in his rightful visage of the man behind the curtain of the GOP, the great and powerful Oz.

I imagine that some will float in to drop their synthesized and practiced chants of "taxes bad". That is to be expected, and I do respect the enthusiasm with which these folks post. Being passionate is a good thing - even if I happen to disagree with it. I will respect it.

What has Grover done to tear down his own house of cards? Well, you see - America is about to go belly up and when his Republican "pledge signers" went to him and said "Gee Grove, ole buddy. We gotta close some of these tax loopholes for the rich and for businesses..." Grover sternly replied...

If you close the loopholes without equally lowering the taxes on those same folks - you'll have broken your promise!"

Therein lay the problem. The people who sit their overpaid butts in the seats marked for my state and my district in Congress - they are beholden to ME and to MY COMMUNITY! Not to any sad sack lobbying by the name of Grover Freaking Norquist!

No, I am not at all sure if his middle name is "Freaking" or not. However poetic license drives me to hope so.

Ladies and Gentlemen, just because this man speaks similar homilies as you, does not make him your protector. This is a man so obsessed with the idea of taxes that he's quite willing to destroy the United States just to ensure that he gets his way! It makes one wonder if maybe Grover doesn't have a "Once America falls this is how I'll use my influence to become Emperor of New America" agenda hidden somewhere behind those hate filled eyes.

Did you know this man commands so much respect that every Wednesday conservatives flock to HIS office to get their marching orders directly from the source? Hillary Clinton referred to these meetings as ",,, the vast right wing conspiracy." and reporters are allowed to attend it - but only if they agree not to divulge details of those meetings.

I put it to you, good folks of ATS, that this man, and a handful of others like him, are the fat hindquarters who are ripping the fabric of the jeans that are our nation apart. Those, like Norquist, are a tumor upon our Republic and upon the very ideals of a free and leading society. Make no mistake... the GOP loss this November has made this snake ornery and he is sure to call his troops to battle.

Is his vision important enough to discard care to the wind and to watch the country burn? Is it so important an issue that we're willing to condemn ourselves to second world status just to let this reprehensible provocateur have his way?

Mr Norquist, now that we've been through the past five years, America has grown up enough to cut our own meat and choose our own side dishes. Your presence at our table is no longer needed. Even the mainstream media, which so covets your wealth and power, are no longer afraid of the Big Bad Wolf...

If you'd like. there is an open seat at the kiddie table. But if you want it you'll have to promise to play nice and to be polite.

America is watching you Sir. I have no doubt that your ego will blossom and the truth of you will become apparent to even the staunchest of your fans and believers.

posted on Nov, 28 2012 @ 09:59 PM
link
And that curtain is bought and paid for by billionaires like the Koch bros, whose father helped found the John Birch Society.

The disclosures show that only two billionaire-backed groups have provided over 66 percent of Norquist’s funding:

When David Koch ran to the right of Reagan as vice president on the 1980 Libertarian ticket (it polled 1 percent), his campaign called for the abolition not just of Social Security, federal regulatory agencies and welfare but also of the F.B.I., the C.I.A., and public schools

the historian Kim Phillips-Fein labeled “Invisible Hands” in her prescient 2009 book of that title: those corporate players who have financed the far right ever since the du Pont brothers spawned the American Liberty League in 1934 to bring down F.D.R. You can draw a straight line from the Liberty League’s crusade against the New Deal “socialism” of Social Security, the Securities and Exchange Commission and child labor laws to the John Birch Society-Barry Goldwater assault on J.F.K. and Medicare to the Koch-Murdoch-backed juggernaut against our “socialist” president.

Sign a lobbyist's pledge, pledge allegiance to a lobbyist...American govt bought and paid for.

but I do not believe you have said, or even speculated, about what it is that his consignees receive for their loyalty?

more power, I assume. money is too petty for this level of corruption.

posted on Nov, 29 2012 @ 10:30 AM
link
Ever since I heard about the Norquist pledge, and I only heard about it 4 or 5 years ago, I have wondered about why people would actually sign it. I now understand it's basically a blackmail situation for a Republican: "SIGN the pledge or your political career is over!"

This is appalling. Making a pledge to an individual that takes precedance to the people's will is sickening to me. And when I say sickening I really mean it.

Would any of those politicians have ever considered making a pledge to me or you?

Absolutely not! We don't have the money to command that kind of submissiveness or servitude.

I'm sick of this selfish, greedy, self-serving man who wants our legislature to serve his needs. This is 90 percent of what causes our current political paralysis. Just look at how it will play out in this current fiscal cliff issue. We will have one side that is absolutely unwilling to budge on increasing tax rates for the rich. They can't. Grover Norquist has his foot on their face and his recent interviews has revealed that his basic attitude is going to be, "YOU WILL OBEY!!"