The Inescapable and Encompassing Power of MEH!

Is there logic in the fact that I am about to rant about the fact that I don't feel like ranting at all? You're damned skippy there is! In fact I intend to state a formidable case, momentarily, the apathy and feeling bland are possibly the most worthy of things to rant about.

You see folks, tonight I feel meh and this bothers me deeply. Well, not really deeply because the freaking meh is disengaging my righteous anger before it has any chance at all of taking hold. But if I were currently capable of any strong emotion... you can bet I'd be furious!

As a person who believes in an amalgam of both evolution and intelligent design, I am left baffled at the though that either process could result in us, as beings, having the power to simply feel this blah. Heck, I'm having trouble just trying to find appropriate terms to describe the feeling! THAT is how much we ignore the problem!

I get the darned French have about eighty words for it. Those French and their words that nobody else has. One day I'll work out of this mehness and rant about that too. I mean I don't have language envy - but why French? Why a language that is so darned difficult to phonetically spell in? Sure, we all know deja vu... but what about that term for "a certain something" that is phonetically spelled "jen-no-say-kwa"? HUH?

Oh how irked I'd be over that if I were able. But even now... The meh is overpowering.

Could meh be the dark matter or dark energy that they say makes us most of the universe? Is THAT why is tends to be so pervasive and profound? It fits, doesn't it? Man can detect 10% of the matter in the Universe. The rest is meh. It works for me. If I didn't feel so blah I might even write an email to Stephen Hawking about the possibility of a meh based Universe. Who knows... I could be on to something.

Is there a known cure for meh? If there is, I certainly can't find it tonight. I could lick a light socket and, once I woke up, I'd just go "Should have seen that result coming" - and I'd be right back here adding a "Yup, extreme electrical shock didn't work. Now my tongue is both meh AND numb...."

Of all the evils, trials, and tribulations that life has to offer, I conclude that meh is the most graphically and brutally vicious of them all. At least most other emotions have some sort of passion attached to them - they feel alive and vital - even the bad ones. But Mr Meh... well he just makes you feel like you're sitting at the DMV with a stub that says "719", staring at an electronic board that says "Now Serving Number 8"....

While I am at it, they say that money is the root of all evil - but I offer that meh is actually the culprit. I mean greed can lead you into doing some shady things. But they aren't usually stupid things. Whereas meh has me thinking "I could go outside and try to find a rabid possum to corner... that'd be fun at least.". No, good denizens of ATS. Money is not our problem at all. In fact, as I think about it, you know how money was created in the first place? Some dude was feeling meh way back in the day and inventing money was the end result. Two World Wars... My theory? Germans have a genetic predisposition towards feeling meh. Nuclear weapons. It's common knowledge that Oppenheimer was prone to meh as well.


The power of meh is formidable. I too would be very angry with meh right now if I were not so meh.

I am so meh right now, I have been going back and forth between ATS and checking the weather online for what seems like an eternity.

I have watched this video 6 times in 3 hours. That is MEH!

I'd have more to say if i weren't suffering with you.


I want to show up at that persons 18th birthday party and beat them senseless. But I'm still meh.

Why are bad things always so enthralling????


my Daughter uses that word rather a lot, seems to mean 'whatever' or even non-challant/melancholy.

I think it is only a recent saying? I have only noticed it in the last couple of years. It isn't something I say, maybe not my generation...

this might break you out of the way you are feeling.

To elucidate - being filled with unbelievable levels of not caring at all.

As a person who believes in an amalgam of both evolution and intelligent design, I am left baffled at the though that either process could result in us, as beings, having the power to simply feel this blah. Heck, I'm having trouble just trying to find appropriate terms to describe the feeling! THAT is how much we ignore the problem!


Caring about things that matter uses up a lot of emotional energy, he just needs a recharge.


yeah seems to be like that. I will be all upset about some random event and she will just say "Meh" and stay the same mood when I am all upset about it... so those People who use the word "Meh" are probably more happier than those that don't?

posted on Nov, 27 2012 @ 02:11 PM
link
Your "meh" is my apathy, and the only good thing about my apathy is that it is one of the few things I hate with a passion. Just the thought of apathy gets me all wound up. It is something that annoys me to no end. When I start feeling apathetic, I climb the walls, simply because I hate it so much that I don't give a damn....and once that self hatred kicks in, I feel much better, because self loathing is an emotional state that I prefer much more than not caring. I guess now might be a good time to mention I have some emotional dysregulation issues?

Heff, I hope your "meh" dissipates soon, and you can get back to your usual empassioned self, but if it makes you feel less "meh" at least know even in your moments of "meh" you still manage to make me feel not "meh", cause I care about your "meh" 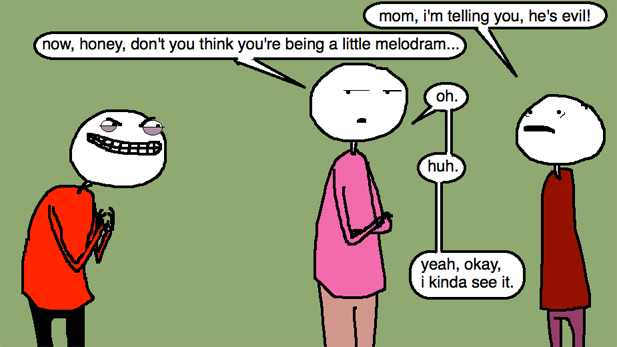 I just don't get what the cartoon's point has to do with Meh... can you draw me another picture? 
ok so the dude is being relaxed about the evil or not caring?


ok I get it. Been bashing my head with spreadsheets all day so no wonder, I need pictures drawn for me lol