A tale of two suns

posted on Nov, 26 2012 @ 06:25 PM
link
I have been itching to dispel the myth of the twin suns, which is really an atmospheric phenomenon that has been going on for thousands of years.

There was a sign in the sky of six (not two) suns for about two hours(Painting shown below). As usual the religious nuts attributed this as a sign from God (who apparently wasn't happy with the King for allowing Protestantism to persist in his kingdom).

Since history tends to repeat itself, it doesn't surprise me that Nibiru fans and doomsayers would attribute this atmospheric phenomenon to presence of some imaginary and elusive planet ready to unleash hell on earth. 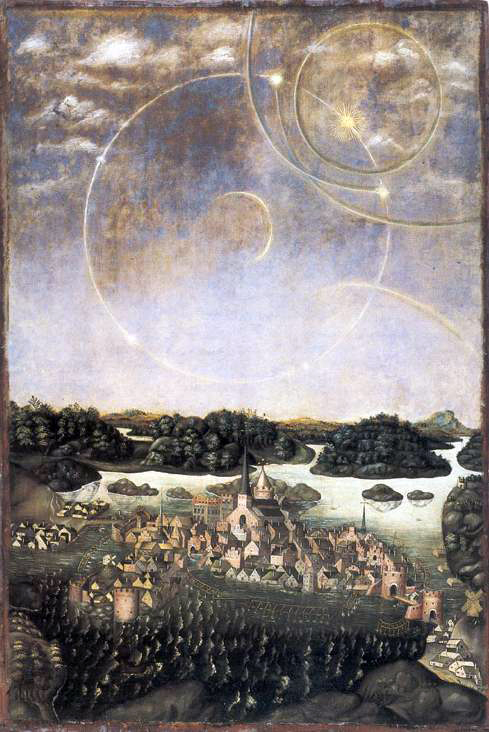 A very nice young fella filmed four suns, the video has that wow factor (that "i am just an insignificant fly in the cosmos" kinda thingy). It's so beautiful and breathtaking that I almost thought that the second coming had come so i could remain here on earth and be single again


For more information on sundogs or moondogs please check out this Site. This site will tell you everything you need to know about sundogs.

If Nibiru was a planet on collision with earth, then i think it is safe to say it would be visible by now. I can see Jupiter every night and i think it is on average 5.2AU from earth. An imaginary planet assassin named Nibiru would have to be visible by now, unless Nibiru is wearing some kind of cloaking material

Finally some history and facts to back up an argument, I love it ( is in heaven)

Personally I knew about this historical event but I don't frequent the 2012 forums much....


I think this will gather some attention. Nice presentation.
I wonder if they were looking through glass 1535.
edit on 26-11-2012 by randyvs because: (no reason given)

posted on Nov, 26 2012 @ 06:50 PM
link
You do realize that this won't be the end of it? The last I heard, Nibiru is now invisible. If no one can see it, apparently you can't prove that it doesn't exist--see how neat that works out?

I don't know how much longer it can remain an invisible threat. At some point even the most avid followers would have to ask .... or not, I suppose....

That video was really neat too. I never get to see anything really awesome like that "in person," maybe I should go outside more. lol.

posted on Nov, 26 2012 @ 06:55 PM
link
A real meteor with 30% chance of hitting Earth, I think that would probably be causing a collective international crapping of pants. Probably not true.

99942 Apophis was 2.7% and I think it's the official record holder. It still might hit us with that whole "god hates you 1/2 mile wide gravitational keyhole".


I was just being sarcastic about the meteor impact of 2013

We had spectacular iridescent clouds recently as well as a solar halo and sun dogs.

There is plenty to see - go look for it.

Be it so, said Tubero; and since you invite me to discussion, and present the opportunity, let us first examine, before any one else arrives, what can be the nature of the parhelion, or double sun, which was mentioned in the senate...


Technology my dear Watson. If they really want that, it will happen.


Are you not aware as to what will happen next year???


Are you not aware as to what will happen next year???


What is supposed to happen next year?