posted on Nov, 26 2012 @ 08:15 AM
link
An investigation into a motif of the Liangzhu culture which in my opinion gives every indication that around 5,000 years ago they shared in the then widespread concept of horizon based portals of Heaven, or 'stargates', this then a follow on my threads on other examples such as Stargates of Iran and Stargates of Tibet, with which i would suggest, not unsurprisingly, the greatest similarities.


The Liangzhu culture (3400-2250 BC) was the last Neolithic jade culture in the Yangtze River Delta of China. Its area of influence extended from around Lake Tai north to Nanjing and the Chang Jiang, east to Shanghai and the sea, and south to Hangzhou. The culture was highly stratified, as jade, silk, ivory and lacquer artifacts were found exclusively in elite burials, while pottery was more commonly found in the burial plots of poorer individuals

The jade from this culture is characterized by finely worked large ritual jades, commonly incised with the taotie motif. The most exemplary artefacts from the culture were its cong (cylinders). The largest cong discovered weighed 3.5 kg. Bi (discs) and Yue axes (ceremonial axes) were also found

A neolithic altar from the Liangzhu culture, excavated at Yaoshan in Zhejiang, demonstrates that religious structures were elaborate and made of carefully positioned piles of stones and rock walls: this indicates that religion was of considerable importance. The altar has three levels 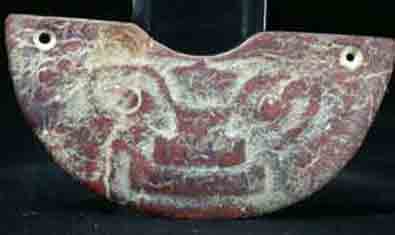 This being China good quality information and images on those Mountain Altar sites is hard to come by, but they seem to have been of a stepped form similar to say the Iranian or Tibetan examples, associate with 'mountain' and the portals of the horizon, my general theme.

Happily there are many available examples of the Taotie motif which i will be concentrating on here, the general blurb for this will indicate it is some sort of face representation or mask, which it may have become seen as in later periods, but it certainly wasn't such when represented by Liangzhu culture. 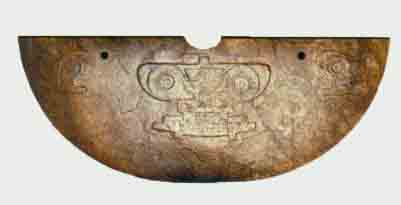 
The finest examples were it is depicted are on the Jade Cong artifacts, which for the Neolithic period demonstrate astonishing qualities of craftsmanship and style, these are generally considered symbolic representations of the circular Heavens and squared Earth in harmony. 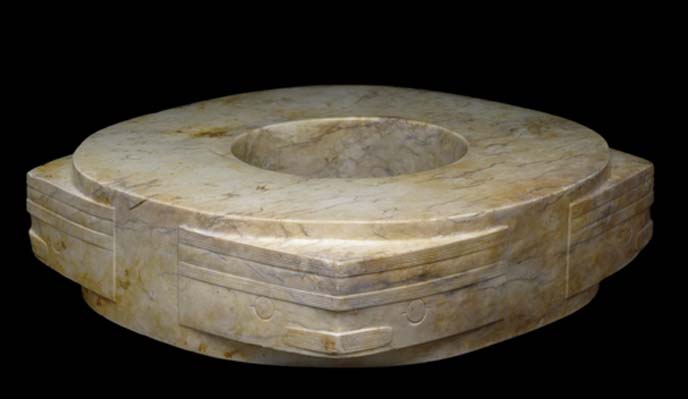 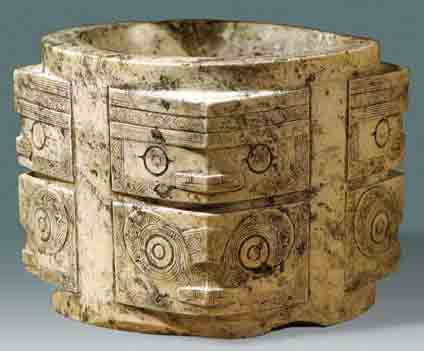 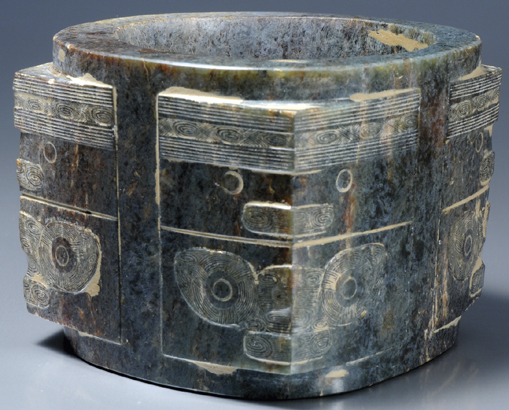 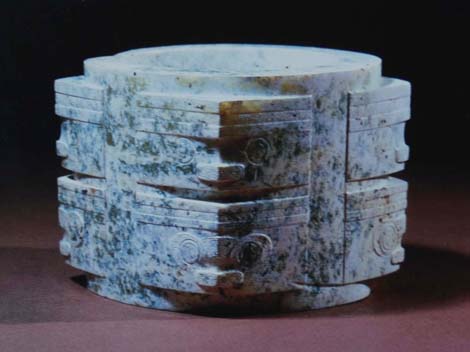 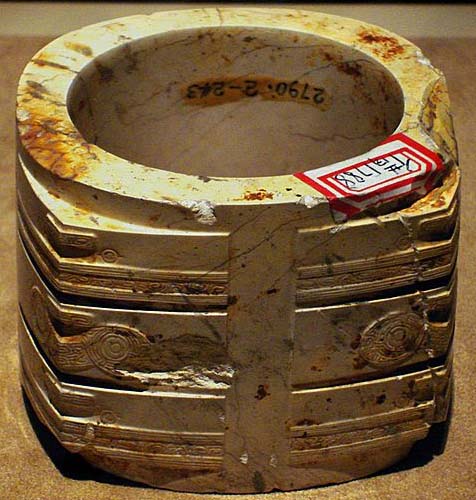 The general context here then is an association with the four quarters of the Earth, and perhaps circumnavigation or translation between the four sides, it must also be noted that the circles indicatve of the Taotie motif can also be seen without the greater super-structure of the motif, thus the Taotie could be seen to bind pre-existant phenomena.


To establish that the Taotie was neither a face or mask, and could be seen as a form of artifact, examples need to be considered were it is seen to be held by a presiding Deity; 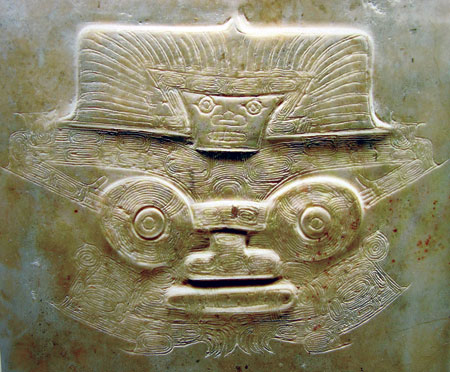 Others have noted similaraties between this Deity and that seen at Tiwanaku, and certainly there are similarities, particularly were he is seen to hold a serpent in each hand. It is this iconography also which most clearly establishes that the Taotie circles/spirals were understood as portals of the Horizon, which were inter-connected by serpents, this the most important aspect of the Iranian stargate tradition. 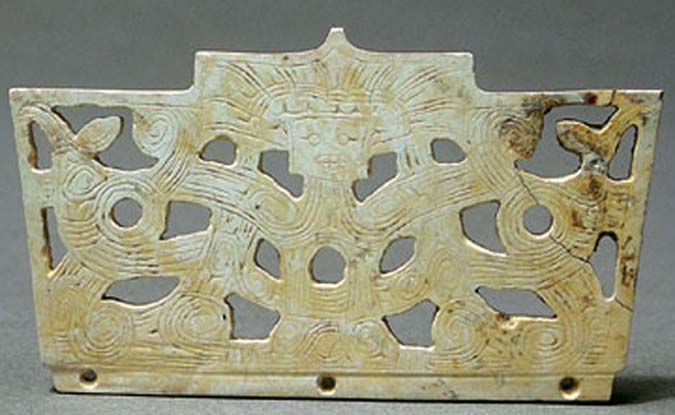 The context for the artifacts is that they are grave goods, the importance of the Taotie in this regard is the translation from the Western horizon at death to be reborn in the East as the Sun, the common metaphor for funerary traditions, transition across the arc of the sky and translation through the underworld, generally facilitated via serpentine passageway. 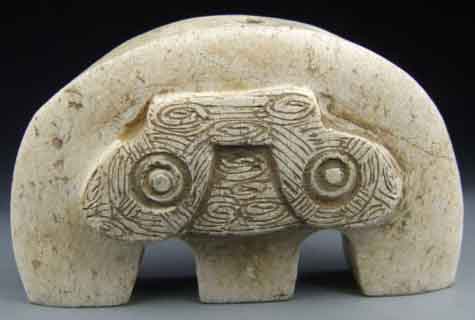 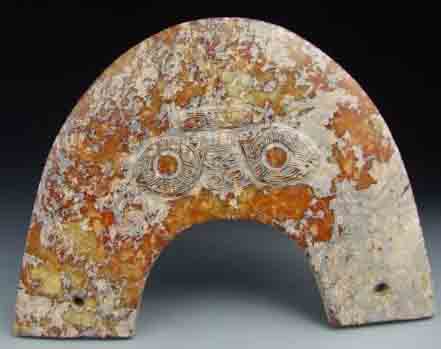 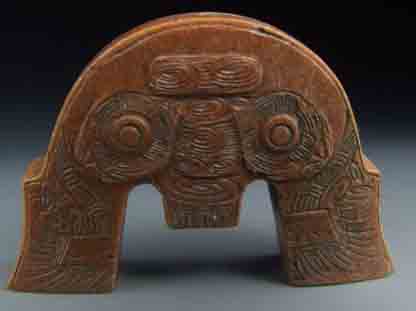 In conjuction with this the motif can be seen on animals. birds and fish, one assumes in the sense of spirit guides though the underworld; 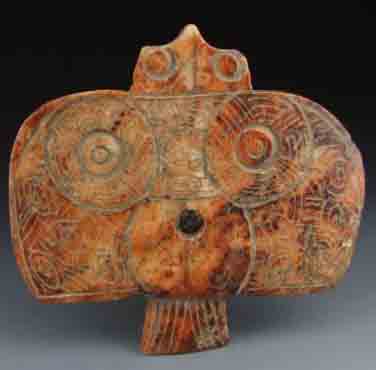 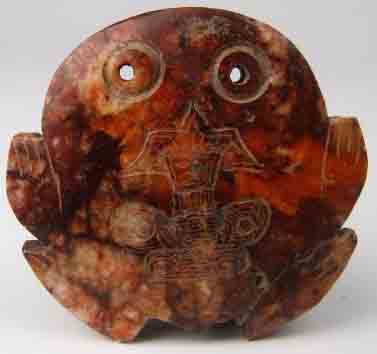 That the Taotie then represents these horizon/mountain based portals joining Heaven, Earth, and the Underworld and the serpentine passageways that inter-connect i have no doubt, nor of their role in funerary custom, the question that remains is was this tradition based upon an technological artifact that facilitated transition between other dimensions or worlds, to which of course i can provide no definative answer.


There are examples of what can be refered to as 'King of Congs', were the form is extended and rectangular, ie of many levels, it was common practise to consider the Heavens and the Underworld to consist of numerous levels, but these remarkable artifacts are veritable elevator shafts... 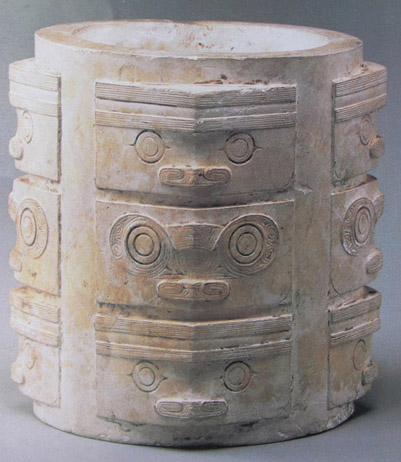 Whilst such artifacts would only be found in the highest status burials, it was the case that ceramics would more likely be placed in the graves of commoners, and indeed it is the style of these that suggests possible development of these ideas from Cucuteni and Trypillia dating to around 7,000 years ago, here is a Chinese example; 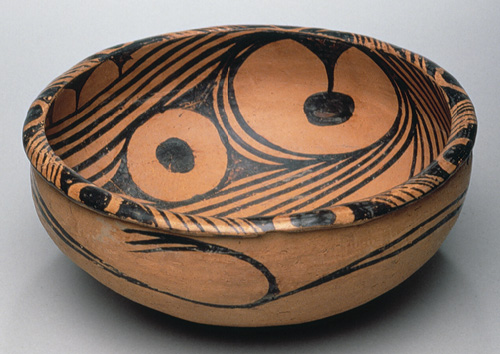 And Here i looked at such spirals in Cucuteni and Trypillia, including the origin of the Yin/Yang motif.


In general i consider these traditions to have originated during the Neolithic period, and whilst still commonly represented and incorporated into funerary beliefs during the bronze age , to have been increasingly less understood. 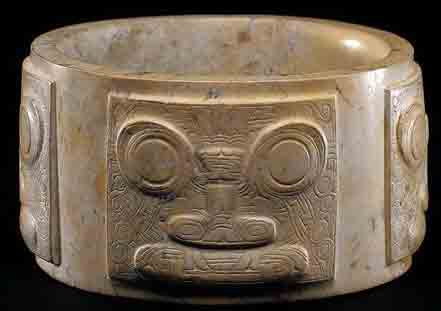 There was a large thread called Aliens of Ancient China which took an interest in carved masks very similar to those seen on that Totem,


S&F A very worthy thread. Needs a bump up.

Others have noted similaraties between this Deity and that seen at Tiwanaku, and certainly there are similarities, particularly were he is seen to hold a serpent in each hand. It is this iconography also which most clearly establishes that the Taotie circles/spirals were understood as portals of the Horizon, which were inter-connected by serpents, this the most important aspect of the Iranian stargate tradition.

it should be noted that the native American cultures of south America held the belief that the universe was a large blue bowl. They were obsessed with the four directions of the earth, the fifth direction being a little more spiritual, or metaphysical, implying a dimensional aspect to it, where earth met "heaven". Or the proper place where Gods came from /went to.

South American mythos are littered with serpent iconography, and lore.

Interesting stuff. Perhaps this understanding implies a curvature to the nature of the universe?

It is interesting that the snake symbolism is used in the middle of the sections always. I would guess that it implies a transitional power attributed to it, like a tunneling concept between planes of existence. If we were to imagine that one of those sections represented our realm and the others were representative of other realms, then the midway point to both would only be accessible through the snake master, or tunnel master....You must be master of slipping into them....and that each plane of existence is divided into their respective quadrants....

The basic geometric configuration of the square representing the Earth and the circle the Heavens is interesting and common to both Chinese and Mayan culture. Previously i have looked at the generation of parabola from rectilinear form, the development of serpentine curvilinear waves, establishment of stable 'worm holes'


An Iranian example the Chinese would have been pleased with; 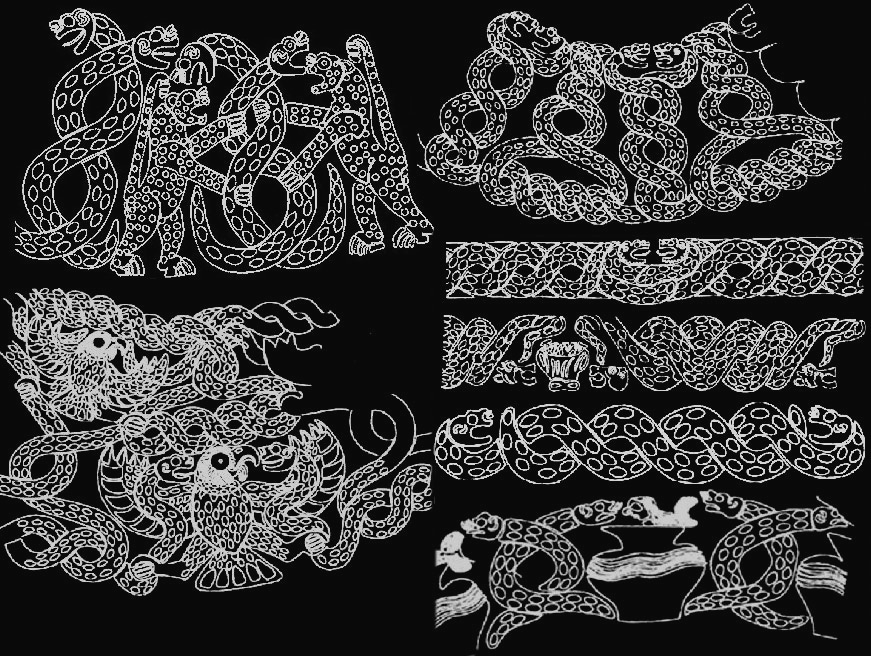 I will probably need to look more into this. 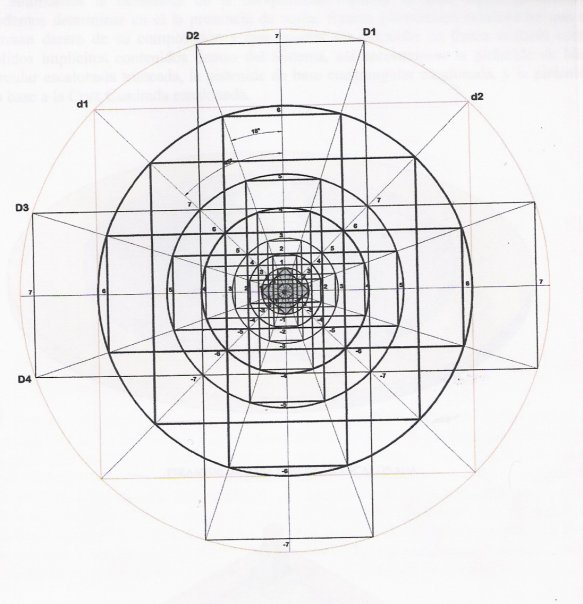