Hold on your founding fathers were terrorists to my ancestors
One mans terrorist is anothers freedom fighter.
TPTB use this word to instill fear into us so we will do what they want, just don't fall for it.


The term "terrorist" is subjective. In modern times, the founding fathers are considered freedom fighters. In the Colonial times, Britain would have seen them as "terrorists."

It is all a matter of perspective.

I think i am lucky

The term "terrorist" isn't used extensively over here. Two "terrorists" (or as we call them), Muslim extremists were arrested the other day planning an attack on civilians down here...

But yes, the term does get annoying.


I'm with you on this one. Every freakin' day, you hear something about potential terrorists, terror plots, terrorism on the rise, threat level alerts...It's mind numbing to the point where when I even hear the word, I either turn off the TV, turn off the radio, or leave the room.

On ATS it's one thing, only because of the nature of our content. But elsewhere, I do not need to hear this word repeated this much.

Terrorism isn't even a word anymore. It's a comma.

Usually because the one's shouting terrorists are the terrorists themselves.

I just typed terrorist into my phone dictionary to see if I had the correct spelling and this is what came up:

a person who tries to frighten people or governments into doing what he/she wants by using or threatening violence: The plane was hijacked by terrorists: (also adjective) terroist activities.


Maybe you are a terrorist!

Only kidding, I'm sick of hearing it too. Terrorists, terrorist, terrorism ad nauseam.

posted on Nov, 26 2012 @ 06:52 AM
link
We are entering a very dangerous period............history will record this time as the birth pains. When governments of the world cannot even agree on a correct definition for terrorism then we are all in trouble.

It is not only individual agencies within the same governmental apparatus that cannot agree on a single definition of terrorism. Experts and other long-established scholars in the field are equally incapable of reaching a consensus.
In the first edition of his magisterial survey, “Political terrorism: A Research Guide,” Alex Schmid devoted more than a hundred pages to examining more than a hundred different definitions of terrorism in a effort to discover a broadly acceptable, reasonably comprehensive explication of the word.
Four years and a second edition later, Schimd was no closer to the goal of his quest, conceding in the first sentence of the revised volume that the “search for an adequate definition is still on” Walter Laqueur despaired of defining terrorism in both editions of his monumental work on the subject, maintaining that it is neither possible to do so nor worthwhile to make the attempt.”

Nonetheless, Hoffman himself believes it is possible to identify some key characteristics of terrorism. He proposes that by distinguishing terrorists from other types of criminals and terrorism from other forms of crime, we come to appreciate that terrorism is:

1. Ineluctably political in aims and motives
2. Violent – or, equally important, threatens violence
3. Designed to have far-reaching psychological repercussions beyond the immediate victim or target
4. Conducted by an organization with an identifiable chain of command or conspiratorial cell structure (whose members wear no uniform or identifying insignia) and
5. Perpetrated by a sub-national group or non-state entity

If I was a conspiracy theorist, I'd think that definition pretty much sums up the word "War". 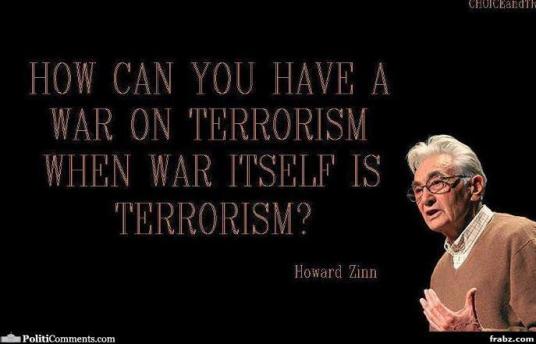 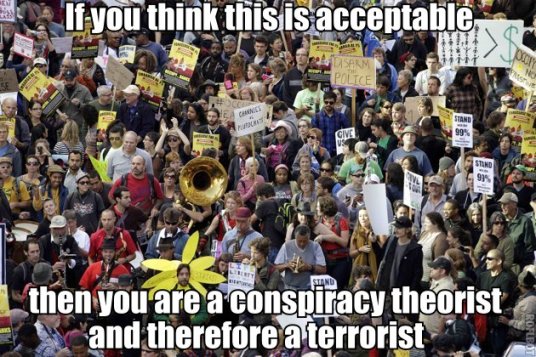 Short of a literal act of God, we appear to be rightly screwed!

posted on Nov, 26 2012 @ 07:06 AM
link
Having a distinct enemy grants the ability of certain behavior by people or groups in power. It allows the people or groups in power to attack or demonize specific groups or individuals who may be considered a threat to the current paradigm of control.Ever notice the seamless shift from communism to terrorism during the 80's once the USSR collapsed? Ever notice how even the conditions of terrorists have shifted within governing culture? We went from foreign terrorists, to foreign terrorists within the U.S., to domestic terrorists.I'm sure this evolution of terrorism has been completely natural, and there is no intentional reasoning between the negative associations of terrorism in regards to the citizens and the growing discontent between the citizens and their government.
edit on 26-11-2012 by GD21D because: (no reason given)

.Anyone who has a full pantry is now a terrorist. If you're a gun owner,you're a potential terrorist.

And yet up here in the snowy north, we're told to have excess food and water in case of disasters. They've told us it could be at least 3 weeks before we see help after a natural disaster.

They don't like us armed in the cities, but they've managed to finally kill our "long gun registry" making it fine for farmers and hunters to own rifles.

So glad to see Canada doing the opposite of the US.

There's still a lot of room for improvement up here. As long as Harper keeps doing the opposite of "the leader of the supposed free world"......

Sigh, Mamabeth, I agree. I was just having a phone conversation with a friend, discussing how "Doomsday Preppers" were now considered terrorists. We remarked about Big Brother listening in to the call and how odd it would be if they branded us for even discussing it. Just when we said that, the line went dead. Creepy. Anyway, I think the terrorist label is a very convenient tool for our government to work its own agenda.

And yes, Monkeyboy, Mamabeth's avatar is one of my favorites on ATS. It's the perfect blend of poetry and cats.

The founding father worship urks me tho.

The Whiskey Rebellion, or Whiskey Insurrection, was a tax protest in the United States beginning in 1791, during the presidency of George Washington. Farmers who used their leftover grain and corn in the form of whiskey as a medium of exchange were forced to pay a new tax. The tax was a part of treasury secretary Alexander Hamilton's program to increase central government power, in particular to fund his policy of assuming the war debt of those states which had failed to pay. The farmers who resisted, many war veterans, were fighting for the principles of the American Revolution, in particular against taxation without local representation.

The Federalist Party was the first American political party, from the early 1790s to 1816, the era of the First Party System, with remnants lasting into the 1820s. The Federalists controlled the federal government until 1801. The party was formed by Alexander Hamilton, who, during George Washington's first term, built a network of supporters, largely urban bankers and businessmen, to support his fiscal policies. These supporters grew into the Federalist Party committed to a fiscally sound and nationalistic government. The United States' only Federalist president was John Adams; although George Washington was broadly sympathetic to the Federalist program, he remained an independent his entire presidency.[1]

well Now its Terrorists under your beds.

TPTB are just messing with your heads.