posted on Nov, 25 2012 @ 01:31 AM
link
This is my first time starting a thread but I thought this was so outragous I had to share it. Has anyone seen this story. Destroyed Painting

This elderly lady apparently took the restoration of a 19th century fresco into her own hands and completely destroyed it. I'm guessing she is senile or has dementia, something must be wrong with this ladies mental functions to believe she has the ability to restore artwork.

Her final product doesn't even look human. I'm not sure what it looks like maybe an orangutan.

Photo of painting before and after

This is a conspiracy site so I have to ask. Could there be something more to this. Someone trying to make a statement of some sort.

I put this is the wrong forum, will a mod please move it to correct one. Like I said, it's my first thread. So Sorry

on ATS .. hit the search

So well known, that memes have been made about it... 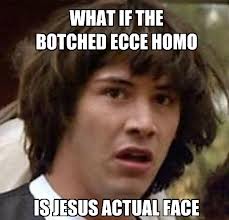 
That is just horrible.

Not only are the brush strokes not going to match, but the type of paint used in the 19th century is not comparable with today's paint.

Not to mention, she clearly is not an artist!!!

That is just horrible.

Poppycock!
She was dead on.

Anyone from Spain knows that Jesus is always portrayed like this in any stage play. 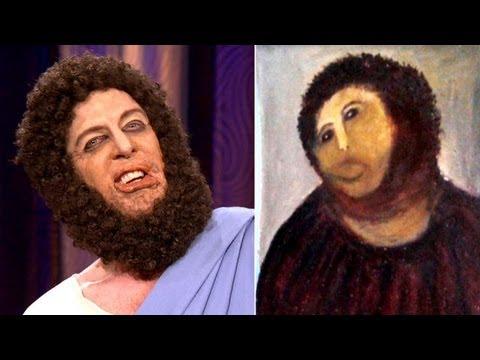 Thank goodness she fixed that fresco painting.
It was full of misinformation from the Catholic church.

posted on Nov, 25 2012 @ 01:59 AM
link
I remember reading about this when it first happened. From an art lovers view it is a shame. From a comedic view it is such a terrible painting! What was she thinking?? She woke up and was all "Yep, going to go paint a masterpiece today". Sheesh lol.

As to the topic of the search fail. Its kind of funny a fail post about a fail picture. Failception!

Originally posted by BlindBastards
I could do a better job and I’m utterly useless with the paint brush.

posted on Nov, 25 2012 @ 02:12 AM
link
I'm so glad you brought this to my attention.
I'll read the story after I've wound down from seeing the image.
You may be on to something with the conspiracy angle.
Yes we evolved from a pile of mutated goo at the bottom of the ocean.

posted on Nov, 25 2012 @ 02:49 AM
link
I have to admit I had to laugh when I saw the pictures. At first I thought it was a wind-up or something but maybe it isn't. Really, if the authorities wanted it preserved so badly, why did they not have it either cordoned off or coated in a clear preserving/weather proofing coating so it would not deteriorate any further.

I laughed till I cried, between comments about it looking like he is holding a Swiss role to likening it to the Mr.Bean movie where he had a similar painting cock-up.

Let's face it, in the grand scheme of things, it's just a small painting of Christ, one of many paintings of Christ. With people being murdered, abducted, rogue governments, mass culling of the human and other species by the few at the top, huge paedophile rings that reach to the top of the ruling classes, losing one small fresco really isn't that big a deal.

posted on Nov, 25 2012 @ 08:48 AM
link
FTR here is the earlier thread.
ATS does allow for topics to be reposted after a length of time, usually more than a month.
The original was posted months ago.
www.abovetopsecret.com...

Personally I never understood restoring art work. I always thought it was more valuable and beautiful the way it was. Flaws give it character and show history, why change that.

I feel the same way about people who paint wood and redo antique/vintage furniture. I could cry over some of the beautiful 19th century pieces I've found on a certain site that have been "restored" and they look NOTHING like the original. One was actually painted WHITE. I gasped in horror!

I like antiques esp wood furniture. I prefer to have the pieces left just the way they are. I like the marks that have been left from over the years. Gives it character and history. I feel the same way about old homes. I do think if you restore an old home you should keep it to the original style. I lived in a 100yr old house that was converted to apts. It had beautiful wood in the entry way which would have been the original hallway. The stairs were all wood as were the walls. Lots of beautiful wood trim and what did they do to all the wood?!?! They painted it WHITE!! That house needed a lot of work and I didn't realize til after living there. I wish the right people owned it and would restore it back to a home. It would be a beautiful house with the right owner to give it TLC.

Originally posted by Strictsum
Can I delete it or does a mod have to do it. I searched the title of the article only, guess I should have searched more.
edit on 25-11-2012 by Strictsum because: (no reason given)

I wouldn't worry about it. Many people post duplicate threads.


LOL the replies in that thread hurt my side from laughter!

At least I brought it to a few peoples attention who had never seen the story before.

At least I brought it to a few peoples attention who had never seen the story before.


Yea I hadn't seen this before so thanks for posting it again. I even shared it on my FB.

It is insane what this person did. Unless you are an actual artist and not just calling yourself one you should never touch art work and try to restore it. Restoring art work is a skill all in its own.


HAHA omg stop you are killing me. Between this one and the original thread my sides can't take anymore!

It's sad but the jokes are just too darn funny on this one.