posted on Mar, 24 2015 @ 01:36 AM
link
Testimony describing jets being scrambled to intercept the objects involved in the Cannon Air Force Base UFO Flap.

On Jan. 22,1976, the strange objects zipped around Cannon F-111s that were sent into the air to investigate them, according to testimony that appears on Vike=92s Web site. The objects darted out of the reach of the jets, cutting through the air at 90-degree angles, and racing at phenomenal speeds..


"When I finally drove out to the Base, I was shown through the gate by a sergeant, and walked into the office where the captain was waiting for me. I sat down and began to relate to him some of the things I had been doing about UFOs. The captain asked: 'Do you believe in UFOs?' I replied: 'Oh, by all means! I've seen enough.' The officer said: 'Well, we do too, but generally denied by the press and the government. We're told to do this because of public panic. We know they're there; we've been tracking them with radar for many years. But we don't know where they're from any more than you do. That's about all I can tell you, at this point in time.'"

"Then he said: 'It's too bad you're just a civilian!' I didn't know what he was getting at. The captain reached into his desk drawer and pulled out what looked like a 7 x 9 enlargement of a 35mm photograph. And he asked me: 'Do you know what these are?' I looked at the photo and said: 'Well, it looks like three discs!' I could see that they were silver in colour and they each had these small button parts in the centre. The captain said: 'Well, we had three jets that were coming in for a landing, from about 5 miles high at North Bay, a couple of weeks ago. And they reported down to the base that as they were coming in, there were three UFOs hovering over the North Bay base. So one of the pilots turned his gun camera on and took movies. And this photo is one of the best shots taken from a long string of frames.'" 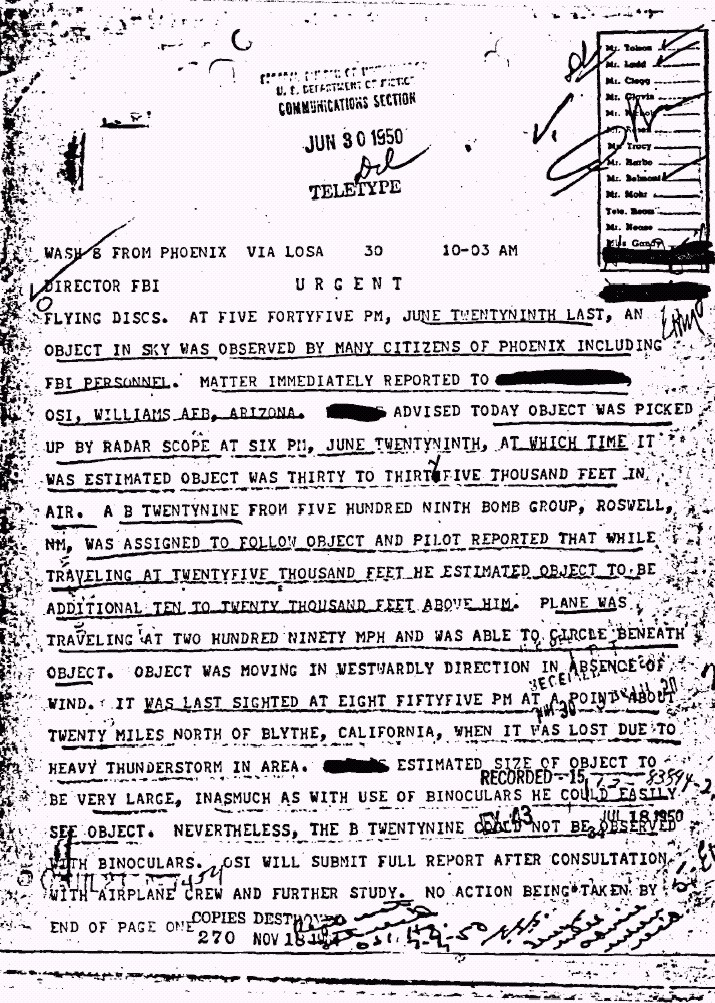 This incident always impressed me, and apparently it impressed a lot of others, too. For the die-hard skeptics at Project Blue Book this was the one they had always asked for. Here was a good UFO sighting. ‘This was an unknown, one of the best,’ a ground witnessed visual, with a ground radar tracking, and the pursuit of the object by a jet interceptor that also locked on with its radar, with all the maneuvers independently verified. The UFO was playing a cat & mouse game with an F-84 ‘Thunderjet,’  the first USAF jet fighter able to carry a tactical atomic weapon. Major Lawrence Tacker not only confirmed this case, but he wrote one NICAP member and told him the Air Force had gun-camera photos of the object and radarscope photos.

Best video library in the world, those 'in the know' about UFO's must have vaults full of it, I would pay the admission

The large number of "30 foot diameter" "UFOs" just "kill me". And some are even smaller.

To allow living space, life support and engines, the little fellers might be 1 inch tall.
I don't know how the little fellers have the courage to come to the "planet of the giants".
They could easily be accidentally swallowed by a small dog.

The "original Star Trek Enterprise" was about a kilometer long".

Really makes one doubt that they are structured craft.

But the fact that the footage is missing makes one wonder what kind
of crazy conspiracy is happening INTERNAL to the world's militaries.
But people are people though, whether they are in the military, a letter
agency, or some other organization. I mean, look at Puharich. He was
part of a crazy occult conspiracy and he had free run of a lot of
very sensitive operations and was taken seriously by a number
of his peers and congress too.


The large number of "30 foot diameter" "UFOs" just "kill me". And some are even smaller.

To allow living space, life support and engines, the little fellers might be 1 inch tall.


Plenty of credible reports from credible individuals that need to be taken extremely seriously though mate - irrespective of any assumptions about size (allways been quite fond of this case).

The "original Star Trek Enterprise" was about a kilometer long".


Ha also put me in mind of this report (also radar confirmed) which looks a bit enterprisey - is that big enough for you?

Really makes one doubt that they are structured craft.


Well they certainly leave physical traces but god knows what they are - maybe everyone is as clueless as each other when it comes to speculation about nature and origin.

But the fact that the footage is missing makes one wonder what kind of crazy conspiracy is happening INTERNAL to the world's militaries.

Think they´ve got things locked down pretty good and certainly never thought there´d be this many examples of missing footage when I started the thread (especially considering they´ve never even released one frame).

Here´s another potential candidate from Luke Air Force base involving two military jets pursuing two UFOs (once again no footage ever released to the public) - see 10:05.

If you know of any other cases involving missing gun camera UFO footage (or anything else about the subject in general) then please post it.

Well the one and only sighting that I've ever had certainly appeared large..but I had no way to ascertain distance or actual size.

As you've no doubt read about my sighting, the one I saw changed form 3 times...and one of the forms WAS from Star Trek TNG.

The phenomenon was royally messing with me.

This is just one personal reason that I hold perceived forms and apparent sizes of such phenomenon to be rather ridiculous.

If one cannot trust even basic perceptual data, then the whole business gets stood on its head.

Good photos pretty much don't exist, and if we got one, it would (it seems) be some form of Deception that could not be trusted.

This said..."good photos and radar traces" "go missing". But I believe that is to promote the artificial modern mythos of structured craft.

All the evidence points to that...or So it seems to me anyway.

We are left with too many questions for comfort.

I'd gladly post photos if I had them...but even if they were perfectly taken, on the white house lawn next to Obama on live TV...they would be at least a perceptual deception.

I can't prove what is "real" "behind the deception".

But coming to realize there is quite possibly universal deception involved...that strongly moves the investigation more towards psychology than photography IMHO.


The Case at NICAP

posted on Sep, 12 2019 @ 12:49 PM
link
I patched this together a while back from what I seem to recall was the Project Blue Book image file. My poor memory at work again.


"According to Richard Hall, a former Bluebook chief (Robert Friend?) told him that during the late 1950's and early 1960's gun camera films of UFOS were being 'routinely' obtained during jet interceptor chases and sent to the CIA's 'National Photographic Interpretation Centre (NPIC) for analysis. The individual also stated that 'none of the analysis data in these cases has been released, nor has the existence of these films ever been acknowledged'..

posted on Mar, 23 2021 @ 09:51 AM
link
A strange close range pilot encounter being described below - unfortunately he didn't have time to get the gun sight up to take photographs.

Jolly good show...Jus goes to show why fruit orchards are an excellent attractant for foo fighters.

Hola mate, there's a new vid been released here about foo fighters in case you hadn't seen it.

"According to Richard Hall, a former Bluebook chief (Robert Friend?) told him that during the late 1950's and early 1960's gun camera films of UFOS were being 'routinely' obtained during jet interceptor chases and sent to the CIA's 'National Photographic Interpretation Centre (NPIC) for analysis. The individual also stated that 'none of the analysis data in these cases has been released, nor has the existence of these films ever been acknowledged"'..

Following on from the claims made above about the CIA's National Photographic Interpretation Centre there's also an interesting snippet below from Nick Redfern concerning the UK's 'Central Office of Information' (COI).

Robin Cole is someone who spent a lot of time investigating the UFO phenomenon in the mid-to-late 1990s. In 1998, I interviewed Cole about his research. Most of it revolved around the UFO connection to the U.K.’s Government Communications Headquarters, GCHQ, which is based in Cheltenham, England and that is the U.K.’s equivalent of the United States’ National Security Agency. Cole said to me: “I gave a presentation for a small group of people here in Cheltenham in early 1997, and at the end of it this guy came up to me and said: ‘I was very interested to hear what you had to say about the Civil Service.’ He continued that in 1958 he worked at a London address just off Waterloo called Hercules House in the Central Office of Information (COI). Basically, his job was to ferry messages back and forth to various departments; and on one occasion he was allowed to enter the vaults. Well, when he was down there, he noticed that there was a whole shelf of gun-camera footage and other film footage just labelled “UFOs.” He’s now retired but he made it clear that he’s still under the Official Secrets Act.”

Although Hercules House is no longer a government building, maybe, somewhere, that footage still exists. Perhaps, in an old vault, just waiting to be found.