It services New York, New Jersey, and Pennsylvania. Guess what states are getting pounded with the Hurricane Sandra (lol) Superstorm? Us three.

Well this morning, in the a.m., a transformer blew-up. Meaning? No power. The largest distribution center in the Continental United States cannot bring their customers product. Who are their customers?

Where does everyone go before/during/after a storm to get products? Well, now you see it.

The Walmart in Dickson City, PA is literally completely empty of milk, bread, and eggs. When I mean literally, I mean to the fullest extent of the word.

How empty you ask? Try this for the bottled water isle: 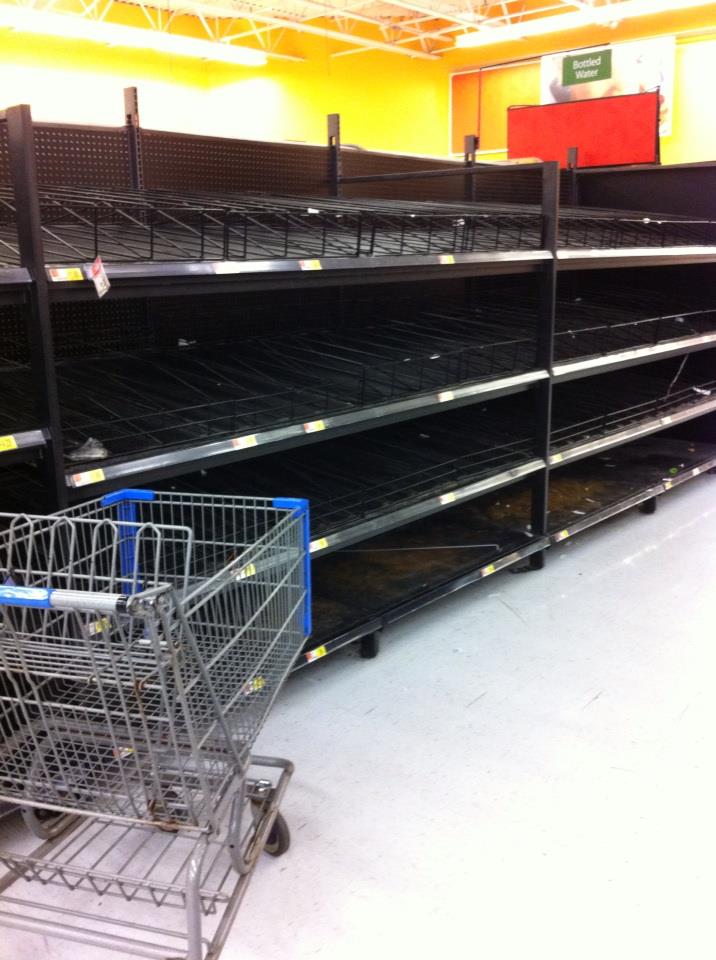 He took that picture last night. There were managers standing by the empty milk, bread, and eggs isles waiting for people to get there so they could tell people that there was nothing that they could do and there is nothing left.


There won't be anything left either, because I won't be able to load it onto the trailers.


Disaster already? Good thing I have a freezer full to the brim with deer meat and a wood burning stove.
Gotta love the country.

posted on Oct, 29 2012 @ 07:33 AM
link
Wow, thanks for the update. I am sure some people will be able to use this information to save them some time and giving them a heads up.

I partially blame the media for this.

I was watching CNN coverage this morning and the number of times the hosts/in-field reporters said things like "Destruction", "Damage", Epic proportions and many other fear mongering terms, was absolutely staggering.

They have created a frenzy before the storm has even landed.

Why not perhaps focus on efforts to ensure public safety instead of keeping the camera trained on a boob of a reporter and a dark sky...


Thank you for the Information!!! S&F OP!..My mother works in a shipping Dept that deals with Walmart.They received a call early this morning from Walmart trying to double their order! It can't be done, but this is a Sign that Walmart is OUT of supplies on the East coast! If not out they soon will be. People need to WAKE UP and Prepare!!!('')('')('')

Nothing crazy here yet. But I am very hung-over, I don't know why I am awake.

There were some places flooding yesterday before it even started raining.


LOL! Take two tylenol and go back to bed maybe you will just sleep through frankenstorm

It's not going to be this giant storm they've described. They have all these people that don't know what they're talking about pumping you guys with misinformation.

I'll keep you guys posted from someone actually inside the storm...unless my wifi goes off -_-


Yeah, it simply cannot be done. Doubling supplies means doubling work. That would mean upwards of 16 hour nights. Then we'd have to drive home in the storm and come back shortly thereafter.

I'll be back later though, weather permitting.

posted on Oct, 29 2012 @ 07:50 AM
link
If you are a "waiter" for some subjective trigger to begin to prep, you've decided to factor in luck as to whether you survive or not. Any time luck is a major component of your strategy for success, it typically does not happen.

I've lived and learned otherwise. No one's laughing at my stocks now.

Looks pretty good so far in most places.. a little flooding in some areas, but is expected to get worse later today according to msm.
Stay safe

posted on Oct, 29 2012 @ 08:16 AM
link
Anything going out today wouldn't hit the shelves today. I've hauled freight for Walmart many times. We pick up at the original DC, then take it to a Walmart DC, where they store it until the stores order it. They usually have a pretty good stock of things at the DC, but they can also ship between one DC and another pretty easily. There is usually one or two trucking companies that have a dispatch center and group of trucks on site that are dedicated to that DC.

Looks pretty good so far in most places.. a little flooding in some areas, but is expected to get worse later today according to msm.
Stay safe

Originally posted by tkwasny
If you are a "waiter" for some subjective trigger to begin to prep, you've decided to factor in luck as to whether you survive or not. Any time luck is a major component of your strategy for success, it typically does not happen.

I've lived and learned otherwise. No one's laughing at my stocks now.

I despise "waiters". I just call them "Average Americans". Haha.

As I said, I live in the country. A rural area. We hunt a lot during hunting season, and most of our tags are full. I'm surrounded by farms and most of the farm owners are our best friends. I have a wood burning stove and a well.

My water is pure. My food is fully stocked. I have plenty of heat, light, shelter, and food.

Far from a waiter.

I've gone 7 days with no power, just for fun in the summer. It used to be called "living", back in the day; but we just call it camping now. haha


I'll check in here and there, but the majority of my updating will be from 1pm to 5pm; that is when most of the storm will be in N.e.p.a.


You're right. I'm talking about how since I'm not there today, the freight won't be there tomorrow or Wednesday and when I go back to work tomorrow, I'll be killing myself trying to get double the work done.

posted on Oct, 29 2012 @ 09:06 AM
link
Thats a hell of a coincidence that the transformer would blow before any major power problems have been reported in that area. Late tonight is when all the power is supposed to go. Hopefully , Sandy is the only thing we will have to contend with.


I thought that it was weird too, because it STILL isn't even raining yet.

posted on Oct, 29 2012 @ 09:58 AM
link
No but there is more draw on the grid. Things that are normally shut off are on and drawing power while people prepare for the storm. The EMA is firing up their management centers, etc.

PP&L called all of it's customer's and told them to expect outages up to a week.

A man fell asleep while driving and drove into the transformer. Guess what? It might be out for 3 days. Which means, Walmart's in three states won't have supplies. Target's and K-marts aren't excluded from that.

The work I did on Friday, they didn't even ship that for fear of the trailers getting stuck. So some NJ Walmart's haven't had supplies since Thursday.

On a side note, I have a weird coincidence for you.

At my girlfriends mom job, a man fell asleep while driving and hit their transformer as well. Gentex corporation. Strangely enough, Gentex manufactures military helmets, lenses, backpacks, and other clothes. So the military will be without clothes and Walmart without food.