posted on Oct, 29 2012 @ 12:37 AM
link
The 7.7 Earthquake which hit the coast of British Columbia on Saturday night occurred in the same region where the worlds largest Geoengineering experiment took place a few months ago.

In July 2012 a private businessman named Russ George, or as the Vancouver Sun has dubbed him the “rogue climate hacker” dumped over 100 tonnes of iron into the pacific ocean, just off the coast of British Columbia (Haida Gwaii) in the largest ever geoengineering experiment.

Could this be simply be a coincidence? Well as many in the alternative media have realized. Coincidences in situations like this are very, very rare...

Lucky if we don't get another...


Did you check to see if this sensationalist claim was actually true?

And USGS has the location of the earthquake.

Simple to check if you try, see it on a map, and the claim is debunked. 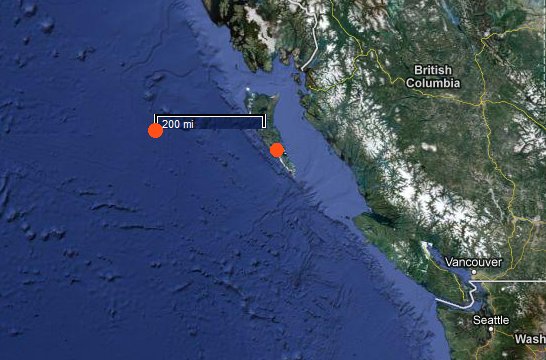 Edit - actually the claim is worse, because nautical miles are a bit different, so the iron dump is another 30 miles further out to sea than shown above.

posted on Oct, 29 2012 @ 01:04 AM
link
100 tonnes of Iron? Big deal. ONE cubic meter of iron weighs over 7,800 kilos all by itself. That's nearly 4 tonnes on its own. So a decent sized ship that sinks weighs more than this Geo-engineering project put into the water. I doubt that could cause an earthquake. And if you read the poorly written article in the link, it mentions "artificial plankton". Huh? Where did that come from? He might intend for an artificially induced extra feed source for the existing plankton, but the writer of this article mentions artificial plankton. It's a poorly written short article of no consequence. So basically..... even 100 tonnes of iron powder is a fairly small amount in volume.

posted on Oct, 29 2012 @ 01:14 AM
link
where are we going with this? are you saying the iron dumping was a cover for more sinister operations in the area ?

posted on Oct, 29 2012 @ 01:16 AM
link
The Air Force's Tethered Satellites which take highly charged particles from the radiation belts and dump the energy into the atmosphere.

That caused the earthquake. People in the region where the energy was dumped noticed their geiger counters pinging like crazy. The rainfall it caused was radioactive.

The energy those satellites released over the Pacific caused the earthquake. Not this mans little silly experiment. He's just the PsyOp cover story.


I should have looked further into the story before posting.
Thanks for the speedy debunk!


So you are saying that the iron dumped into the ocean off BC's west coast caused this earthquake?


I wonder if the mass quantity of iron present within the water helps with using HAARP or other such devices. Mass amounts of suspended iron. Even if its in plankton now.

What would be the point of this experiment anyway ?

this is from one of the links in OP

100 tons of iron…. so basically, the equivalent of a ship sinking. A large cargo ship can have a deadweight of over 200,000 tons all by itself. And what are “artificial plankton”? 100 tons of iron is just not that much. Just ONE cubic meter of iron weighs nearly 8000 kilos!

posted on Oct, 29 2012 @ 03:36 AM
link
Take into consideration all the big earthquakes that occured the last 10 years around the world. The majority of them had a very small depth in comparison with the common earthquakes. Also, usually before these earthquakes the areas these earthquakes happened were suffering for a long period of unusual warm weather. For example, see what happened in Iran. They had almost two months without any rain! Also, you may want to see the example of Indonesia(2004) or the example of Japan where the depth of the earthquake was also 10km.

The Worlds Largest Geoengineering Experiment wasn't happening in the middle of the summer. So what could create this unexplained "good" weather and the earthquake? The answer is HAARP. It warms the atmosphere and accumulate energy in the upper levels of the earths surface. When this energy is enough the earth 's surface starts shaking and as a result it creates the disasters we see.

Try and follow the path of HAARP 's actions and you may predict the future. With this theory of mine i was able to predict the earthquake in Iran, not the exact time but the fact that it will happen.

posted on Oct, 29 2012 @ 04:13 AM
link
Dumping 100 tonnes of iron caused an earthquake? How many earthquakes did the Battle of the Atlantic trigger during WW2?

Yet another idiotic theory that even the description 'half arsed' suggests more thought than was actually used in the OP.

If one is going to have a conspiracy theory, at least *try* to demonstrate some sort of cause and effect.
edit on 29-10-2012 by waynos because: (no reason given)


Earthquakes aren't caused by weather, they are geological events. You can predict an earthquake anywhere in the word and be right if the timing doesn't matter


You say that like it makes a difference. You had a lucky guess, that's all, and I'm taking your word for it by the way. If your system works do it again, publicly on this board. If you are right I will believe you.

I'm not pretending to have a system or that HAARP has anything to do with it. Its the fact that you don't see why your claim is funny that's the real point here. You are just another mug that ascribes HAARP with powers it doesn't have, until you show otherwise.

How many earthquakes have historically occured in or around this area?

Maybe the iron was used as some sort of conduction point, directing some
form of energy input (from above?) into the desired area.

Wasn't the epicenter uncharacteristically located very close to the surface?

Isn't this area known for constant and extreme chemtrailing? I believe
i read that somewhere recently.

Remember ALL information is controlled and can be easily distorted, in these dark times we live in.

Originally posted by tj1980h
reply to post by jaxnmarko
The term "artificial plankton" has been thrown around a lot... Here is just one example www.cbc.ca...