Brains: It's what's for dinner [BMHWC]

“It’s been a terrible day at work. I didn’t make it more than a hundred yards this morning before some human kid shot me in the ear. He would have killed me (again) if I didn’t turn to look at the sound of him chambering his gun,” he replied back to his once beautiful wife. “I caught him though. He looked really surprised when I bit his face, and then walked away. I don’t think he realized that his brain was too small to make much of a meal, so I was just letting him go. He’ll be one of us by morning.”

She was not happy. “I’m HUNGRY! I don’t care if his brain was small or not! I need to eat, and I can’t go out without legs. You know how much it hurts me trying to drag my body around and get my guts caught on everything.”

“Don’t worry baby. I followed him back to his house. When the kid’s parents were busy trying to help him, I was able to take them both. We’ll each have a brain for dinner tonight.” He felt proud to still be able to provide for his family. “Did you already set the table?”

A laugh thick with bodily fluids arose from the woman. “That’s funny. Just give me the damn food.”

After a delicious meal of cold brains, the two relaxed in front of a blank television set, their own brains remembering a time when the power still worked.

With a look of love in her bloodshot eyes, she turned to her husband and asked, “So, what’s for dessert?”

A smile formed on his face revealing his blood-stained teeth. “It’s not ice cream,” he said. “I found the older sister of the kid that shot me hiding under her bed.” 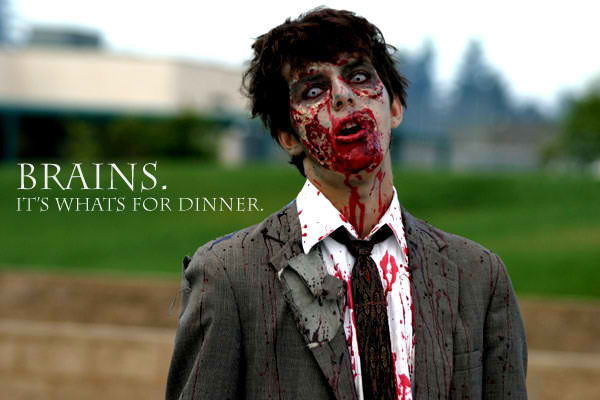 
Thanks for taking the time to read my story.


I love combining humor with a little bit of darkness...it reminds me of the writings of His Fluffiness.