Bosnian Pyramid of the Sun carbon dated to 25,000 years old. 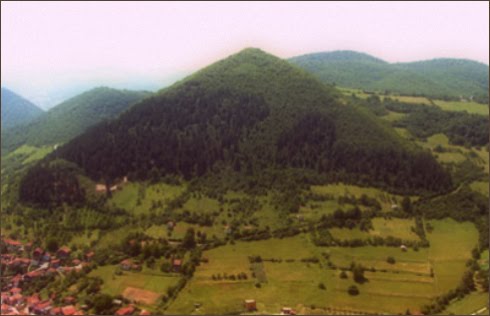 Italian archaeologists Dr. Ricarrdo Brett and Niccolo Bisconti discovered an organic material sample (a leaf) on the top of the concrete blocks that cover Bosnian Pyramid of the Sun in June 2012. Carbon dating was performed in Lab in Kiev, Ukraine with astonishing result: 24.800 years +/- 200 years. This carbon dating puts the pyramid 20 thousand years before the Sumerian and Babylonian “civilizations. In other words, the Bosnian Pyramid of the Sun dates back to a time when organized human civilizations were not supposed to exist. 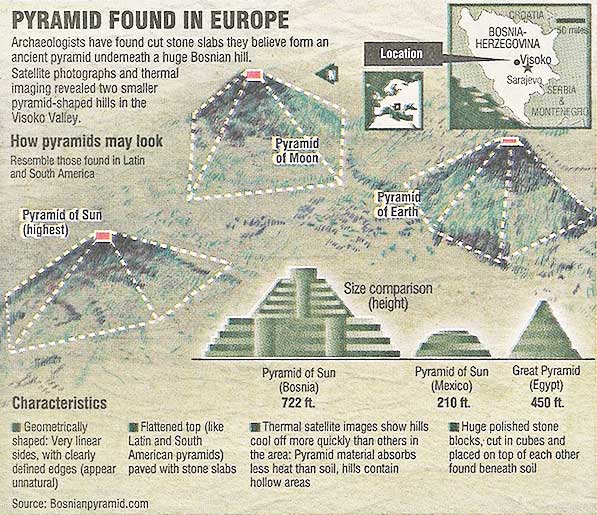 Why this is not more extensively covered by the MSM is not surprising, after all, it flies in the face of modern academia with regards to what we are taught about our ancient past.

It is sites such as the Visoko Valley in Bosnia which includes the Bosnian Pyramid of the Sun that would have them needing to re-evaluate everything that the text books would have you believe to be factual about Earths past civilisations.

The pyramid has all the elements: four perfectly shaped slopes pointing toward the cardinal points, a flat top and an entrance complex. On top of the pyramid are also the ruins of a Medieval walled town, once the base of a Bosnian king Tvrtko of Kotromanic (1338-1391)

This latest finding from this amazing structure appears to verify that there is enough evidence to conclude that the pyramid pre-dates the Sumerian civilisation by some 20,000 years.

So, if this is indeed the case, then we do seem to be at a point in history where books will need to be thrown in the fire so that our actual history can be recorded more accurately to reflect what has been discovered both at this site, as well as sites such as The Pyramid of the Sun in Teotihuacan, Mexico (the Bosnian pyramid was given her name “pyramid of the sun” due to her similarities to Teotihuacan).

Once again, archaeological findings in recent times have given us food for thought as to how long we have actually been living on this planet.


WOW, what a discovery! I wander if they will be excavating the pyramid, or will simply use sonar and radar on it. Personally I would like to see whats under all that dirt with my own eyes.

posted on Oct, 14 2012 @ 11:10 AM
link
So this has been proven to be a pyramid? The last I heard it was only speculation that it was while a lot of people wrote the idea off as fantasy. Have they actually found an entrance to it or is it still an assumption?


It's still a hill. Osmanagic hasn't finsihed building the 'pyramid' yet

posted on Oct, 14 2012 @ 11:17 AM
link
How do they carbon date the stone to figure when they were assembled into pyramid formation? carbon from the fragments of the tools used to cut the stone? how are they not dating the carbon from when the stone was formed?

posted on Oct, 14 2012 @ 11:39 AM
link
This is the best thing I've read all week. Thanks for the update on this amazing structure. I have been fairly convinced for awhile that there most likely was an advanced civilization in our distant past. Either we just don't know or it is being supressed.

posted on Oct, 14 2012 @ 11:53 AM
link
Hmmm... they haven't quite dated the pyramid to that time have they? They have just dated something that was on top of the pyramid. That something might have found its way there after the pyramid was built.


Acknowledged - I'm sure that the debates on this finding, in the archaeological realms , will be very interesting in the coming weeks and months.

This is a hill. Here are the sides laid out against true north: 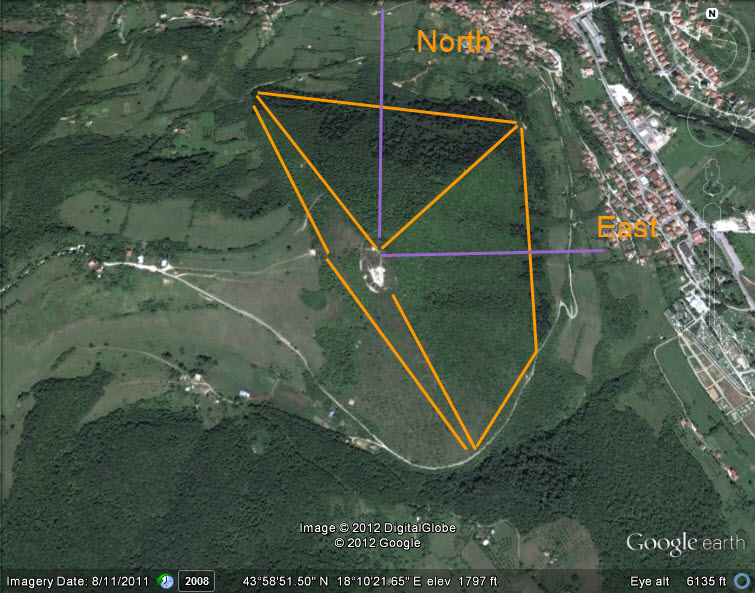 Here is a view from ground level, from the southeast: 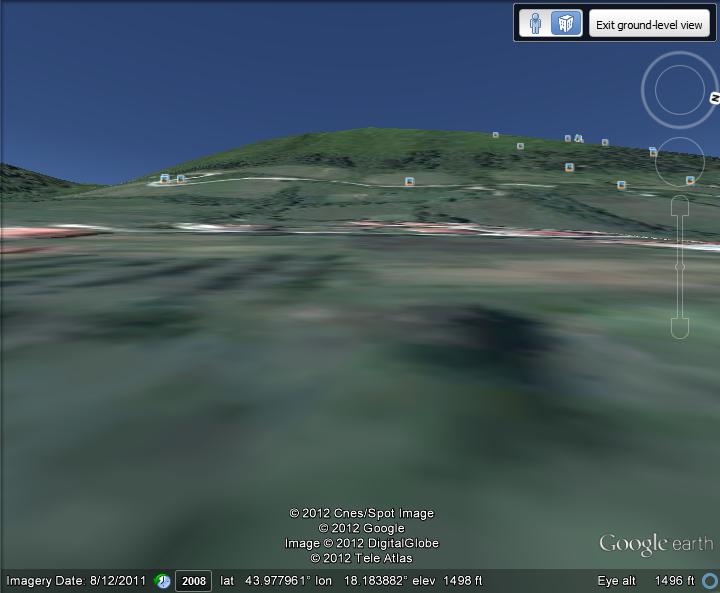 There is nothing vaguely pyramid about this hill. No orientation, nada. It's a hill that possibly some neolithic culture build on...maybe.

posted on Oct, 14 2012 @ 02:07 PM
link
You can't put an enormous amount of faith in these results when "Dr. Brett" isn't actually a Dr and in fact has only a bachelors degree. While true that in Italy this gives him the right to call himself Dr. It's still terribly misleading as from what I can dig up his area of "expertise" is the birth of Hebrew culture in Babylonian captivity. I would t co sided this even remote evidence of the alleged structure being 25,000 years old. I keep hoping for some legit work to be done at this site but as the years drag by and it's further contaminated by amateurs this reality becomes much diminished in my opinion.
edit on 14-10-2012 by peter vlar because: Spelling error

posted on Oct, 14 2012 @ 06:24 PM
link
Thats a way of looking at it...id say well get more truth out of the amateurs and more transparency than science has so far given us archaeologically......you can watch the work on you tube fer petes sake...Hawass wouldnt give you the time of day or the real story in egypt.....unless you payed him hansomely.

A sample was taken from a cave and sent to the UK - and Osmie didn't get the result he wanted, he actually got no result, it wasn't testably. Then somehow another sample - from places unknown - was sent to another lab.......


So other than more laughing at the fraud, no real 'discussion' will take place

The real question is why the OP put this up without researching it?

Originally posted by stirling
Thats a way of looking at it...id say well get more truth out of the amateurs and more transparency than science has so far given us archaeologically......you can watch the work on you tube fer petes sake...Hawass wouldnt give you the time of day or the real story in egypt.....unless you payed him hansomely.

You're less likely to get more truth from amateurs and more likely to get inconsistent results that are clouded by people who have no clue stomping over things that a trained archaeologist would understand the significance of.contrary to popular opinion most scientists aren't marred to dogma. They would much prefer to be the guy to break the mold and rewrite history.

How do they carbon date the stone to figure when they were assembled into pyramid formation? carbon from the fragments of the tools used to cut the stone? how are they not dating the carbon from when the stone was formed?

Maybe you should read what the OP posted. It was a leaf.


This is a amazing find and I am sure they will start digging.

i think its my cue:

carbon dating is a farce....it doesnt account for years with extreme weathering....so in its own maths, its wrong


In this case Pharaod you are partially correct. The date is probably right but the material has nothing to do with the date of the hill.

The hill was formed during the Miocene and the layers date from 15 to 7 millions years ago....

Where those hills come from

just like if i scraped some of that organic leaf matter and put it on a '74 buick , it wouldn't make that buick 25,000 years old.