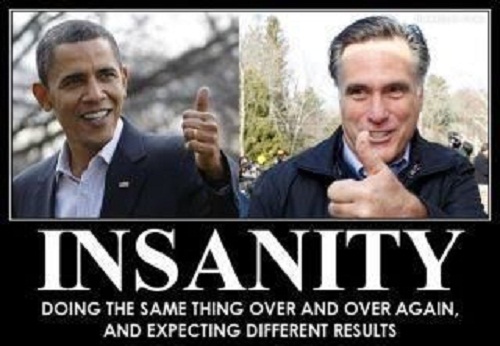 The fact of the matter is, as Gerald Celente said back in August, when confronted with the choice between two evils, you don’t vote for the lesser evil. You boycott the election and do not vote. “Lesser or greater, evil is evil.”

Both options are bad for America-

The only people who will benefit from the election of either Romney or Obama are those associated with the private oligarchies that rule America.

Both sides are serving the same interests and playing the same Orwellian game of lying to the people and then doing the opposite of what they promise, it goes back decades.

Don't vote for Obama because you think he is a lesser of two evils.

Don't vote for Romney because you think he is a lesser of two evils.

posted on Oct, 14 2012 @ 09:56 AM
link
We didn't pick them in the first place. The corporations lobbying behind these two candidates picked our choices for us. Most just go right along with it thinking they have a choice.

Both candidates are like two different hallways that lead to the same door.

It's okay, a dum dum lollipop doesn't know it's a sucker either.


I agree with what you say. Do you take the time, go vote for Paul or Johnson only to be ignored once more in the media, or do you save 4 dollars a gallon gas and say "Why bother?".
They have us exactly where they want us.

Just let evil stroll in like what happened in Iran 1979, when evil reigned holding Supreme power over the meek and fearful, even till now.

And just let forked tongued anti-USA haters tell americans what to do.

It dont count for anything anyways!

Never has never will!

We live in a totalitarian technocracy!

Anyone who thinks otherwise should take a glance out the window sometime!

Originally posted by andy06shake
Dont vote at all!!!

It dont count for anything anyways!

Never has never will!

We live in a totalitarian technocracy!

Anyone who thinks otherwise should take a glance out the window sometime!


Elections are simply giant public relations evnts, and the public dont vote on policies, rather than on 'which guy they like the most'. And while they talk about all their forefathers statements of liberty etc, they forget to mention that it was a load of hot air, because at the time they said it while slavery was a common practice, and big business and women werent allowed the vote.........

The US government and defense agencies estimate they have a 72 hour window to activate all procedures to ensure continuity of government as well as a lockdown of the general population as civilian unrest, riots and outbreaks of violence are anticipated.

A source in the Deutsche Bank claims that in 2008 our financial and monetary system completely collapsed and since that time the banking cartels have been “propping up the system” to make it appear as if everything was fine.

In reality our stock market and monetary systems are fake; meaning that there is nothing holding them in place except the illusion that they have stabilized since the Stock Market Crash nearly 5 years ago.
Im not going to waste my time...
GOD BLESS AMERICA


I'm not sure what you're referencing... Iran democratically elected Mosaddegh but he was going to give the oil companies back to the Iranian people, the US and Britain didn't like that so they organized and arranged a coup which got rid of the democratically elected leader and installed the Shah. He reigned with an iron fist, torturing and killing people for a long time. However he was sympathetic to US business. When Ayatollah Khomeini took power the Shah took refuge in the US... What a surprise! That obviously angered the Iranian people, and they demanded the Shah's return, the US refused to return him to face his crimes against the people of the nation, which led to many unfortunate events including the Iranian hostage situation.

You don't have to sympathize with the Iranians actions while they were angry, but it would behoove many of us to realize that without the US doing some really awful crap, those things would not have ever happened. It's called blowback.

Anyway, I've decided I'm voting Johnson/Gray. I will never choose evil. Hell, ill never choose a liar and both Obama and Romney are liars, let alone a million other awful things that disqualify them in my eyes for taking a position that SHOULD be honored and respected.
edit on 14-10-2012 by PatriotGames2 because: (no reason given)


People want WIFM's. There is no guarantee in any election, so really it's a quandry on a personal level.

Unless the two party system is deleted in the future, this country won't survive no matter who is at the helm,

You not voting for the lesser of two evils when what you have to pick from is just pure evil. People need to wake up and realize this, until then, it's like pissing in the wind, and praying your spray doesn't come back on ya.