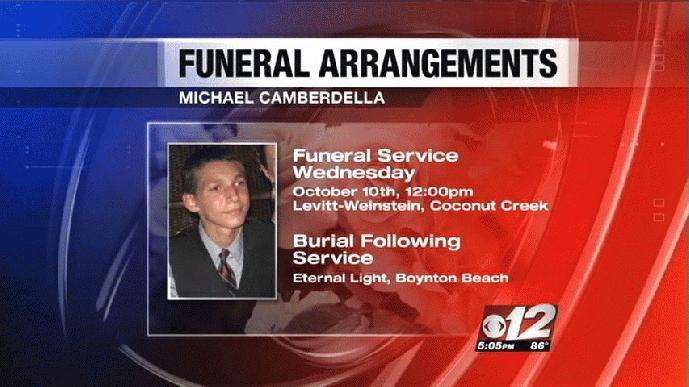 We can end the discussion over whether or not garden shears and a rubber mallet constitute a force deadly enough to inspire an officer to kill. This man was apparently and according to multiple witnesses unarmed even with the garden tools. The boys mother made this claim all along but the deputy himself disputed it. Since the mother was hospitalized for trauma she was not taken seriously in the beginning until now as another witness comes forward. The very sad part of this mess is the boy had recently switched medications and the medications themselves were making him act violent.

Because of the seizures, Teller said Camberdella began taking medication. But the medication changed him, made him violent, Teller said.


SUBURBAN BOYNTON BEACH, Fla. -- - The day Michael Camberdella, 18, was shot and killed by Palm Beach County Sheriff Deputy William Goldstein, a witness who lives in the neighborhood claims she did not see anything in Camberdella's hands when he was shot dead.

Speaking through her lawyer, Spencer Kuvin, the witness claims Camberdella should not have been shot dead from the scene she witnessed.

The witness told Kuvin she ran to Camberdella and saw a single bullet wound to his chest. When doing so, she noticed a rubber mallet and hedge shears, but said they were well out of reach, at least 20-feet away.

The Sheriffs Office maintains this man was armed with shears and a hammer, the young mans mother and uncle so far, as well as the witness above (speaking through her attorney) says he was not armed at all.

PALM BEACH COUNTY — — The family of an 18-year-old shot dead by a sheriff's deputy Thursday morning is blasting the deputy, saying he didn't need to fire at the teen. "My nephew died in cold blood," said Mark Teller, great-uncle of Michael Camberdella. "[Michael's mother] is in shock." The family contends that Camberdella was unarmed when the deputy shot him in the chest. Teller said the deputy fired six times.

The family of the 18-year-old man who was shot and killed by a Palm Beach County Sheriff's deputy on Thursday has hired a team of lawyers to investigate the case. Read more: www.wptv.com... wyers#ixzz29CA13Pgg

This is new and critical update to an earlier thread Mom calls 911 to manage autistic teen and cops kill him with a new witness coming forward and more information made available. So far the PBSO has refused to comment and an investigation is pending.