posted on Oct, 12 2012 @ 09:48 AM
link
An interesting geoplyph in the shape of an elk or deer has been discovered and the site partially excavated in Russia. This important part of the discover may be that it could predate other such geoglyphs such as the Nazca Lines in Peru. 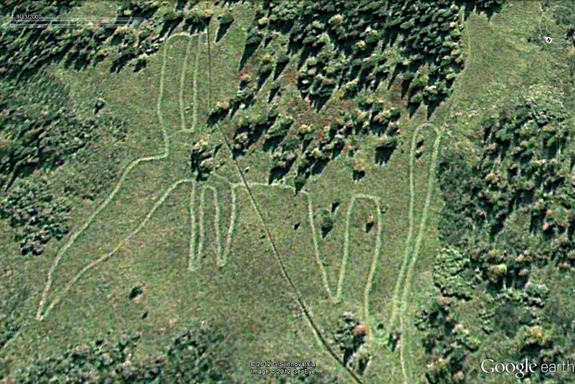 A huge geoglyph in the shape of an elk or deer discovered in Russia may predate Peru's famous Nazca Lines by thousands of years.

The animal-shaped stone structure, located near Lake Zjuratkul in the Ural Mountains, north of Kazakhstan, has an elongated muzzle, four legs and two antlers. A historical Google Earth satellite image from 2007 shows what may be a tail, but this is less clear in more recent imagery.

Excluding the possible tail, the animal stretches for about 900 feet (275 meters) at its farthest points (northwest to southeast), the researchers estimate, equivalent to two American football fields. The figure faces north and would have been visible from a nearby ridge.

Among the finds from the excavations are about 40 stone tools, made of quartzite, found on the structure's surface. Most of them are pickaxe-like tools called mattocks, useful for digging and chopping. "Perhaps they were used to extract clay," he writes in the email.

If that date is correct, it would make the geoglyph far older than Peru's Nazca Lines, the very earliest of which were created around 500 B.C. Grigorievadded that current studies of ancient pollen at the site will help to narrow down the age

It's still freakin awesome though, so thank you very much for posting it

I wonder what Erich von Daniken will have to say about this.


I wonder what Erich von Daniken will have to say about this.


Nothing that anyone should pay any attention to.
edit on 12-10-2012 by CrimsonMoon because: (no reason given)


True, but I figured since he never shuts up about the Nazca lines he would be all over this like flies on stink! I get a kick out of the so-called "experts" that really don't know anything but only speculate and expect the public to accept their speculations as fact. It's quite amusing!


Thank you! So I'm not crazy! Someone else took a look at that and went deer? Elk? That looks like an anteater. Personally I don't think it's even an animal. To me it just looks like a bunch of lobe like rock piles.

I wonder what Erich von Daniken will have to say about this.

If there were aliens involved in this, that might explain why it has so little resemblance to any animals on Earth!

Originally posted by TheSparrowSings
It doesn't look much like a geoglyph to me. Maybe early road/pathway markings... Cool, still, thanks for sharing.

Oh I dunno, it's trying to depict something. (a pile of root vegetables possibly ) Maybe these were early prototype glyphs, and who ever made them didnt have a very good concept of how large drawings should be done. And it wasn't until the aliens came, gave a few folks an aerial view, and saw how hard they'd failed, that they learnt.

Originally posted by Acidtastic
Not sure where they got Elk or Deer from, looks quite badly "drawn" if it's animal. Almost like an anteater drawn by a todler.

It's still freakin awesome though, so thank you very much for posting it


I was trying to put my finger on what it looked like other than a deer or Elk...BINGO!

It is my belief those who did Nazca, understood some geometry and rudimentary surveying. I am not sure if a UFO was required. These guys with the elk? Not happening with the math too much yet it seems.

As another poster mentioned, there may be more in the area. Maybe this was the beta.


Looks more like a wall to keep farm animals and to try and keep away animals like foxes from that bush... If I were me Id put the bigger animals in the "Nose of the anteater and the smaller ones like chickens in the legs...

And my house in front...

Dont believe its anything geolythic,

posted on Oct, 12 2012 @ 10:18 PM
link
By the angle of the horns, my guess is ut is a reindeer of some type......
Very interesting, and it certainly could be a Nazca line type depiction......
Those who see no animal have got to work on their visualisation skills.....
This could easily be a primitive forerunner to nazca.......
Id be willing to bet that aireal surveys and ground radar may reveal others too......any takers?

The structure is a fort created to defend against attackers in battle.
The wall is probably about five feet tall which was on a hill.
The fighters would line up against the wall to defend against attackers coming from all sides except the side it is protecting which is probably a city of sorts.
The fighters killed would be replaced by fighters waiting inside.
A simple yet very effective defense against enemies.