The European Union has been awarded the Nobel Peace Prize for six decades of work in advancing peace in Europe.

The award comes as the EU faces the biggest financial crisis of its 54-year history, with many of its member states mired in recession.

Highly controversial, as this can mostly be seen as a victory for the elite in society, rather than the people. The EU has been nominated for several years, but it's peculiar it has won the prize in one of its most controversial eras of its existence.

According to Aftenposten, a norwegian newspaper, Agot Valle, a member of the Nobel committee and a strong opponent of the EU, has been on sick-leave for a year. Her substitute replacement, bishop Gunnar Staalsett, has clearly disregarded her views and interests on the matter of the EU, and provided the committee with a unanimous vote.

By many, this is regarded as a provocation, because for a lot of people, the EU is associated with social unrest, war and misery.

If the Nobel Peace Prize wasn't already a joke, it certainly has become one now. It's a farce.

posted on Oct, 12 2012 @ 04:59 AM
link
I actually think this is a good nomination, considering Europes bloody history. No war s for 60 years is a pretty good outcome I believe. Surely better than what we had before?

posted on Oct, 12 2012 @ 05:10 AM
link
Shouldn't it have gone to Germany? They have single handedly kept the EU from a full blown collapse


I hope that's a joke! The German's are always at the crutch of any problems in Europe i.e. the last two world wars etc.


First they gave one to Obama, now the European Union. They might as well give one to Hitler too....

Maybe it will work out better than with him. He wasn't exactly the wrong person for the job, but the obstacles from outside his office were just too high and unflexible.


yea they just head off to countries much futher away to kill people.

and i am sure everyone in greece is delighted today. they thought their country was in ruins but now they are part winners of the peace prize.

you do realise this is more distraction for the impending european collapse.

when they start pulling ridiculous publicity stunts like this you know we are in very serious trouble.


First they gave one to Obama, now the European Union. They might as well give one to Hitler too....


This is really, really stupid! You should be ashamed about your lack of knowledge about Hitler! Seriously!


Well thast true enough isnt it? Certainly in 1700's, 1800's and first half of the 1900's, European countries were continuously at war with each other.
But since the EU was formed.... nothing. Peace.

Having said that, the EU can be heavily criticised for various other reasons... but peace isnt one of them.

Originally posted by woodwardjnr
I actually think this is a good nomination, considering Europes bloody history. No war s for 60 years is a pretty good outcome I believe. Surely better than what we had before?

Totally agree. Plus, i love anything Churchill (unrepentant!) and the EU (ish) was a Churchill idea (ish). Just thought though, purely for my amusement (yes, the EU should bend to me!), Merkel should be presented with it. On the Parthenon!


You should be ashamed at your lack of knowledge of Obama and the European Union. Please explain why the death of almost 2 million Iraqi and Afghan people and the illegal occupation of their lands is worse than the atrocities carried out by Hitler.

posted on Oct, 12 2012 @ 05:34 AM
link
The EU movement is now questioned and arguably under assault from new arising ideologies across Europe. This was a desperate attempt to hush the trouble makers up.

posted on Oct, 12 2012 @ 05:36 AM
link
It's an absolute joke, I can't wait for Nigel Farages speech on this matter! I'm not a huge fan on his but when he can't half put them European bureaucrats in their places. Hurry up Nigel!!

Originally posted by ManFromEurope
I guess it is meant as an act of support, of "keep doing and please don't fall apart!".

If this truly is the committees intent, that the EU is receiving the prize as a motivational factor, as with Obama, they're naive.

The existence of the NPP itself should act as a motivational factor for everyone to keep doing good, maybe it served this purpose many years ago, not anymore. Is there really any prestige left in receiving the prize? I don't think so.

Reasons for being awarded the NPP should stem from success or achievements in peace keeping endeavors, and in this respect, Obama in 2009 was a joke, as with the EU in 2012.


I'm referring to the continent of Europe and its bloody history, that through the EU, trade and cooperation have replaced wars that slaughtered millions. A much better position I believe. Is it not possible to take sme good things away from the EU? Or is it all bad?

posted on Oct, 12 2012 @ 11:28 AM
link
So its OK to give the EU a peace prize because of there unity in Europe yet the very same countries have been attacking and destroying other nations around the world? Far from worthy of a Nobel Peace Prize.

posted on Oct, 12 2012 @ 02:05 PM
link
If the prestigious and highest humankind acheivement awards - the Nobel Prize, had been awarded to EU for economics, it would have been GREATEST FARCE of all centuries.

BUT IT HAD NOT. It had been awarded for PEACE.

And it had been a long time comming.

Prior to WW2, Europe had been racked with warfare for centuries, by selfish rulers and magnets whom had kept their citizens as serfs and fed them with BS like they were mushrooms.

But when WW2 loomed, our forefathers, from the rich to the poor UNITED as ONE, throwing aside EVERY differences - cultural, religious, ethnicity, etc, to fight for survival, and VERY OFTEN, not for themselves, for they knew bullets and bombs have no name, death is imminent ANYTIME. Yet they courageously face battles, but only for the innocent next generations - US - to live free.

USA, despite its wealth, people and resources, could not have done it alone to save the world. It needed the help of Europeans - France, UK, Poland, etc, to complement the war effort on TWO fronts - Germany and Japan. Mussolini was only a farce.

AND who could forget the brave and courageous resistance fighters of France, Poland, Italy, China, Philippines, etc?

WIth USA leadership and resources, the world was held back from amargeddon. EU played equally a vital role with its intelligence, civilised ways and astounding courage. They all were our forefathers, who gave us our todays.

Even now, EU and Eurozone states had been a civilising and human right supporting force around the world, through our fathers, mothers, sisters, brothers, relatives and friends serving mankind around the world with aid in money, pumping investments or in support of UN efforts.

The Nobel Peace Prize was not just awarded to EU as an entity, BUT to EVERY individual european, INCLUDING even eurozone members today. May all Europeans hold their head high, and always to remember the sacrifices of their forefathers, and to continue the unity for the sake of civilised progress and evolution of the innocent next generations, not only in EU, but our world.

No nation or entity is perfect. Economic cycles have its ups and downs. It is only money. Mistakes will be made, for we are all flawed anyway, but within a civilised democratic system, such errors will be acknowledged one way or another. Money lost can always be made back when errors are corrected over time.

May all europeans know that fact, as they celebrate or denigrate stupidly the award given, and remember the sacrifices of our forefathers whom discarded every differences in life to be united to acheive a common goal, a goal that led to us this generation being free, and responsible for the freedom of the next generations...

Unfortunately, it had been PERVATED by the selfish, rich, indolent and greedy, and saw the widespread poverty and enslavement of mankind in the hands of the few.

European Union - a unity of an ethnic group long civilised without borders to SHARE all resources for peace and prosperity - had been the dream and ideal of EVERY european.

Unfortunately, it had been equally pervated as Globalisation by the greedy and saw mankind abused by those few. Fortunately, with this award, may more europeans comprehend and realize the pratical idealism of our forefathers, despite the woes of today.

Tough times and deceptions never last, only tough humans and truths do. 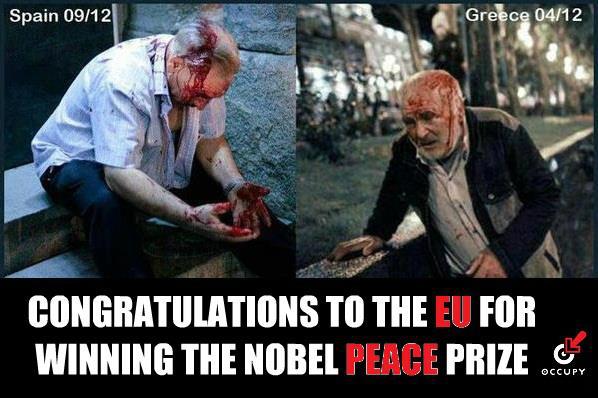