The men with Lavender Eyes and the Pink Cadillac

The men with Lavender Eyes and the Pink Cadillac

An incredible story of a 1963 encounter between a young 14 year old and men with lavender eyes and diamond shaped pupils who drove a pink Cadillac with no internal combustion engine......

posted on Oct, 11 2012 @ 04:46 PM
link
When I was 14, my best friend used to tell everyone that his dad worked for the CIA and that he had been to Area 51 many times. In reality, his dad was a racist, out of work plumber that drank too much. Needless to say, kids would repeat this around school and some fools actually believed it without the need of any proof.

My point? This is a story coming from a 14 year old without any proof.

posted on Oct, 11 2012 @ 07:21 PM
link
Starred and flagged. Its a really interesting story, really enjoyed it. And its not the kind of thing most people make up, has an authentic feel. In any case, I'd much rather err on the side of believing it, just like you would a friend sharing something odd, or family, because its the kind of thing that does happen, and you do have someone tell you, who you trust, who finds it unusual and has thought deeply on it all their lives.

i don't know who Sophia is (his wife? daughter?) but, its often or even always, generational. Not to mention they saw the lights frequently.

A diamond planet twice as big as earth in the cancer constellation!

And did you know candle light contains millions of nano diamonds.

Our pineal has crystal conductors too.

posted on Oct, 11 2012 @ 08:23 PM
link
Interesting. I have an interest in MIB phenomena. Which if true, is what I think he met.
I've read John Keel's and the newspaper lady from Point Pleasant's accounts as well as others.

It sort of rang true that they would have been interested in coming back because he mentioned one of the known names of GOD, Jehovah. I'm sure he/they weren't expecting that!

There is a school of thought that MIB are not ET but like to pretend to be and go out of their way using disinfo to make you believe in extraterrestrials while vehemently denying them in textbook disinfo tactics.

Most are described as wearing sunglasses that cover their eyes so the idea of them being an unusual color or shape is not surprising. I currently think of them as animated corpses. Not to be confused with zombies!
Just that they are disembodied spirits which enter and animate the recently dead. Hence the manner of dress.
Also the vehicles are those they see in funerals, most often black caddies and other sedans. This one being pink is a bit off the path, though.

The complexion is determined by the the state of embalming that was done to the selected corpse used.
In some of the other testimonials they sometimes chase down bloodmobiles and/or steal blood.
This seems to be part of the process of reanimating the corpse. The lifeforce is in the blood.
They are only able to 'reanimate' as I have described not actually bring the person back to life.
These spirits are not GOOD. They are bad and have an agenda which is contrary to GOD's will.
In my opinion.

posted on Oct, 11 2012 @ 11:56 PM
link
Sounds like he found the neutrinos from dimension x! I wonder if he ever found the ninja turtles to help him out and explain it. 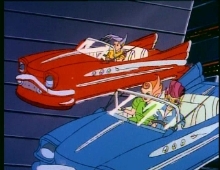 
The men with Lavender Eyes and the Pink Cadillac

An incredible story of a 1963 encounter between a young 14 year old and men with lavender eyes and diamond shaped pupils who drove a pink Cadillac with no internal combustion engine......

Originally posted by PaperbackWriter
Interesting. I have an interest in MIB phenomena. Which if true, is what I think he met.
snip

A REVIEW OF MIBS (Men In Black): A HISTORY
www.ufocasebook.com...
"The origin of the Men in Black legend can be pin-pointed fairly exactly. Back in 1953 a man by the name of Albert K. Bender was running an organization called the International Flying Saucer Bureau (IFSB) and editing a little publication called "Space Review" that was dedicated to news of flying saucers."


I'll just politely disagree by saying that's like dismissing the whole UFO and their occupants phenomena by saying it turns out that it was all made up by some guy named Kenneth Arnold.