posted on Oct, 11 2012 @ 02:48 PM
link
The Gateway pundit has posted an interesting story about how the Obama camp referred to some bloggers who tried to insinuate that Romney may have cheated in the last debate as "tinfoil hatters". I'm sure they loved it when the president disses some of his biggest supporters in this way.

It looks like they may have borrowed a pic from our favorite website to accompany the story . 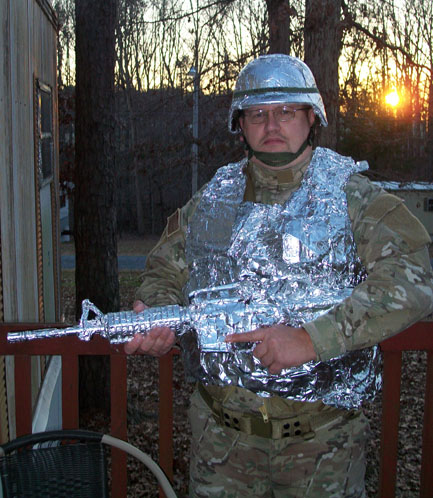 Finally, something we can all agree on…
Even the White House refers to top liberal bloggers as the “tinfoil hat” brigade
The Examiner reported, via Dan Riehl:

The Obama campaign referred to several major liberal bloggers as the “tinfoil hat crowd” in a statement to Fox News Wednesday. The campaign was responding to the cable channel’s request for a comment on an Internet conspiracy theory many of them had promoted.

Shortly after the presidential debate last week, a number of liberal bloggers including ones at Daily Kos, FireDogLake, Democratic Underground, and the Daily Beast’s Andrew Sullivan, among others, began posting items suggesting that Mitt Romney had cheated during the debate…

…Fox asked the Obama campaign for its reaction. Spokesman Ben LaBolt provided them with the following statement:

No — We’ve never casted our lot with the tinfoil hat crowd.

They do give credit to ATS for the pic, even include a link to ATS where the pic can be found. Is this a sign that ATS is going more mainstream? Or maybe this was the first pic that came up when they did an image search.


There is a reason I don't post pics online....thats why,privacy issues.

For all who have,you did it to yourselves.
This is almost like sexting with someone only to learn they sent it to others to see,and than they get mad after finding out....its careless.

If that were me....I would be seriously losing it and extremely pissed off.

Hey there is always facebook. (which I don't have)

posted on Oct, 11 2012 @ 03:08 PM
link
ATS going more mainstream? How would anyone figure that? I read it as making us and ATS the punchline of their 'big joke'. Ugh..... People who tried making a hanky into a cheat sheet were blithering idiots in trying to make that mental leap anyway....It hurts to have Obama's people, of ALL people even HAVE to be the ones to point out how totally absurd the very suggestion was.

How sad.. We HAVE to think through things a little more folks..really..

Every half baked, hair brained and wacky idea doesn't HAVE to be posted as if it were declaring the discovery of the lost Biblical chapters or something.

As this shows....Sites like this and others absolutely are noticed and watched. What we say here IS read far beyond here and tends to reflect upon more than just our own direct personal images...

I just had to note that, as I feel like this was quite a set back in at least some circles that make the connection for sharing the fact I'm a contributor at ATS to those who (now I HOPE) haven't heard of the place before.
edit on 11-10-2012 by Wrabbit2000 because: (no reason given)

Oh my sweat jueebus it is Hommer

It absolutely is. Here is the thread where he posted the image shown in the OP.


Yes it is.....I recognized that picture right away.
I am SOOOO glad I am such a private person who likes to remain anonymous.

We can cook our enemies when we stand together in vast numbers and reflect the suns light. Effectively harnessing the power of the sun.

Plus protect ourselves from those bothersome Government psy programs
edit on 11-10-2012 by MDDoxs because: (no reason given)


Wrabbit,
I completely agree with everything you say 100%.
I feel we were made a joke and made fun of.
And when you see some of the threads posted, I can see why. Hopefully we can try to refrain from even participating in them so they will die out and disappear. This is my favorite site, no doubt, but sometimes I won't even show it to my friends for fear they see the troll threads.
We are watched, so we should be more thoughtful on what we write..so we're not poked fun at.
I don't like being made fun of.. Not sure if I like ATS being linked from a news site either..
But I did like his tinfoil attire..lol


I'm with you on this, they made us all look like a bunch of loons and just flat out insulted us. However this isn't anything knew and conspiracy theorists have been getting downplayed since conspiracy theories popped up. Oh well if you can't laugh at yourself...

posted on Oct, 11 2012 @ 04:01 PM
link
Most that will see that pic will already have their minds madf up, but I am hoping that they will at least see that this was a pic entered for a contest, and that this isnt his everyday clothes... even though I fear that it may be missed.

posted on Oct, 11 2012 @ 04:16 PM
link
The Obama campaign referred to several major liberal bloggers as the “tinfoil hat crowd” in a statement to Fox News Wednesday.

Giving inflammatory statements against liberals to the Right media horse sounds pretty fair and balanced to me.

Keeping up Bush policies and now this? No wonder Obama seems less and less like a liberal and more like GOP'er every day
edit on 11-10-2012 by abeverage because: (no reason given)


There is a reason I don't post pics online....thats why,privacy issues.

For all who have,you did it to yourselves.
This is almost like sexting with someone only to learn they sent it to others to see,and than they get mad after finding out....its careless.

If that were me....I would be seriously losing it and extremely pissed off.

Hey there is always facebook. (which I don't have)


I'm not sure I see your point.
I post pics of myself online.
It is my AVATAR.
I seem to be doing ok.

For all who have,you did it to yourselves.

What exactly have I done to myself?
What has this guy done to himself?
Maybe he is flattered by having his pic used in this way.
I know I would be.

Is it possible that neither stance on the subject is "RIGHT" nor is it "WRONG"?
Maybe it is just a matter of personal preference?


If that were me....I would be seriously losing it and extremely pissed off.

Why would you be that upset over having a pic that YOU POSTED online being used elsewhere?
You would certainly KNOW that if you posted a pic of yourself online that you had better be OK with it being used elsewhere. Why then would it piss you off so badly?


I am SOOOO glad I am such a private person who likes to remain anonymous.


Ummm, You're not as anonymous as you think you are. It wouldn't be that difficult to find out exactly who you are. I am always amused at people who think they are entitled to privacy when OUT IN PUBLIC!!! Especially when I am out with my camera shooting random people and places. Some people get soooo pissed, and you know what??
Not a damn thing they can do about it legally speaking.
They can always try and be civil and come up to me and say "Hey, I'm not too comfortable with having my picture taken by strangers, would you mind too terribly refraining from taking my photo again" to which I would say "Sure thing". But that's never the way it goes down. They always want to get irate, and confrotational which only makes me laugh and take more pics.

You think posting a pic of yourself online and having someone else see and use it as they see fit pisses you off???
What if a guy like me TAKES your picture in public and posts it in an online photogallery or some such?
lol, there wouldn't be a damn thing you could do about it brother. I'm sorry.

I can see how it would FEEL like an invasion of privacy but you have to keep in mind that whether you are in a park,coffee shop, Wal-Mart, or in your living room in your underwear ONLINE, you have ZERO privacy or at least your should behave as such and definately not EXPECT it, cuz.....you aint gonna get it.

I'm thinking that maybe YOU should avoid posting pics of yourself online if it is going to upset you so much at the thought of that pics being used elsewhere. At the same time, maybe it is OK if others do it, and are OK with it.

I love being awake, and not in the ignorance is bliss crowd.

posted on Oct, 12 2012 @ 06:00 AM
link
If the governments and the corporations that dictate the goings on in the world were transparent then you couldn't label anyone like that...

posted on Oct, 12 2012 @ 07:35 AM
link
If you want to see how much your ATS is being used outside of ATS just go to google and type in your user name. I've seem some of my ATS quotes on other websites.
Always be careful what you write or post anywhere on the net because once you type something and hit enter on the keyboard you're giving it to the world to use.

Have you read some of the crap people post on here? The reputation as loons is well deserved.

Unfortunately the people concerned with real conspiracy and corruption get lumped in with the Reptilian, Nibiru, Chemtrail and birther crowd.