A History of Halloween Costumes

page: 1
23
log in
join
share:
Agarta
+3 more
posted on Oct, 7 2012 @ 09:57 PM
link
Here we are again my ATS friends. Its October and that means Halloween is right around the corner. Have you prepared your costumes yet? I thought I would take the opportunity to give a little history of this holiday tradition.

The tradition of its celebration began almost 2000 years ago with the Celts and their celebration of New Years Day or Samhain(pronounced Sow-ehn). It was believed that this night was where the veil between the worlds was the thinnest. This would allow demons to enter our realm for this night only. The Adults would light bonfires and dress up, usually in skins and furs, to scare off or confuse the demons so that they would not possess members of the tribe.

This began to change when Pope Gregory III( pope from 11 February 731 to 28 November 741) moved All Saints Day to November 1st and the practice of Samhain was adopted by the Catholic Church and it became known as All Hallows(Hallow means saint, or one who is holy) Eve, later shortened to Halloween. In England, people went house to house "souling"(asking for small breads known as soul cakes in exchange for prayers, it later became asking for food and drink in return for a performance or song). In some areas people went "mumming" (parading in masks) on many holidays, including Halloween.

Although Masquerade parties were popular, it wasn't until the early 20th century that it became common practice for children to join into the practice of dressing up and joining into the festivities, candy replaced foods, and costumes were not available in stores until the 1930s which it began to become commercialized and commonly known characters became costumes for the children to wear. Costumes themes really have not changed much especially the witch. Here are some examples of old costumes from the early 1900s to today.

It is interesting to note that the swastika was openly used for its original meaning prior to the Nazi adaptation of it in WWII which was an ancient symbol for life.

Although witches costumes have pretty much been risque for their time as seen in the lack of leggings in the 1928 photo it was the 1940s that it really became apparent.

Well there you have it Ladies and Gentlemen a history of popular costumes for the best holiday of the year(arguably lol)
edit on 7-10-2012 by Agarta because: Spelling

Also, just to add. Some of the colors that we associate with Halloween- black and (sometimes) purple are directly tied to the liturgical colors used in the RCC on All Souls' Day.


This is so true thanks for adding it in.

posted on Oct, 8 2012 @ 06:29 AM
link
nice thread!!! love the old pics -- especially the one of the old gal on the rollerskates!!!!
i will be celebrating the new year in my magik rock circle with 13 gords carved out with
scary faces and candles inside!
all hail the lord of the hunt! it is his time soon!
blessed be!

- It's obviously apparent that women have taken the opportunity to dress rather scantily for a long time at Halloween. I was just at a seasonal pop-up Halloween store last week and noticed the overwhelming majority of women's costumes are akin to street walkers and pole dancers. I have no issue with this.

- The roaring 80s (), it would we seem is the time when costumes took on a starkly less occult-ish turn and went straight commercial. Less ghosts, ghouls and witches, and more Spidermans, Strawberry Shortcakes, etc. I know that there had been boxed costumes for a long time (I owned a vintage Bugs Bunny at one time), but the 80s seems to be the time where EVERY toy line also produced a costume.


LOL I know what you mean about the 80s I kind of miss those boxes with the view window so you can see that cheep plastic mask. These clear plastic bags they use now days are just no the same.

Lets not forget Gargamel and the Smurfs to (full of magic)

Originally posted by cavalryscout
Very cool thread. I love Halloween and all other pagan holidays.


They are treating themselves everyday at fast food restaurants.

People are turning into zombies as a result of all the crap that's mixed in all the McArtificial's foods.

* I should also add this:

Fast Foods TRICK
Stupid people TREAT (themselves at fast food)
edit on 8-10-2012 by Skywatcher2011 because: (no reason given)

posted on Oct, 8 2012 @ 01:45 PM
link
Ahh man the lady on the roller skates freaks me out every time I see it. Several years ago I went to Alice Cooper's Nightmare (it's a haunted house in Phoenix, AZ) and walking through it there's a lot of sharp turns and short hallways you know so you scare yourself in addition to the actors because your always afraid of what is around each corner. So my friends and I round a corner and it's a real long hallway and they've got the strobe light going kind of slow so you get fairly long pauses of darkness and at the other end is a person in that exact costume and she just rolls on down the hallway towards us without any discernible action on her part until she's about a foot away stops stares and lets out a high pitched wail. It was scary .

If you go here Cracked they have a couple articles showing interesting Halloween costumes from around the world. This is my favorite. 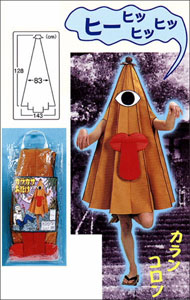 It's a Karakasa Obake, a living umbrella with one eye, one leg, and a long tounge, which is a type of Tsukumogami. A Tsukumogami is apparently any object that has existed for at least 100 years. On their 100th year of existence the object gains sentience.


Originally posted by cavalryscout
Very cool thread. I love Halloween and all other pagan holidays.