Archaeological Remains found in Peru in a building construction

posted on Oct, 6 2012 @ 06:32 AM
link
I like this one because it gives an idea of how difficult the archaeology can be in Peru. I've seen similar situations by myself during my time over there, years ago.

No need to know spanish to understand the video. Construction workers in the middle of a town in Huanchaco, Peru found these objects.

This time it had a good end, the workers reported what they found and the government sent specialists to the site, the owner of the property gave permision to stop the construction in order to proceed with the investigation.

A surprising finding of ancient jars made ​​a group of construction workers digging in a field to place the columns of a house, in the intersection of Colon and Husares streets, Huanchaco district, province of Trujillo (La Libertad).

As reported by the bricklayer Jorge Alegria, while conducting their work noticed a strange lump and began to withdraw all land to uncover a jar of regular proportions.

A few meters from the first discovery found another jar of major proportion, which unfortunately broke because the other workers were not aware of their presence when they dug three feet deep.

For locals, the finding would be of the colonial era or perhaps from an earlier era as chicha deposits appear to be used by the ancient huanchaqueros.

The age and provenance of the jars will be determined by specialists from the Regional Directorate of Culture.


Here is another case where they found a mummy, just to make my point. 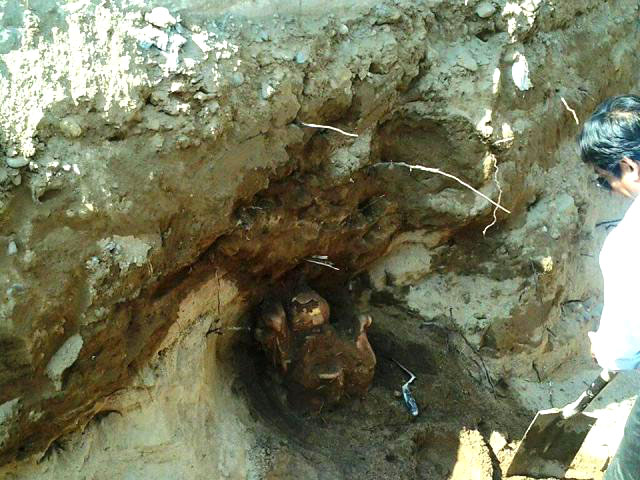 Has caused surprise among district residents Motupe (Lambayeque region), the discovery of a series of archaeological remains, in circumstances where the excavations were developed for changing water pipe networks.

The incident took place in the block 2 Anteparra streets, in the heart of this town, and according to the version of the locals, they found two strange bones, one in fair condition, while the other was destroyed by a machine when opened trenches.

i cringed when i saw him tap the jar


They made a comment about how deep in the ground these objects were found, seems deeper than the usual.

I missed this when you first posted it

Recover archaeology always fun! Thanks for posting this


Hey brother ! Yeah. some areas of the world you just need to dig a hole.

Originally posted by sneaglebob12
Where the remains of Inca origin? Will there be carbon dating on the objects found?

I don't think they'll use carbon dating, but they will find out somehow.