What's my position again? *looks down* Oh yeah!
Some say notes some say hanky... I think it's notes.
What does ATS say?
edit on 10/5/2012 by tothetenthpower because: --Mod Edit--Title Change

posted on Oct, 5 2012 @ 10:37 AM
link
Well, he certainly took notes out of his pocket and there was something white lying on the lectern. And he returned after the debate handshaking fake smile, hug from the family stuff to collect notes again and that was obvious, I remember thinking it looked odd for some reason. He was smiling his usual prep boy smile.

He certainly had a command of the numbers even though most were lies or obsfucations.

Were notes allowed by the rules of the debate?


Typically notes aren't allowed, note taking during the debate is but they both already had pen and paper at the podium waiting for them.

posted on Oct, 5 2012 @ 10:47 AM
link
Errr, typically as in high school debates, etc, or do we know that's the rule for this particular debate?
This is not an idle question, I don't know if this has hit the MSM yet, but it's a piece of dynamite if notes are specifically not allowed. Look at how he looks at the camera bank behind him as he's rounding the corner. He's being as surreptitious as he possibly can be.

posted on Oct, 5 2012 @ 10:53 AM
link
The rules for this debate have not been released, however here is a set of rules from a previous presidental debate series between Bush and Kerry:

"No props, notes, charts, diagrams or other writings or other tangible things may be brought into the debate by any candidate."

Inside the Presidential Debates: Their Improbable Past and Promising Future

BTW, this topic is also being discussed here: www.abovetopsecret.com...


I can't take credit for the discovery unfortunately... I was just sharing but someone beat me to it.

Originally posted by Kali74
reply to post by LeatherNLace


It's okay, your thread is in a different forum. I wasn't trying to be the ATS police, I was just linking the other thread so you can see what is being said over there.

I did happen uppon a copy of Barry's notes as well. 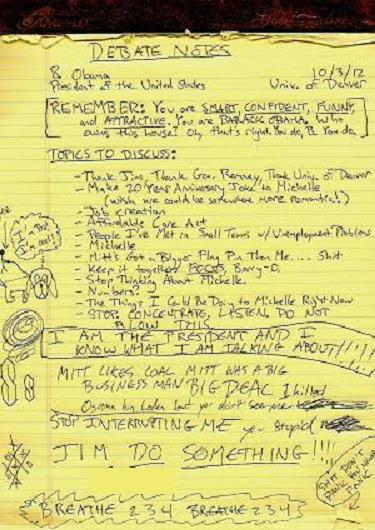 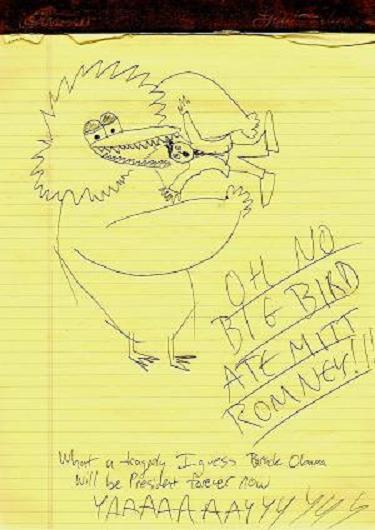 By the looks of his notepad this may be the real deal....

The Narcissist-in-Chief does not like to be challenged that was clear from his performance during the debates. That is one gets when he surrounds himself with sycophants and yes men.

They fail to explain to "The Emperor" that while he and therefore they may indeed see his clothes as magnificent, to those who are not members of his cult of personality - really he is quite naked and pathetic.

Personally, I saw him as appearing to behave as if he was above debating with Mitt. He wouldn't even look at him even when directed to "respond directly" by the moderator he didn't. IMO That is a classic narcissistic trait. He clearly sees himself as above question....

posted on Oct, 5 2012 @ 11:05 AM
link
I'm not voting for Romney after that! I don't care that everyone around me is poor and jobless and that businesses are shuttering and everyone's job is moving overseas while everything I own is losing value including my dollar and taxes are going to go up next year. Romney used notes and that isn't fair. I see your point.

Seriously, I'm not voting for Romney or Obama but if this is supposed to convince anyone to vote Obama - are you serious?

posted on Oct, 5 2012 @ 11:06 AM
link
it doesn't matter what he said in the past, or what he's done in the past. it matters how he was percieved on stage... that's how it works in this dynamic...ignorant, and naive people are swayed by simple and aggressive words, postures, and mannerisms. obama forgets who he is talking to

posted on Oct, 5 2012 @ 11:09 AM
link
I'm not sure if were allowed a topic in 'Breaking' Political News to be posted again in the threads or not - but there's a thread already started here:


I'm not voting for Obama either.
I'm voting for Johnson.
In fact IMO, they both cheated by not allowing Johnson to participate in the debate.


Just saying we've got bigger problems than Romney using notes. Hell Obama has only communicated to the American people a few times without a teleprompter - he even uses them in campaign stops and town halls.

Want this to be over? Romney should ask Obama what he meant when he told Putin that he would have more flexibility after the election to do what he wanted to do.


I don't buy into that teleprompter hype. Obama though he is doing things that I vehemently am against... he's smart as hell and a very good speaker in his own right. I posted the video because it's funny watching the Right squirm, because I despise Romney more than I do Obama and because I think it is in fact a big deal that someone running for President adopts an attitude of 'the rules don't apply to me', which was made clear in his over talking the moderator and Obama continuously.

Originally posted by Kali74
I don't buy into that teleprompter hype. Obama though he is doing things that I vehemently am against... he's smart as hell and a very good speaker in his own right. I posted the video because it's funny watching the Right squirm, because I despise Romney more than I do Obama and because I think it is in fact a big deal that someone running for President adopts an attitude of 'the rules don't apply to me', which was made clear in his over talking the moderator and Obama continuously.

Now that sounds like spin. Obama didn't overtalk the moderator and Romney? Obama interrupted Romney during his time. Romney never interrupted Obama. Romney was right it doesn't make sense for Obama to both start and end a segment of questions having both the first and the final word. If you think Obama is all that without the teleprompter just search YouTube for when the teleprompter went on the fritz. It was a night and day difference but I really don't care - if I did then I'd vote for someone that anchors the news. I'm just saying blasting Romney for having notes against someone that has barely communicated for 5 years without them is kind of funny.


Keep scamming to explain why your man god didn't perform the way the MSM/Hollywood made you believe he would. You don't seem to realize that Obama is protect by the media and that none of his policies or ideas are ever scrutinized. That's bound to bite him in the ass, because the press can't always protect him.


You're reacting as if you feel threatened in some manner, lol.
He's not my God, not even my candidate... but I guess that's what can be expected from a person that trusts Fox "news". You realize of course that the only reason they can legally have News in their corporate title is because they are an entertainment network? That was literally their defense in court and the judge had to rule in their favor because of it.

You don't seem to realize that Obama is protect by the media and that none of his policies or ideas are ever scrutinized. That's bound to bite him in the ass, because the press can't always protect him.

What?
He's protected by the media but the press can't always protect him?

His policies are never scrutinized? Sure they are... just not the important ones that Republicans are in the same boat with.
edit on 5-10-2012 by Kali74 because: (no reason given) 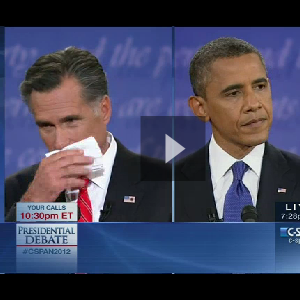