posted on Oct, 4 2012 @ 10:58 AM
link
I came across this interesting site that any fan of ancient civilizations should enjoy.

The detailed map of the ancient world is filled with cities and archeological information should provide hours and hours of education and entertainment, but the site also works as a good linking organism for everything relating to antiquity.

I look forward to this project expanding to cover more areas of the ancient world.

PELAGIOS stands for 'Pelagios: Enable Linked Ancient Geodata In Open Systems' - its aim is to help introduce Linked Open Data goodness into online resources that refer to places in the Ancient World. Why do we want to do that? Well, we think it will make all sorts of other things possible, including new modes of discovery and visualization for scholars and the general public. Pelagios also means 'of the sea', the superhighway of the ancient world - a metaphor we consider appropriate for a digital resource that will connect references to ancient places

Pelagios are a collective of projects connected by a shared vision of a world - most eloquently described in Tom Elliott’s article ‘Digital Geography and Classics’ - in which the geography of the past is every bit as interconnected, interactive and interesting as the present. Each project represents a different perspective on Antiquity, whether map, text or archaeological record, but as a group we believe passionately that the combination of all of our contributions is enormously more valuable than the sum of its parts. We are committed to open access and a pragmatic lightweight approach that encourages and enables others to join us in putting the Ancient World online. Pelagios is just the first step in a longer journey which will require many such initiatives, but we welcome anyone who shares our vision to join us in realising it.

Sitting in your college classics lecture, did you ever wonder where, exactly, the ancient cities of Luna or Velathri were? Now, you can zoom around this huge, detailed map of the ancient world labeled with cities from all sorts of archaeological records, classical text references and European imagery.

The map is the result of the PELAGIOS (Pelagios: Enable Linked Ancient Geodata in Open Systems) Project. 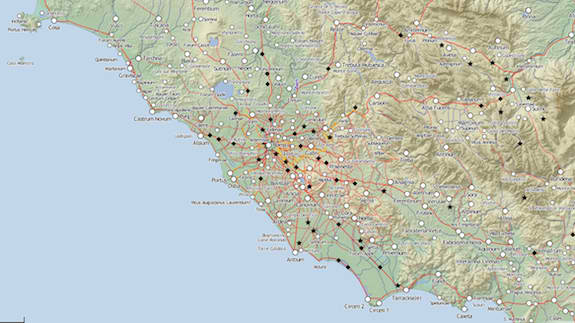 (You may be one of the few here who might enjoy this "ancient" thread about the Internet History Sourcebooks that I posted a long while ago. Then again, I am sure you're already well acquainted with it.)

I've always wondered where the ancient cultures and cities were exactly on a map and why they were destroyed.

This will provide more clues and evidence of an ancient world wide civilization, as if the pyramids around the world lining up in latitude and longitudinal lines were not enough!

God I hope we don't destroy ourselves.

The destruction of ancient civilizations has shown that we humans come under enough pressure from major geological events such as Super volcanoes, Mega Tsunami's, Earth quakes, meteor impacts and alcoholism. There is no need to destroy ourselves with WMD's!.


Thanks for posting the link to that thread. I am aware of the Sourcebooks, but linking it here provides an addional route to information on our ancient history for those unaware of the site's existence.


Yes, that's exactly what I had in mind.
Thanks for understanding the idea.

I hope many more people get to see this thread and profit from this project.


Yes this type of project will make it easier to compare what is found at sites with other sites, always a problem in the past.

Thanks for the posting it Isyeye


This will provide more clues and evidence of an ancient world wide civilization, as if the pyramids around the world lining up in latitude and longitudinal lines were not enough!

Actually it works in the reverse by showing just how massive the evidence is for known civilizations - ie millions of artifacts, thousands of sites, it makes one wonder why civilization x has none at all!

If you have a globe and put random dots on it - it is impossible to NOT have lines pass thru some of them. The first civilizations appeared in the temperature zone best suited for human life and development of agriculture, ie not particular cold
edit on 4/10/12 by Hanslune because: (no reason given)


Thanks for bumping - I gave it a flag and a star, yeah real information tends to get short noticed and be grossly underappreciated on ATS


I suppose it's not "conspiratorial" enough.
After all, it deals in FACTS.

Originally posted by isyeye
reply to post by Vanitas

Ditto the cult of 'possibilities' is swamping science
edit on 5/10/12 by Hanslune because: (no reason given)


the cult of 'possibilities' is swamping science

I have to agree with you. While it's interesting and sometimes entertaining to study some of the more outlandish ideas of our history, all too often real facts and information gets pushed to the side in favor of more "fantastic" theories.

It's fun to research topics such as Ancient Aliens, but neglecting the data that science submits to the debate is becoming more and more prevelent.
edit on 5-10-2012 by isyeye because: (no reason given)

Originally posted by isyeye
reply to post by Vanitas


I agree. Sometimes my fingers are smarter than my head. :-)


While it's interesting and sometimes entertaining to study some of the more outlandish ideas of our history, all too often real facts and information gets pushed to the side in favor of more "fantastic" theories.

It's more than just interesting - it is mandatory for real progress.

However, the same rule applies as in any art or discipline: first, have a thorough- and I mean, THOROUGH - command of what IS there, of the basics. When you do, you can indulge in flights of fancy derived from what you know.

Why not open a forum dedicated to learning resources?

This thread would belong in it, as would a few others.
They would be readily available, so nobody would have to dig them out of the deep sands of oblivion.

(Yes, I tend to wax poetic when I am annoyed. )


Yes for many years I've tried to convince archaeologists to create a Talkorigin type website that would have detailed answers to common - and uncommon fringe claims. Never could get anyone with enough prestige to front it.


Oh, I meant such a forum here, on this website.
But what you're suggesting would be of great help, of course.
(The problem is that those who'd need it the most would probably never visit it. :-))
However, I am surprised that there was no interest.


Thanks so much for the map resource site. I'm sure it will prove very useful.

Although, they've got my curiosity. Why name the project "Pelagios" meaning "of the sea" when they are only mapping cities on the present coast in Roman and Greco times? The maps aren't showing the sunken cities off the coast when the project is named Pelagios.

Oh well. We all need to know what's on land now before looking in the sea for what is lost.