Is this the October surprise? New Obama Tape to be Released... 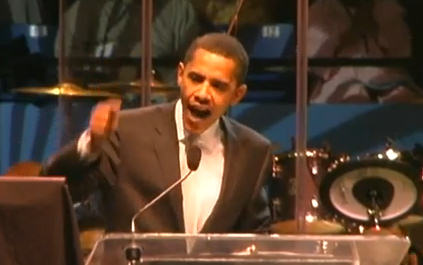 Drudge is currently reporting the release of a video that some say will prove to be the most controversial yet concerning Obama.

The title is: "TONIGHT: OBAMA'S OTHER RACE SPEECH."

The video is slated for release at 6 PM Eastern standard time. I have a feeling it's about to get very ugly.

From what I'm reading it will appear on The Daily Caller.

I wouldn't vote for either of them.
I'm still hoping for a meteor to land on them both at the debate.
edit on 2-10-2012 by watchitburn because: (no reason given)

Either than or let me guess the words Islam, Hawaii or Kenya may crop up

posted on Oct, 2 2012 @ 06:03 PM
link
My guess is the same repackaged,recycled rhetoric we have heard for the past 4 years from Obama.

Not an original thought among that lot.


THE ACCENT... THE ANGER... THE ACCUSATIONS... THE SERMON... THE SHOUT OUT TO REV. WRIGHT, WHO IS IN AUDIENCE... 'My pastor, the guy who puts up with me, counsels me, listens to my wife complain about me. He's a friend and a great leader. Not just in Chicago, but all across the country'.. FOXNEWS 9 PM ET... 'We don't need to build more highways out in the suburbs. We should be investing in minority-owned businesses, in our neighborhoods'..

OBAMA DECLARES HOW POOR PEOPLE: 'Need help with basic skills, how to shop, how to show up for work on time, how to wear the right clothes, how to act appropriately in an office'... Developing...

Or is it just some right wing paranoia blog we would call you out on?

posted on Oct, 2 2012 @ 06:26 PM
link
Its probably going to be a tape from 1976 that shows him at a cookout with some dead dude, that they now just discovered had ties to socialists.

Same as in all of the other "devastating" tapes the right wing propaganda machine has released.

posted on Oct, 2 2012 @ 06:29 PM
link
Already have my beer and popcorn ready!!!! This is something we knew all along, now, the sheep will see for themselves. Were not talking maybes like with the birth certificate thing, this will be PROOF of who he really is, again, like we really needed more

They have fooled almost a whole country full of people that we only have two choices...

There is a solution...

posted on Oct, 2 2012 @ 06:38 PM
link
LOL...... Like this is a surprise. I had people giving me the "deer in the headlights" look for 6 months after I said Obama gets re-elected they'll be an uproar, and if Obama DOESNT get reelected they'll be riots.

What else we got?

We're screwed with our overpaying international "protection?"
It'll be Romney's fault. Or Obama's

(Adding more butter and SALT to the mix)

I'm NOT rubbing my hands together thinking this is going to get better as a playout of events.

I'm actually pissed about it.

He we go. I think more surprises are on the horizen.

posted on Oct, 2 2012 @ 06:40 PM
link
Um, you people do know that "October Surprise" is a reference to the Presidential Debates that take place every October during a Presidential election year?

tkwasny
+3 more
posted on Oct, 2 2012 @ 06:42 PM
link
Obama can be standing on the steps of the White House holding a severed baby head in one hand and a bloody knife in the other and Obamtrons will vote him back in.
edit on 2-10-2012 by tkwasny because: typo fix

Btw he is dead right? Osama?


Bush did exactly that in Baghdad, yet he got in somehow, then he gave the bankers all your money...

Originally posted by tkwasny
Obama can be standing on the steps of the White House holding a severed baby head in one hand and a bloody knife in the other and Omamtrons will vote him back in.

What the hell is an "omamtron"?


Originally posted by tkwasny
Obama can be standing on the steps of the White House holding a severed baby head in one hand and a bloody knife in the other and Omamtrons will vote him back in.

What the hell is an "omamtron"?

There are some racial tones, and it also shows how much of a hypocrite he is.

Least people have something to compare it to.


Bush did exactly that in Baghdad, yet he got in somehow, then he gave the bankers all your money...

Both political sides work for the same master. If/when Romney gets in, he'll be the next to get the blame.

posted on Oct, 2 2012 @ 06:53 PM
link
the financial collapse conveniently happened as soon as obama got elected.

that'll show the american people never to elect another black man as president.

and now comes the whitest of white people to the rescue, unless he's speaking to latinos, then he's orange.

everything about america is racial.

romney speaks of the 47% that feels entitled to of all things, food, when rich, middle-aged white men in america are probably the most self-entitled people on the whole continent.

america should elect obama again so he can stick it to them some more. and since he doesn't have to worry about re-election, he can go all out and really hammer them and let the worst of them taste how the 99% live.

maybe they'll learn some humility and stop screwing with the lives and happiness of their fellow countrymen and give back all they have taken.