posted on Oct, 2 2012 @ 12:11 PM
link
The Peruvian army has captured something truly horrific, a human size bat, this animal as you can see in the photograph appears to be a giant bat.
Apparently this animal has been frightening locals living near the amazon jungle bordering Peru.

Recent reports state that this animal attacked several people walking through the jungle and elsewhere in Latin America.

Many say that this is the Chupa Cabra, an animal reported to attack various types of livestock and suck their blood, but this creature is not a Chupa Cabra, but probably it is a giant golden-crowned Flying Fox, one of the largest species of bats in the world with a wingspan of 1.5–1.7 m (4 ft 10 in–5 ft 7 in).

This creature exceeds all sizes.

I am going to stop putting up bat houses! 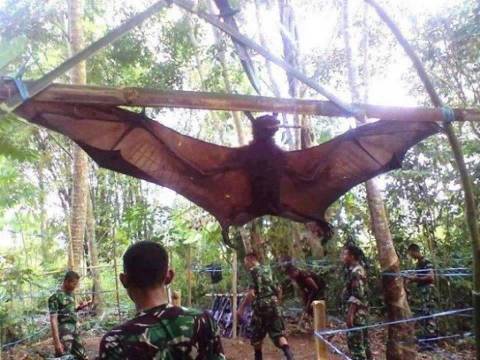 OP assist is this the image OP? If so I wonder what frequency they alert to, to come up now? They would have to dwell deep inside some caves that none are entering or are entering and not escaping?
edit on 10/2/12 by Ophiuchus 13 because: (no reason given)

I hope there are more of them, just for their survival sake.

Not saying I would like to meet one at night, but really, it is pretty cool.

posted on Oct, 2 2012 @ 12:18 PM
link
I think it just looks huge because it's being hung in the foreground of the picture.
It's probably normal sized.

posted on Oct, 2 2012 @ 12:19 PM
link
Why do I get the impression that this would be something for the national enquirer?

I don't know anything about the source but I'm hesitant to believe this just yet.

Originally posted by subject x
I think it just looks huge because it's being hung in the foreground of the picture.
It's probably normal sized.

If this thing WERE real I am sure it would be a big deal and not just showing up on 9gag, ATS and a site I've never heard of before.
edit on 10/2/2012 by miniatus because: (no reason given)

posted on Oct, 2 2012 @ 12:28 PM
link
Yes it does look big but it is close to the camera and gives the impression of being bigger than it is. Still impressive non the less. Maybe it's just a one off. Just like you get in humans. Some people attain what we would consider to be giants and some people are dwarfs. Isn't nature great, always trying out new versions of the same model. That's how we evolve and improve to get the most suitable version to fit the environment. You never know we may evolve wheels instead of legs the way we are heading. Now that's a thought isn't it?

posted on Oct, 2 2012 @ 12:29 PM
link
With a wing span of that diameter in the discription, that would put this thing at just under 2 ft ish nose to toe
So a small child yes

Looking for forced perception there's a dagger in the rack system the bat is in ......that knife looking at it would be 16-18 inches

Looks more like a trick of the camera like the old Cammel Spider shots from a long time ago.


A video at this link says it may be real. Unless you want to sit through about a minute and a half of other stuff like talking ravens, jumping manta-rays and the like, skip to about the 1:45 minute mark.


Bats of the genus Pteropus, belonging to the megabat suborder, Megachiroptera, are the largest bats in the world. They are commonly known as the fruit bats or flying foxes among other colloquial names. They live in the tropics and subtropics of Asia (including the Indian subcontinent), Australia, islands off East Africa (but not mainland Africa), and a number of remote oceanic islands in both the Indian and Pacific Oceans.[1] There are at least 60 extant species in this genus.[2]

Originally posted by Neocrusader
With a wing span of that diameter in the discription, that would put this thing at just under 2 ft ish nose to toe
So a small child yes

Looking for forced perception there's a dagger in the rack system the bat is in ......that knife looking at it would be 16-18 inches


I'm with you on that. It looks like a bayonet as there is a military presents your size estimate would be a bout right. 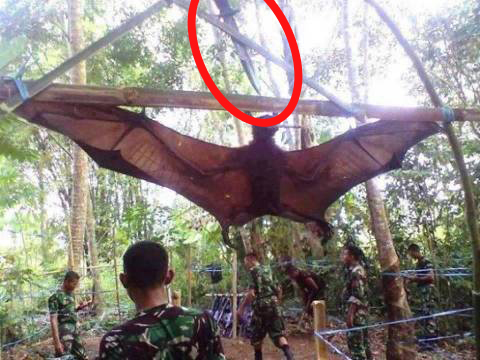 So unless its a freakishly huge hunting knife I wouldn't say the bat was anything like as huge as it looks
edit on 2-10-2012 by davespanners because: (no reason given)