Allowing women drivers in Saudi Arabia will be end of virginity

Allowing women drivers in Saudi Arabia will tempt them into sex, promote pornography and create more homosexuals, according to some conservative Muslim scholars. Academics at the Majlis al-Ifta' al-A'ala, which is Saudi Arabia's highest religious council, said the relaxation of the rules would inevitably lead to “no more virgins”.
Saudi Arabia is the only country in the world where women are banned from driving.

It warned that allowing women to drive would "provoke a surge in prostitution, pornography, homosexuality and divorce". Within 10 years of the ban being lifted, it claimed, there would be "no more virgins" in the Islamic kingdom.


Academics and Scholars ?.WTF is with this country ? If academics and scholars are so out of their mind what is with ordinary citizens?.What is this insanity ? Why media in US are so quiet about this but jumping on Iran like a mad dog.Oil will dissapear in near future .

posted on Oct, 2 2012 @ 08:49 AM
link
Isn't this the same type of bull we saw in American during the fight to give women the right to vote? There are always religious conservatives who think the world is going to end when there is equality.
edit on 2-10-2012 by Kaploink because: meh

Because it has # all to do with them.


Although this is complete madness and sounds like some witch doctor from 2,000 years ago trying to keep controle of all the people. It has nothign to do with American media, nor any others. If the people want to live their lives that way and be dictated to, then let them. They don't need Team Ameirca


...oh damn...I hope the don't read this...they'll make it illegal for women to sit in the backseat.
...maybe they already have.


No, I think it's illegal for them to sit in the front seat, so they're trying to make sure that it happens.

posted on Oct, 2 2012 @ 09:03 AM
link
Well maybe if they made bucket seats manditory it would slow down the progression a bit maybe 20 years.

posted on Oct, 2 2012 @ 09:05 AM
link
I find this very funny. Look Saudi Arabia. In America we have a diverse culture. There are many wives who drive, and do not cheat on their husbands. Their are people who drive and never have any sex until their in their 30s or 40s. And we allow dating, and freewill to have sex while dating. Because maybe you CAN be in love with someone and not be married. You'll find out one day that all your institutions and laws are in vein of what human reality is. Besides God never said anything about marriage, and since all "holy" books, christian, islam, hindu and others were penned by human hands, they have been slanted by the times and persuations of the people writing them. I believe your side of the world will one day see the wisdom in freedom, and control of the self will come naturally throguh time and the right application of justice, that doesn't mean it's ok to jail or kill women or men who break "virginity laws" which are ridiculous forms of ultra control by radicals.

Driving allows women to take their children to parks or museums or school. It allows them to go shopping for food so they don't have to carry all that stuff for blocks, or miles. It lets women and men feel a little more freedom, even in our country we feel oppressed by the system. Freedom on the road, as long as you don't violate the traffic laws gives us a sense of self control.

Think of tourism, how much money you'll make by having single women who drive town to town looking for culture and experience. Or maybe you just like women to be like robot slaves because you just can't be real to yourselves without consulting something written long ago, in an age of war, which bring that paradox to our time for no reason other than your own misunderstanding of the self and it's unrealized potential with freedom.


I recall Digitaljournal also raising this story in December last year - not too sure why its being revisited all of a sudden even though the link is dated same date.

Either way, can anybody enlighten me how these so called 'scientists" arrived at the conclusion that within the next 10 years they will run out of virgins and experience an increase in homosexuality and divorce - all from driving a car.

I think those lads are subjected to an ongoing dose of "desert faith logic-lock"
edit on 2-10-2012 by Sublimecraft because: (no reason given)

I thought what Id do was Id pretend I was one of those deaf-mutes. That way I wouldnt have to have any goddam stupid useless conversations with anybody. If anybody wanted to tell me something theyd have to write it on a piece of paper and shove it over to me. Theyd get bored as hell doing that after a while and then Id be through with having conversations for the rest of my life
edit on 2-10-2012 by NullVoid because: (no reason given)

Allowing women drivers in Saudi Arabia will be end of virginity

is just so wrong on so many levels...

Take it from me, it's not 'driving' but riding around in cars with cute boys that tends to cause that loss of virginity!!!


How many of the suadi "royal" family have been busted with prostitutes,doing drugs etc?
More than a few I think.

They should get those goons in line before they go making up garbage about the womenfolk of their country IMO.

I wish I could put it down to them being a "backward"country,but I think its worse than that-they do know better,yet choose to continue to opress their women.

A sick regime,fully supported and traded with by our own sick western governments IMO.

1) Yes, whoever posted it was correct - they have to sit in the back seat.

2) They cannot dive at all - in fact they are not allowed to leave the house without an adult male relative.

However, as far as shopping and entertainment goes they have women only malls with guards out front. We had some females on our team who went inside for the day - said it was pretty swanky with spa's, upscale salons, fancy restaurants a movie theater etc.

There are also women only pools and exercise clubs which are of course surrounded by very high walls and guarded. Inside they wear bikini's and sun themselves just like our chicks do.

At least in Saudi women can get an education and a job (with their father/husbands permission of course). Bottom line is that Saudi Arabia is a Kingdom and basically a theocracy. Not ideal for us - they have their issues of course.

All that said, they are simply afraid that if women get the freedom to go about town they will give into temptation or temp men into violating their laws.

Having been there - the kids find ways to do all that stuff anyway just like kids in any culture do. Teens (more accurately men in their early 20s and girls 16-18) have very active social lives both male and female. The only difference is here you get busted by your parents and grounded - there you get busted by the religious police and punished under Sharia.

Men in Saudi Arabia practice closet homosexuality into their early to mid 20's especially those in the military. It is something of a status symbol as well for a rich man to have a younger male assistant as his "lover" a kept man basically. The richer and more powerful a man is the less he has to be secretive about this relationship.

Usually they just make them get married if they found them to have had sex. This is the case when both kids are from a family of equal or relatively equal status.

Very rarely (but it does happen) is a couple punished for fornication - in these cases it is usually the daughter of some lower class person having relations with the son of a man who has status.

Take my comments not for agreement with their medieval culture but simply information as I spent several months on and off there probably totaling more than a year.

posted on Oct, 2 2012 @ 09:58 AM
link
Was once a member of a Catholic religious community and we were forbidden to have a female passenger in the car for the same reasons as stated by these Muslim fanatics..........I rebelled and gave a ride to my 75 year old female Philosophy prof and of course there was "hell to pay." Needless to say I am no longer interested in the religious life Ha Ha
edit on 2-10-2012 by de_Genova because: aw shucks

posted on Oct, 2 2012 @ 10:01 AM
link
No matter how hard the rest of the world tries to keep women "in their place," evolution (by way of television, Internet and newspapers) has gone too far beyond such backward thinking.

Look at how much the western world has changed global culture. I remember as a child that women in Japan still wore kimonos on a daily basis. Here's a picture of women in Japan today: 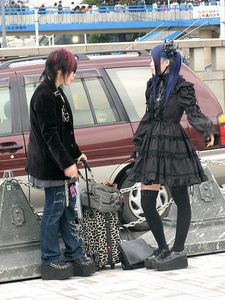 posted on Oct, 2 2012 @ 10:04 AM
link
all i can say, is that i want to ride in that car...sounds like a hell of a party would be going on...sorry, base instincts hit my funny bone, prompting a short bout of diuretic key punching.

LL
this is the same type of misogynistic bullcrap the republicans, and their dominionist/quiverfull majority
have been spouting lately. we are merely being shown these stories in the media to distract, and cover up that worse religious fanatics are lurking, like a serpent in the bosom, in the heartlands of america , plotting the imposition of their own brand of sharia.

posted on Oct, 2 2012 @ 10:15 AM
link
Wait wait wait, how can you have both more homosexuality, and more women losing their virginity and becoming prostitutes?

posted on Oct, 2 2012 @ 10:16 AM
link
I can't imagine how these "conservative muslim scholars" conclude there will be a "surge in prostitution, pornography, homosexuality and divorce".

But obviously no good can come of it, just yesterday I saw a woman getting into a car the wrong way. Through the driver's door.