posted on Oct, 1 2012 @ 11:03 AM
link
Now, first of all, I will admit I believe an Iran war is coming. I've posted many times regarding foreign policy think tanks such as Brookings that advocate how will will start etc. There has been an ongoing propaganda effort from the media but I'm starting to question whether we are entering a new age of psychological warfare where the lines between what is real and what is fabrication are next to impossible to define.

Here is a video discussing the Patrick Clawson comments calling for a 'false flag' to start a war with Iran. Max Igan & Ken O'Keefe go through Clawson's comments and discuss how 'blatant' it all is-

Clearly, Clawson is out in the open advocating a 'false flag' event to start war. This is something that foreign policy think tanks have hinted at for a few years. As the video shows, the entire thing is almost a parody and a joke, it couldn't be any more out in the open.

With this in mind, I've begun to question whether this is a psy ops to distract us? Surely they cannot operate this far into the open?

If we rewind to 9/11 and the PNAC, they called for a 'New Pearl Harbour.' With developments with Iran, history is seemingly repeating. At the same time, the internet has allowed us to research all this information. If you type in Patrick Clawson, literally hundreds of sites pop up discussing his recent 'false flag' comments.

The elite, as it were, are clearly far more intellectual than us. They have practised psy ops for decades, they may well have mastered it as an art form in shaping public opinion. With the Iran 'false flag' theory now so out in the open, are we victims of psy ops and a new form of propaganda as the war shifts to the homefront as millions of people are 'awakening' via the internet?

I just don't believe at this point that Clawson could discuss this so literally if it were really the plans of the elite. If a 'false flag' happens, millions of people will have seen Clawson's comments.

It reminds me of the Olympic Games conspiracy. I know a lot of people think it was 'conspiracy' nonsense, but the fact that predictive programming was used is there for all to see. This poster proves that 'someone' was working to generate conspiracy theories regarding the Olympics- 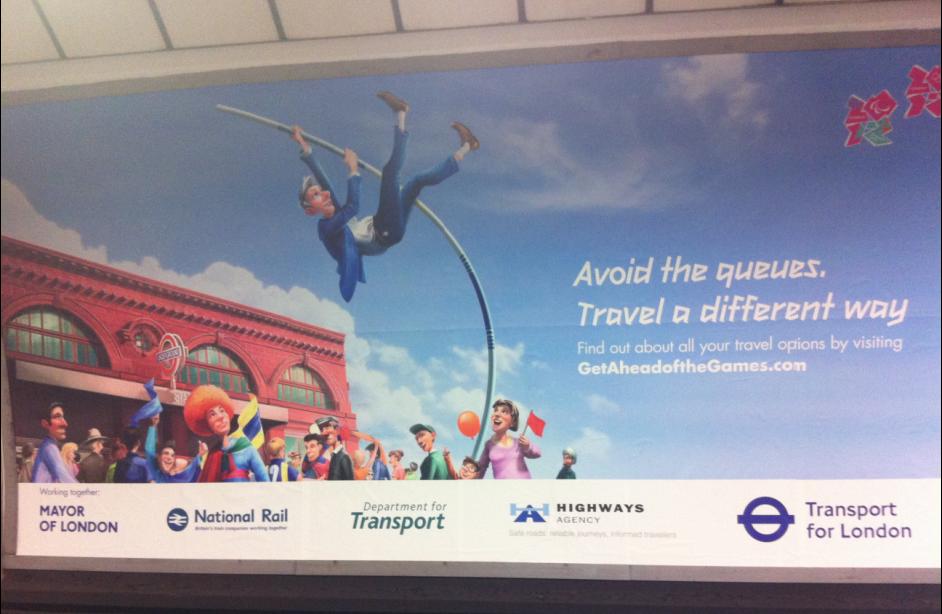 It was discussed on ATS many times and was just one example from many that naturally led 'conspiracy' minded people to think a 'false flag' was planned to occur. From the poster we have a stereotypical view of a potential 'Muslim Extremist' walking away from a crowd of people looking over his shoulder with the lady closest holding a red flag.

Now obviously, the Olympics came and went and were a great success. At the same time, the effort was made as seen from the above poster to impose the idea something bad was going to happen.

Millions of people across the western world 'research' conspiracies and cover ups and read that the PNAC called for a 'New Pearl Harbour'- it is only natural that the elite or whatever you want to call them will adjust to this and fight against it. Hence I believe we are entering a new age of warfare were 'psy ops' are a major tool to spread disinfo amongst the growing 'conspiracy' mindset.

It's no longer enough to just dismiss 'conspiracy theorists' and ignore them, the elite see how the internet allows millions to be influenced. In this context, the fact that government agencies could be setting up fake conspiracies as a form of disinfo is very feasible. The fact of the matter is, we can no longer tell what is a fabricated 'conspiracy' threat to distract us.

Personally, I still believe an Iran military conflict is planned and set. However, I'm suspicious of the comments by Patrick Clawson, it seems a little too blatant and in our faces to be legit. Watching the video, it looks scripted.

I could be wrong, but I guess that is the point! The Iran 'false flag' theory could be legit, but also be aware it could be a distraction from a planned currency collapse or developments in other areas of the world. Whilst conspiracy theorists focus on Iran, events might escalate in the Pacific with China for example.

This does seem too blatant. We know they are masters of manipulating the mind. They know that the internet has become a great tool for the people in the effort to dig up information that has been buried and kept from us for hundreds of years.

I think your scenario is plausible. In order to combat the "conspiracy theorist", which as Noam Chomsky put it is only a term used to discourage institutional analysis, they must flood reality with fodder used to distract. If they keep hinting at something, conspiracy theorists will keep jumping at it, until it become like the Boy Who Cried Wolf. Eventually we will either give up, or when something does happen there will not be one singular moment we can point to that illustrates complicity. More then ever, we need to be able to discern between fact and fiction.

I, like you, think an Iran war is planned and set to come. The question then becomes for them how do we get the people there? How do we convince them that it's the right thing to do? How do we sway the public opinion as a whole? As conspiracy theorists, we know the False Flag MO and know how well it works. I would expect more of the same, but not in the context of past false flags. I expect something different, something they have complete control of so they can dismiss and cover any and all of their tracks. They didn't do such a good job of that with 9/11, in my opinion. But then again, what they are trying to achieve is so large scale, so mind boggling, it's almost impossible to assume they would have complete control over everything. I think it's natural for them to slip up in little areas that most people will not pick up on. If that's the case, then our job is to find those threads and pull them hard until the sweater starts to unravel.

I think the PSY war is on though, and it's communities like this that need to pull together to combat this type of danger. I think many of us take for granted what we have here, and won't realize until it's gone just how important it is. We have a great resource - each other, and we need to keep the conversation going. That's the only way I see us making any head way against such a psychological threat.


I'm glad you saw my argument and you make some great points- that plenty of disinfo is flooding the internet to combat the growing 'conspiracy' way of thinking.

I knew a thread like this would not get much attention though because people do not like to think they are being manipulated.

Glad at least one poster saw my point though

posted on Oct, 2 2012 @ 11:29 AM
link
here's a article which points out that false flags are just one way of 'war'
the antagonists, including the US/UK/Mossad...the AQ/Muslim Brotherhood/Mujihadeen/Salafists..et al RU/CH incl.


fine summary piece to add to your knowledge references

posted on Oct, 8 2012 @ 05:32 PM
link
It's all planed, all those wars, as they are also planning to provoke the 3rd world war, and that right in the middle of those Muslim countries. They've been planning it for at least 300 years, as it was said in Pike's letter.

Anyway, I think it would be interesting to listen Max what he has to say about the upcoming events, especially the third world war. He will be doing the speech in Opatija - Croatia in an 8h seminar scheduled together with Rick
Simpson and Jindrcih Bayer who are both and pharmaceutical conspiracy subjects and into a cure for cancer.

Ther is also live stream available and all the info's necessary are right on this page: speechevents.com...