Ever seen one of these creatures?

posted on Sep, 30 2012 @ 06:45 PM
link
An ordinary day at the beach, ready to set my camera to shoot the sunset, I spotted this thing laying on the rocks.
At first I was thinking it's just a colorful shoe or boot someone left behind or washed ashore.
As i came closer, the shoe became 'what the hell is this' ?

I was guessing some sort of jellyfish so i took some shots of it to investigate it later.
I must say i was stunned how colorful it was and how it was glued to the rocks.
On the photos you can't see it that well but there were these blue cords, tentacles hanging from it sticked to the rocks ( i shot a video of it were it's clearly visible).

Anyone ever seen this before?

So at home, i searched the web for 'blue-purple jellyfish-like sea creature' and came onto THIS
Which led me to Siphonophorae
and to
A Portuguese man o' war.

The Portuguese man o' war lives at the surface of the ocean. The gas-filled bladder, or pneumatophore, remains at the surface, while the remainder is submerged.Since the man o' war has no means of propulsion, it is moved by a combination of winds, currents, and tides. Although it can be found anywhere in the open ocean (especially warm water seas), it is most commonly found in the tropical and subtropical regions of the Pacific and Indian oceans and in the northern Atlantic Gulf Stream.


It is rare for only a single Portuguese man o' war to be found; the discovery of one usually indicates the presence of many, as they are usually congregated by currents and winds into groups of thousands.Attitudes to the presence of the Portuguese man o' war vary around the world.
Given their sting, however, they must always be treated with caution, and the discovery of men o' war washed up on a beach may lead to the closure of the whole beach

Ok tropical and subtropical regions, hmm not realy the case here and i only saw one of these so maybe it's a loner,wanderer caught in the wrong current. I will check the beach tommorow to see if his buddy's have joined him.

Anyhow, what seem strange to one person is normal to the other. I'm sure many of you live in tropical paradises where you see these creatures everyday.
It's always nice to learn something new about nature.

Amazing what you can find when beach combing. I miss it.
Star and flag for beauty and strangeness!


That is for sure! You took some beautiful pictures of it too!

I never found anything that cool on the beach, I think Japanese fishing globes (Green glass balls) are as close to coolness as I have come other than just nice shells and an occasional octopus. 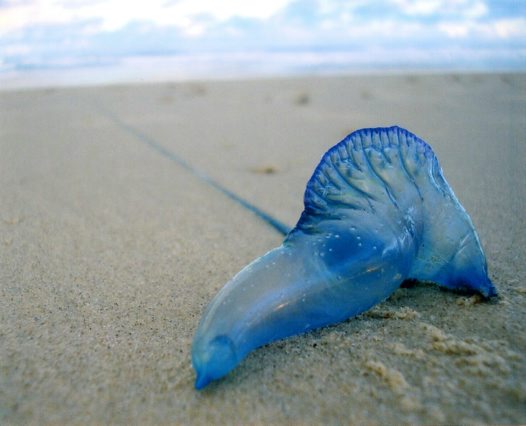 Be careful and don't touch the tentacle like strands. They carry stingers with a neurotoxin that normally paralyses smaller prey (like fish) but are agonizing to humans.

If you do get stung, vinegar apparently helps deactivate the sting.


As i said, i'm sure some people are familiar with these creatures. I live near the sea and one of my occupations is photographing seascapes so i spend a lot of my time on the shore and it's the first time in many years i came onto these guys.
Maybe because of the warm ocean current we had this summer. We've had some basking sharks and dolphins in our harbor this summer. Which is fairly rare here.

It must be cool sight to see a whole family covering the beach.
(on the other hand not cool, i guess without water they will die)

Thx for the input


Don't worry, the time of playing around with jellyfish is long time gone.
Although the feeling was there

Originally posted by Qumulys
I'd be putting my money on a Blue Blottle!
(great photo's by the way!)

Yep.
It's strange no one thought it's some sort of sextoy or a fashion designed condom

posted on Sep, 30 2012 @ 08:21 PM
link
Very nice pictures.
Thank you for sharing.
I really like Jellyfish. I think there is a lot more going on with those creatures than we know.
They don't have an actual brain do they?

Originally posted by chr0naut
reply to post by intergalactic fire

Be careful and don't touch the tentacle like strands. They carry stingers with a neurotoxin that normally paralyses smaller prey (like fish) but are agonizing to humans.

If you do get stung, vinegar apparently helps deactivate the sting.


Sorry to jump in and correct you, but the wrong first aid can be dangerous in some circumstances
First Aid Information: Bluebottle or Portugese man-o'-war (Physalia sp.) Sting

First aid consists of removal of the tentacles, preferably with forceps. Immersion of the area in hot (not scalding) water may alleviate pain.

Vinegar is not recommended.

Analgesia may be required, although most stings respond, if hot (but not scalding) water is not available, to ice packs or topical anaesthetic agents.

having been a deckhand on boats and pulling in ropes, I have had my fair share of stings by the blue bottle.
they get wrapped around the rope as it is dragged through the water and as you grab them you get a burning sensation, must admit that I was getting immune to the sting in the end


So begins the invasion of the alien neon slime plague,whom some first thought were an innocent type of jellyfish...

posted on Oct, 1 2012 @ 12:22 PM
link
Man O War jellies float on the surface. The critter in your photo is clearly moving along a submerged surface and the critter has a "foot" that it moves on.

It's nudibranch, or sea slug
en.wikipedia.org...