posted on Sep, 29 2012 @ 07:09 PM
link
"Around 200,000 people have reportedly come out in support of opposition party Georgian Dream in what may become the biggest ever rally to hit Tbilisi. Georgia is set to cast votes in a parliamentary poll Monday.
The Georgian capital was strewn with blue colors Saturday as the South Caucasian country's parliamentary campaign comes to a climax.
“One of my promises has already come true: all of Georgia is standing united today,” opposition leader Bidzina Ivanishvili told tens of thousands people gathered at central Freedom Square to show their support for him. “All Georgia tells the authorities…”
rt.com...

Imagine you turned on the TV and saw the Whitehouse surrounded like that? Not that that could ever happen but still one can day dream. 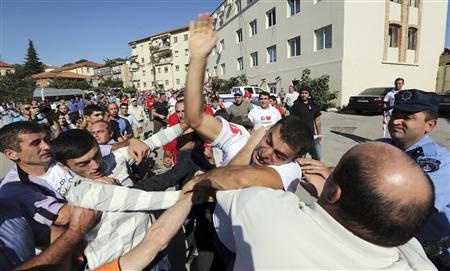 Supporters of the ruling National Movement Party scuffle with supporters of the opposition Georgian Dream coalition during an election rally in the town of Signagi, 115 km (71 miles) southeast of Tbilisi, September 26, 2012. REUTERS/Stringer 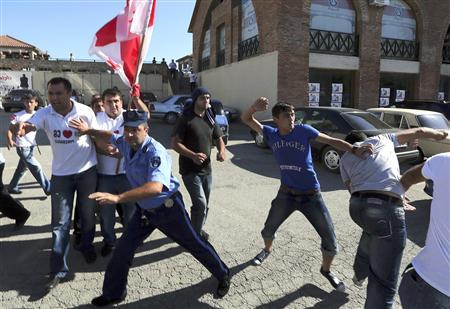 A policeman (C) tries to stop supporters of the ruling National Movement Party as they scuffle with supporters of the opposition Georgian Dream coalition during an election rally in the town of Signagi, 115 km (71 miles) southeast of Tbilisi, September 26, 2012. REUTERS/Stringer

Good lord! I do love seeing people in these numbers taking to the streets to voice their concerns!

Tens Of Thousands Turn Out For Opposition Rally In Tbilisi

Tens of thousands of opposition supporters have rallied in Georgia's capital in a show of strength two days before parliamentary elections.

Addressing crowds in Tbilisi’s central Freedom Square on September 29, opposition leader Bidzina Ivanishvili said the current government had only hours left in power before it was voted out in the October 1 vote.

"This regime cannot be called a ruling force and the people have already delivered a verdict," he said. "We will just make it formal on October 1 and let it come into force."

Ivanishvili’s Georgian Dream coalition is up against President Mikheil Saakashvili’s United National Movement, which now holds nearly 80 percent of the seats in parliament.

Most observers see the race too close to call.

Ivanishvili told his supporters that the current government has "led the country to a dead-end."

He promised a return to law and order should his party win, saying "Saakashvili's system based on lawlessness and torture should be destroyed."

Well, Georgia's Government has tried awfully hard to start a war with Moscow at least once. I suppose the opposition is on Putin's friend list in a major way. Does this make them on our friend list or the other one? That part of the world is getting awfully hard to figure out as such small nations are coming to play such BIG rolls. It's strategic location to the north of Tehran and partially bridging the Black Sea/Caspian Sea make it a real important place for outcome, IMO.

Should be interesting to see what elections there bring for change, if anything major.

Such a small nation, truly, to be such a critical lynchpin in so many ways. Recall the only options the US has for supply to Afghanistan when Pakistan isn't in a good mood....It's a whole different region looking at it from this northern perspective, isn't it?

They were protesting torture. Apparently a man was in jail where he was beaten and raped. The video was broadcasted on their networks for everyone to see.

Georgian minister of corrections and legal assistance Khatuna Kalmakhelidze is to resign after videos showing prisoners in a Tbilisi jail being beaten and raped were broadcast last night.

Ten people have been detained and several are being questioned in connection with the "torture" at Gldani prison Number 8 in the Black Sea nation's capital, the Prosecutor's Office said in a statement.

The videos were sold for a "significant" amount of money through inmates Tamaz Tamazashvili and Tamaz Elizbarashvili, according to the statement.

Tamazashvili's son-in-law, Irakli Garibashvili, heads the foundation of opposition leader Bidzina Ivanishvili, whose Channel 9 was one of two TV stations to run the prison footage.

Several hundred people gathered last night outside the Tbilisi Concert Hall, where Mr Saakashvili was attending a performance, to denounce the abuse.

Nationwide rallies are under way today.

In a televised speech today, Mr Saakashvili said he was "very angry" and "shocked" after watching the footage.

He later instructed the police to assume temporary control of all prisons, called for the system to be "overhauled" and ordered emergency visits to be granted to relatives that have gathered outside the jail.

Prime minister Vano Merabishvili told a government meeting that he would take personal responsibility for punishing everyone involved in the abuse.

"The authorities need to ensure full accountability - including criminal accountability - for this abuse and take measures to prevent it from ever happening again," Giorgi Gogia, senior Europe and Central Asia researcher at Human Rights Watch, said.

The US urged Georgia to conduct a "thorough and transparent" investigation and to bring those responsible to justice.

Here's a video about it,


Great Post... I hope many will take this Reality, Seriously...Thanks For Sharing!