Yikes. That's about all I can say, except to ask for comments and concerns.

posted on Sep, 29 2012 @ 10:00 AM
link
If the weather report hasnt changed, I believe its to hit as a not so 'super' storm. But dangerous considering the storm surge


Well, it will weaken over land, but it's still a concern I would imagine.

posted on Sep, 29 2012 @ 10:35 AM
link
Will we see another meltdown ?
Thats what matters, typhoon come and goes, radioactive stays


Well, I hope we won't see another meltdown. I'm just thinking of the tides and high winds whipping up and spreading whatever radioactive particles are still at the site. I mean, the site is still highly radioactive, is it not?


If you're referring to the link I posted in the OP, it works for me. I don't know what the problem might be on your end. Do you have cookies and Java enabled?

The progression to Fukishima is liner.

Everyone knows that's not the way nature works.

Once over the sea and air currents on open sea, it can go many different ways.

Best China take precautions, it's coastal regions warned, people on standby to be evacated if necessary, so too emergency and medical assistances, and its vessels in the sea move to safer shores. So too Japan. No precious human lives need be lost.
edit on 29-9-2012 by SeekerofTruth101 because: (no reason given)


Hence the question mark at the end of the title of the thread. I'm actually always saying to myself, as I watch The Weather Channel's various hurricane path projections, "It could go anywhere. All the models show spaghetti, etc. Too many variables", and so forth. So... I agree with you.


Man, I hope this doesn't mean what I think it means.


I hope so too. Perhaps it will weaken enough as it passes lengthwise over the Japanese mainland.

posted on Sep, 30 2012 @ 07:26 PM
link
Looks like I'm late to the show anyway as the eye appears to have passes out to sea East North East of the Japanese mainland. 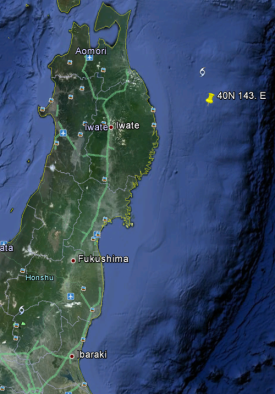 posted on Oct, 1 2012 @ 11:31 AM
link
Condolences to the family of one japanese who died from the storm on Sunday, and to the other in Okinawa, as well as those hurt.

Saw the accelerated satellite feed of the path of Jelawat.

It strucked Japan Honshu but fortunately was downgraded to a tropical storm instead of super typhoon, with wind speeds dropping from 125mph to 65mph upon reaching Honshu, zig zagged north west wards towards the western seaboard, missing Fukishima altogether before heading back to the eastern sea ( Pacific Ocean)

Thanks to all concerned who prayed.