posted on Aug, 17 2012 @ 12:21 AM
link
Ben Swann again cracks open a topic that is being avoided heavily by all MSM sources in this Reality Check.

We all know that the Ron Paul campaign had been using one of the best strategies for changing the face of the Republican party and also for potentially earning the nomination at the convention. However, the RNC and the party in general has been doing everything in their power to break their own rules and/or change them in the 11th hour.

I know the naysayers will be here to say give it up. I know they will say that Ron Paul never stood a chance to begin with. Why give up? If Ron Paul never stood a chance, then why is the establishment doing everything in their power to prevent this additional voice from being heard. The movement and the message is just to strong and they are afraid.

avoided heavily by all MSM sources in this Reality Check.


We've covered this, Domo. Ben Swann is not affiliated with Fox News other than the fact that this independent network is syndicated over the network.

You're entitled to the opinion that Ron Paul is not newsworthy, but I covered that in my comments above. It's not deemed newsworthy because Ron Paul threatens to tear down everything that the establishment has built. The media/news is a part of that creation, so of course there is an attempt at silencing the message.

ETA: The Ron Paul campaign IS NOT and NEVER was broke. He is a man of principle who lives by the words he speaks. His campaign operated on a zero debt platform and still has a surplus at this moment. If you followed this closely enough, you would know that the campaign felt it a waste of money to compete in the heavily corrupted beauty contests and decided that the delegate strategy was the way to go.

They were right and now look at what the establishment is doing to prevent the delegations from reaching Tampa. It's sickening.
edit on 8/17/2012 by freakjive because: (no reason given)


You have pointed to some rather unfortunate shenanigans. I agree that rules should be followed. Let me rephrase what I was saying, I think the reason no one is covering this is more to do with it not being very interesting to the average person. I don't think more than perhaps 30% of Americans could listen to that report and understand what was being said. I think even fewer would care since they have already written off Ron Paul.

It's still broke for a political campaign, which to me indicates just how unpopular he is. Which is why I don't think the news is covering anything related to him, not because anyone is ''afraid' of him. Shoot Obama can raise $200k with 4 dinner guests.
edit on 17-8-2012 by Domo1 because: (no reason given)

Among those who WOULD even show up to a Rally, let alone volunteer...How many showed up at the Caucus where any of it actually mattered one bit? 1,000 rallies with 10 million people doesn't mean a single thing......if the people don't show up at Caucus.

We had 1,500 people..roughly...at Dr. Paul's rally and I'd guess a couple hundred at the pre-caucus training session I attended for how to participate in the caucus itself. Those numbers would have been sufficient to outright own the Caucus here under it's own rules and beyond any fight by numbers alone. Instead?

Dr. Paul only placed for mention in 1 district in the state after the caucus and got a whopping 30,000 or so votes in a state where his values pretty well match. If only the numbers in the public rallys showed up for the working end of making it happn.

Lets see in 2016! (after everyone settles on who, of course)

It's still broke for a political campaign, which to me indicates just how unpopular he is. Which is why I don't think the news is covering anything related to him, not because anyone is ''afraid' of him.

Gee, I wonder why, when we are talking money, Romney seems to be the popular one even though he has to buy twitter followers and he's lucky to have a few hundred at his rally's as opposed to a few thousands at Ron Paul's. 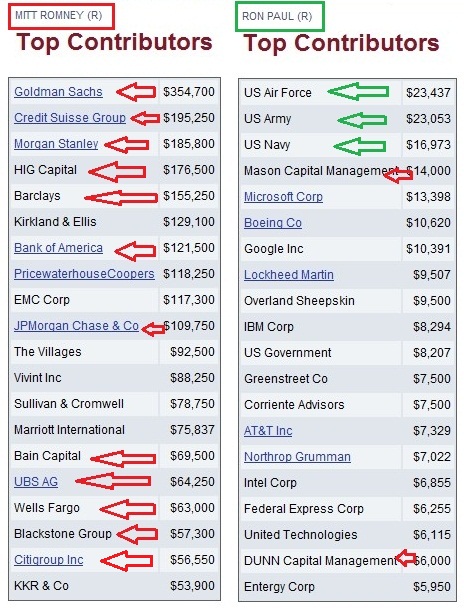 JPMorgan Chase, Citigroup, UBS, Deutsche Bank, Royal Bank of Scotland, Barclays and HSBC have been subpoenaed by New YorkAttorney General Eric Schneiderman’s office for their roles in the rate-rigging.

Hmm..those names look really familiar...where have I seen them before? Oh yeah, in the pic above. Corrupt in one way, corrupt in many ways.


Thanks for covering that, Coyote. The ones that do not want to see the corruption are just not willing to 'follow the money'. It's easier to dismiss the movement as unpopular.


I do think there is corruption. I also think Paul seems more popular online and among Paul supporters than he actually is. A lot of really devoted folks out there havedone a great job. Ive been off topic, it was rude of me.

Since the issue has already been looked in to, what is the next step?

posted on Aug, 17 2012 @ 01:32 AM
link
Don't forget, the establishment had to resort to cheating and the media to manipulation to knock Ron Paul off of 1st place in Iowa. He was leading in the polls the 1-2 weeks before the Iowa caucuses.

But aside from that, the RNC and GOP establishment playing their same old games, can't have Ron Paul and his crazy fringe supporters ruining Romney's party now, can they? After all, they're so fringe and crazy that they might actually get the people's attention with their logical message.

-Never mind that Ron Paul could still be nominated at the RNC because he and his supporters fought tirelessly to win those delegates fair and square. And despite all of the FAIR VICTORIES, the RNC is still, to this day, breaking their own rules and making new rules to adapt to keeping Ron Paul and his supporters from getting the nomination that they earned.

-Never mind an AZ delegate leader contacted the FBI and that person was threatened along with their children for attempting to expose the fraud but continued with the election fraud investigation regardless.

Yea, we MUST get rid of these crazy fringe Paul supporters before they influence some sense into the GOP. No we wouldn't want that because the people didn't vote for him, instead they voted for Obama-lite because they more or less didn't have a choice, said the mainstream media.

Originally posted by Domo1
reply to post by freakjive


You have pointed to some rather unfortunate shenanigans. I agree that rules should be followed. Let me rephrase what I was saying, I think the reason no one is covering this is more to do with it not being very interesting to the average person.
edit on 17-8-2012 by Domo1 because: (no reason given)

I find it pretty interesting because the irony of this is the party pushing the voter ID agenda on the grounds of voter fraud. When it is clear that is more about suppressing the turnout to get a favorable result for them. The same reason they won't follow their own rules when by their own admission the rules were broken.

posted on Aug, 17 2012 @ 08:22 AM
link
I've been hanging on to the possibility of a Ron Paul spoiler for months. Partly for the event itself but also for the wake up slap it would be to some people...."What do you mean Ron Paul? The media has been telling me Romney was going to be the winner since the beginning, why would they do that if it wasn't true?" and bam, welcome to the real "democracy" we live in. Still, I know that the RNC is going to try everything they can to keep that from happening. It really would be life changing though...