Federal customs officials have stopped more than 20,000 pairs of counterfeit luxury shoes from tip-toeing into the U.S. from China.

U.S. Customs and Border Protection says four shipments of fake Christian Louboutin shoes were seized on Tuesday at the Los Angeles-Long Beach seaport complex, and another shipment was seized July 27.

Spokesman Jaime Ruiz says the shoes have a value of $57,490, but could have sold on the U.S. market for $18million. 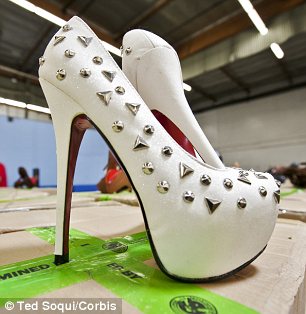 Faking it: The shoes seized came in an array of styles and colorways, and were likely destined for sale though counterfeit websites


Christian Louboutin has been fiercely defending his right to be the sole label with red soles over the past year.

The designer has faced two unsuccessful court battles with Yves Saint Laurent and Zara, both of which argued that they too have the right to sell shoes with red soles.

Can you spot a fake? The authentic red soles have a bright red color with a nice high gloss finish,' she explained. 'The fakes will have more of a dark deeper red color with more of a low gloss matte looking finish.

I don't know but should you be able to corner the market on red soles?
edit on 053131p://bThursday2012 by Stormdancer777 because: (no reason given)


The saddest part of this story is that the shoes probably would have fetched around $18 million, and yet they look like a tool of torture...


How the hell do you ladies, and a few lost gents, find these appealing..?


The High Heel is a cursed thing...


I feel sooooooo much safer knowing that our custom officials are spending so much time and money to rescue us from shoes and chocolate easter eggs from coming into our country!!!!

*There's more than one thing wrong in that sentence, believe me, I know*

The High Heel is a cursed thing...

Heel (shoe)
en.wikipedia.org...
depicted in ancient Egyptian murals on tombs and temples, who would have thought

Originally posted by seeker1963
reply to post by Stormdancer777


I feel sooooooo much safer knowing that our custom officials are spending so much time and money to rescue us from shoes and chocolate easter eggs from coming into our country!!!!


I knew you would, I was pretty sure you would appreciate the fact,

Originally posted by LadySkadi
reply to post by Stormdancer777

*There's more than one thing wrong in that sentence, believe me, I know*