Up ahead is the factory; supplying power for the goddess

Yes, a goddess I said; she runs a realm or two

Sadly however; I can not speak their names to you

Knowledge is a debt; one you cannot repay

What will it take to stop the descent of our world in to bondage?

Over the years people have begun to awaken to the fact that the ones who run our planet, from elected servant to vicious tyrant, have been leading us further along the path to total servitude. Whether they know it or not, whether you know it or not, we are all being played. Pieces in a game to gain total control of our planet.

Many call the players of this game, the hand that moves the pieces, the NWO. No matter what name you give them/it, increasingly we see that someone behind the scenes dictates flow. The heads of state are shown time and again to be but another tool of this group. The ones who decide to resist, whether because of loyalty to their people or their own disdain at being controlled, are removed forcefully.

So what is the answer? How do we take our world back? Do we rise up and attempt to take it by force? Do we wait for a Saviour to come, in the form of a god or alien species? Do we just sit and wait, knowing that all things balance out in time?

“Disobedience is the true foundation of liberty. The obedient must be slaves.” ― Henry David Thoreau

“Is life so dear, or peace so sweet, as to be purchased at the price of chains and slavery? Forbid it, Almighty God! I know not what course others may take; but as for me, give me liberty or give me death!” ― Patrick Henry


I don't actually think our world is headed into bondage. I think it is headed the other way.


Well, I have been working on a philosophy for a while that I think could spread like a mind virus, inhabiting and awakening people. I get a lot of it from analyzing the new youth culture, actually -

I think the internet did something to them, it seems to have rid their minds of cultural delusions and replaced that with an attitude of being able to understand other people's perspectives, use evidence-based thinking, and be spatial thinkers instead of temporal thinkers.

What that, in turn, means is that they have become more feminine.

This is not a bad thing, nor does it imply weakness. In fact, feminine characteristics can become very strong, yet not impede on others at the same time. It means being aware of the moment, to organize in the moment, to gather information through evidence instead of opinion.

It is the opposite of masculine, which is to be aware of the future, organize temporally, to create. This timeline manipulation is, in fact, useful however...... different factions pushing for different timelines can end up at war and it can necessitate controlling the masses in order to achieve one person's vision.

This truly is the answer you seek.


A major catastrophic event would put everyone and everything in prospective.Maybe a new dark ages would pertain either from natural consequences or just plain ignorance.A pandemic of retards have already started,so we go from there .


I dont actually know to what you refer. If I used the word incorrectly pls quote it so I can amend.

And no this is the correct forum


I appreciate optimism a star for you.


I have heard of the feminine masculine theory posed some where else, that we fluctuate through different cultural awareness, leading us to enter a more feminine or masculine dynamic in every day live. I will have to remember where I heard that.


If the world were cast back into darkness I fear that we, as a whole, would more readily accept servitude. In a futile attempt to regain our once oblivious lives.

Ahhh; but you fail to name the real hand behind the curtain. LOL. Nothing in this world is hidden from all.


Why delete your original answer? I think it added to the conversation.

Education is a key factor. Else we repeat the past, again.


If I fail in anything it is in hiding my failings.

Please enlighten us to the real name?

Originally posted by coven83
What will it take to stop the descent of our world in to bondage?

So what is the answer? How do we take our world back? Do we rise up and attempt to take it by force? Do we wait for a Saviour to come, in the form of a god or alien species? Do we just sit and wait, knowing that all things balance out in time?

In my opinion, taking away Commercial Advertising could be an option, solely based on your statement (which by the way I deem as 100% true):

Over the years people have begun to awaken to the fact that the ones who run our planet, from elected servant to vicious tyrant, have been leading us further along the path to total servitude. Whether they know it or not, whether you know it or not, we are all being played. Pieces in a game to gain total control of our planet.

Seems that ever since the advent of advertisements in written, radio and TV ads we have been "coerced" into what to do, say, how to think, what to wear, what to eat etc...the list goes on and on. The advertisement industry has several billions of dollars put into it every year...for example:

In 2010, Internet advertising alone was over $26 billion (that is $ 26,000,000,000).1 The same year, television advertising was over $ 50 billion (Ad Age). These figures do not include magazines, newspapers, billboards, product placement, pre-movie commercials, and branding & marketing expenses.

How much money does the advertising industry spend each year?

Take away the ads, and you take away to ability to compel the peoples into doing what you want...

Is this a viable answer? Not at all! Take away the "player's" hands, he will have nothing to move his pieces with. The advertisement industry is, and always has been/will be the thumbs and pinky fingers of those hands...(TPTB). Take them away suddenly and without warning, you can still learn to move your pieces, but perhaps not with as much accuracy and//or speed at first.

TPTB would never even think of allowing this to happen! Even if the world was struck by the biggest X-Flare/Niburu/flood ever, eventually advertising would come back, in full force!

To many questions and not enough alcohol in the world to quell the rage I feel at having my children's future dictated by a group I have no support for or by. So ATS what think you?

Originally posted by coven83
reply to post by AQuestion


If I fail in anything it is in hiding my failings.

Please enlighten us to the real name?

Names are meaningless, intent is everything. Explain your intent to them, explain what you are attempting to prove. Be open, transparent and truthful, never deceitful. I shall make it easy, do you love or hate mankind? Are we the best that has existed, the worst or the best of what is possible? Have fun.


That is an answer I wouldn't have expected, and one of the best I could ahve hoped for.

In damn near ALL futuristic Sci-Fi movies and books advertising is an intrinsic part of the daily mind control. Keeping the sheep in line, the ostrich's head in the sand. Good point.


Posing riddles you yourself could never answer is not a very good way to add to the conversation, but I'll byte.

Hate or Love mankind? Both; as I both love and hate myself.

The best or worst of what is possible? Both; we are made from everything, a part of everything.

But assuming that separateness does even exist… we are so interconnected, so able to freely share ideas and do so in ways our ancestors would never have even dreamed that I cannot see how at least on a mental level we are descending further into bondage.

TPTB may well control things at a superficial level on a scale never before seen but where man’s mind first travels the world will surely follow. No one can contain 7 billion people indefinitely. Assuming some mass catastrophe no one could even contain a few million indefinitely. We all just have to wake up a little more; and TPTB’s last desperate attempts to contain us will probably be just the catalyst that is needed… 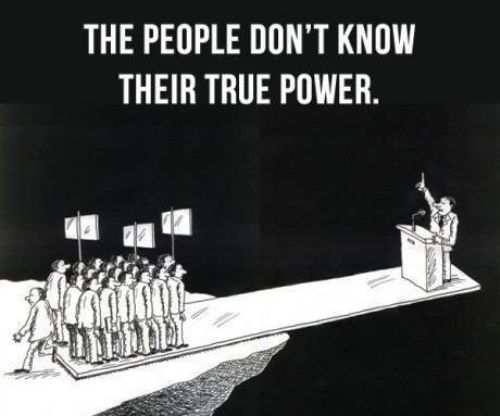