posted on Aug, 15 2012 @ 01:56 PM
link
Astronomers believe that the massive Phoenix Galaxy Cluster produces as many as 740 new stars per year and confirms a theory that clusters go through a cooling phase resulting in blue light as they cool down enough to draw together and start the process of star formation .
The cluster has a mass equivalent to more than a million billion Suns (Wow) and is about seven billion light-years away . 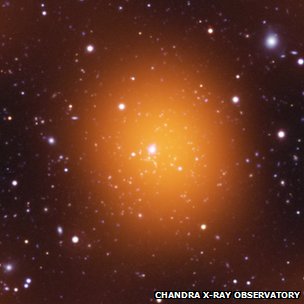 Microwave, visible and ultraviolet studies sum to show a bright core of the cluster.

Most galaxy clusters - the largest structures in the Universe - are "red and dead", having long since produced all the stars they can make.
But cluster formation should, according to theory, include a cooling phase, resulting in blue light from new stars. Writing in Nature, researchers say they have seen evidence that the enormous Phoenix cluster makes 740 stars a year.


"It is indeed reassuring to see this process in action," he said. "Further study of this system may shed some light on why other clusters aren't forming stars at these high rates, as they should be." The team is hoping to get time on the Hubble Space Telescope, which should provide spectacular images of the central blue star-forming region.
www.bbc.co.uk... 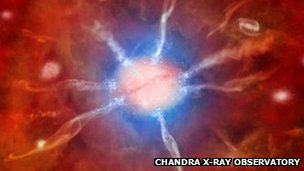 An artist's impression of the cluster's core shows what eventual Hubble telescope studies expect to see.

The Universe never ceases to amaze me , it is just mind boggling

posted on Aug, 15 2012 @ 02:06 PM
link
It's literally incomprehensible to think how big everything is (to me anyway). I try to think about it, but it's beyond my scope to form a really definitive clear idea about it.


The artist impression of the core really reminds me of a neuron. It is amazing how the universe repeats itself in design from the smallest cell to the biggest star makers. Crazy!

Originally posted by gortex
...[The cluster] is about seven billion light-years away ...


This cluster was producing 740 stars per year when the Universe was about half as old as it is now. I wonder if there are still similar clusters today producing that many stars, or if star-factory clusters such as this were just a characteristic of a "younger" universe?


That's a good question and may well be answered in the hopefully not to distant future as I'm sure that question is in their minds too
Given the distance and the rarity of the discovery that may well be the case , although I wouldn't put money on it as I would imagine such Galactic mergers must still have happened later in the Universes history that form these massive clusters .


That is exactly what bends my mind. The enormous delta between what happened and how long it takes us to see it.

I suspect there is some intelligent life out there that laughs at us for viewing repeats instead of the live show.
edit on 15-8-2012 by Zarniwoop because: spelling