U.S. Women and the Princess syndrome

posted on Aug, 14 2012 @ 01:43 PM
link
I just wanted to bring to attention that I have been noticing an increase of the egotistical "Princess Syndrome" in American Women.

The Princess syndrome is this whole persona that many women take on where they feel they should be treated like royalty, that they are in some kind of reality TV show, that they deserve the utmost attention, an entire paycheck spent on them, and only date the proverbial steroid jacked shallow douche-bags that we see on shows like Jersey shore.

I think it's a combo of the "American Dream" being instilled in them since birth coupled with all of these realty tv shows where the most abrasive and egotistical girl, becomes the most famous and most popular. It's literally polluted women's characters.

My own sister suffers from this syndrome and I tell her BF I feel sorry for him all the time. All my friends and co-workers I talk to all say the same thing, that we are literally drowning in an over abundance of women suffering from this syndrome.

I've actually considered a mail order bride from a country where they come from nothing, which means there is still a possibility they may appreciate what they have here and stay humble. Even that though, can end up with the girl becoming completely polluted by our Princess culture.

I think our society in general is becoming more "entitled." Princes and Princesses alike.

I think its a maturity thing....try dating older ladies (even a year or two will make a huge difference). Or look in different places....we aren't all acting like entitled snots!


Heck, I grew up with five olders sisters and have experianced this all my life.

Can't say I am miserable though as I love my sisters.

Usually, they grow out of it.

And they say men are immature.

Women CAN be princesses. They have to earn it though. Real "princesses" dont require their boyfriends or mates to sacrifice themselves to them though! Those kind of women and girls youre speaking of never really get anywhere, and they arent as plentiful as you think and appearances may be deceiving. Theyre just the loudest and get the most noticed. Hollywood plays on the simple minds of some women.. but not the majority. IMO of course.

My dad wouldnt let me read romance novels, some movies, or things of that nature when I was young. Said it was junk and would fill my head with impossible expectations concerning myself, love, men, life, and relationships.

posted on Aug, 14 2012 @ 01:57 PM
link
People never want whats "good" for them, and most men and women need to look for people that treat them right, not some ideal sold to them by the TV.


I'm thinking you must from be a city type enviroment.

Try moving to the country. You'll find more "Down to earth" girls there. But don't think they're country bumpkins, as they'll hand you your @$$ when you screw up.
edit on 14-8-2012 by TDawgRex because: ah crap!


The best way to deal with these types is to ignore them.

Drives them crazy when you are not feeding them attention!

Doesn't really bother me though.

Most will grow out of it.

Originally posted by TDawgRex
reply to post by dominicus


I'm thinking you must from be a city type enviroment.

Try moving to the country. You'll find more "Down to earth" girls there. But don't think they're country bumpkins, as they'll hand you your @$$ when you screw up.
edit on 14-8-2012 by TDawgRex because: ah crap!

Not necessarily. There are many many many country princesses who think their big hair and poo dont stink. Ever been in a county beauty contest?? I imagine not, youre a guy.. but lemme tell you, country women are infected as well. I blame satellite TV.

posted on Aug, 14 2012 @ 02:04 PM
link
My personal opinion- a sense of entitlement also seems to come from the overkill of Barbies and Disney princesses that girls are exposed to at a young age until they are teens. Messages of fairytales and living the charmed life are not realistic, but it's what young children are "force fed" through TV and media. I was always a tomboy and never into that stuff and I definitely never had, and do not currently have, the princess syndrome going on. My sister, on the other hand, was into that stuff and to this day has major princess syndrome going on.

posted on Aug, 14 2012 @ 02:04 PM
link
Just so you know, we are not all like this. There are still normal, grounded, down-to-earth women out there, too. Maybe we normal women just get drowned out and overshadowed by the princess types? I don't know how old you are, but perhaps this is more common among the younger bunch of gals? Or maybe it has to do with upbringing?

I'm 34 and came from very humble beginnings (here in the US). I worked hard to go to college and I still work hard at my job now (and 2 part-time jobs on the side), along with raising my son alone. I consider myself very low-maintenance and I take a great deal of pride in that. I cut my own hair, cook my own food and clean my own house. I expect nothing from no one. But this is how I was raised.

Maybe instead of ordering a bride, you should try looking harder or looking in different places for a woman. I mean, would you really want to be married to someone knowing that the reason they are married to you is simply because you shelled out the right amount of money? Wouldn't you rather have someone who is with you because they love you?

Not trying to be mean or rude, just saying... I see these princess types around, too. They always amuse me with their lack of practicality.


Please don't make it a girl-thing, it's morons with morons. I am a female, and I've known many girls, and that behaviour is a lot of times very much overstated, and looks just as odd and TV-like to us, as it does to you.


I agree with this. I once tried to date this girl who had just started college and she was the most fickle unreliable person I had ever met. I was disgusted by her immaturity. Then I talk to girls who are on the verge of graduating or have already graduated and its like a totally different experience.


I have no idea what you're talking about I've never been given anything. I've worked for everything I've ever gotten and so has my daughter. Obviously you've been around the wrong people. Perhaps you should refrain from judging an entire group based on a small percentage.

Originally posted by sixswornsermon
reply to post by dominicus


The best way to deal with these types is to ignore them.

Drives them crazy when you are not feeding them attention!

Doesn't really bother me though.

Most will grow out of it.


Agree with this!
Just ignore them and never buy into their conversations where they try to get you to compliment them.
I used to work with an attention seeker. I used call her princess all the time.
Aside from getting laid, I cannot fathom why people would validate this behavior.

I don't see enough of this behavior to say it's an American epidemic, but there are many on tv who act this way (although I think it's all faked on tv).

At the moment i'm having problems with my teeth, and i tend to suck on them with my tounge to keep in check on the pockets begining to form, so i decided to do a quick check to see if this causes more damage than good.

Looking on some health forums and what not, and to my amazement, it was filled with loads of replies of people demanding a cure to their "teeth sucking", like it was an illness of some sorts, its simple, STOP DOING IT! It's lik kids demanding a cure for them so they can stop picking their noses.

People believe that they deserve everything/anything with minimal effort, used to not having to do anything for themselves, and become outraged when something they demand isn't done. They don't have much money? It's somebody elses fault, even though it could be because they don't want to work, but that isn't the problem, its because someone is not giving them money, and then they look down on the poor, the people who work all hours of the day to keep what little they have. It disgusts me.


LOL well first I would have to care before I could be scorned; just get tired of generalizations of a large segment of population based on a small percentage; goes against the entire deny ignorance. FYI it could be any large segment of population being judged and I'd still be annoyed. Painting with a wide brush and all that is hardly the way to deny ignorance or improve anything.

We're #ed, to put it lightly. And the self concise/obsessed me me me attitude is infecting the male youth, too. 'Trends' spread further and faster via social networking and the pressure to be popular makes these brainless people sink into this behavior. Baaaa, YOLO. If YOLO, then why live as a sheep?

Originally posted by dominicus
I've actually considered a mail order bride from a country where they come from nothing, which means there is still a possibility they may appreciate what they have here and stay humble.

Careful with that mail order bride, Dominicus. You never know what you'll get. 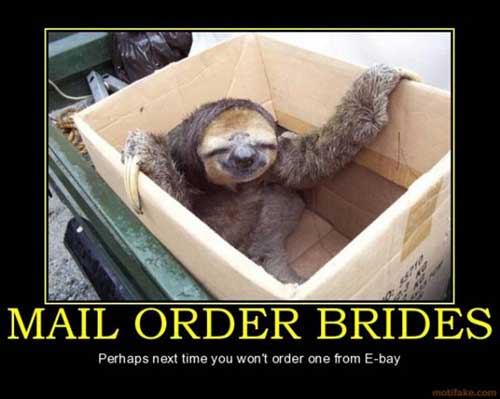 I have a sister-in-law who's a princess. She can't do a single thing for herself. I don't understand how people can choose to go through life that way. It's so limiting.