George R.R. Martin, author of "A Game of Thrones", has slammed "Republicans and their Teabagger allies" in so-called swing states for what he calls "voter suppression."

In a recent blogpost on Martin's website, he refers to recent voter purges in Ohio, Pennsylvania, Florida, Iowa, saying that "The people behind these efforts at disenfranchising large groups of voters (the young, the old, the black, the brown) are not Republicans, since clearly they have scant regard for our republic or its values. They are oligarchs and racists clad in the skins of dead elephants."

That is an epic quote, worth repeating:

"The people behind these efforts at disenfranchising large groups of voters (the young, the old, the black, the brown) are not Republicans, since clearly they have scant regard for our republic or its values. They are oligarchs and racists clad in the skins of dead elephants."

America should be setting the example in how to hold a fair democratic election. Instead, it should hang it's head in shame while the .01% rob the country of it's democratic heritage.

GOP voter suppression has become blatant. Mr. Martin has nailed it exactly, "They are oligarchs and racists clad in the skins of dead elephants."
edit on 14-8-2012 by Blackmarketeer because: (no reason given)


I read that quote in Tyrion Lannister's voice. Couldn't help it

posted on Aug, 14 2012 @ 06:16 AM
link
While his concern is appreciated, his input is not required. It's good he is pointing out what he perceives as an injustice. But his language shows he is just a cool-aid drinking democrat which makes him no better than a cool-aid drinking republican. So he should get off his soapbox and do what he gets paid to do.

What he needs to be doing is writing the next damned book.

Take the approach the Author endorses. 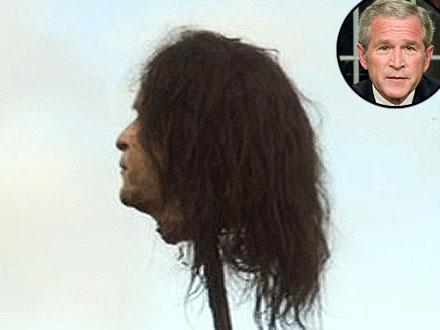 Who are the haters again?


Apparently not. When it takes him 5 - 6 years to write one.

He needs to hurry up before our Reptilian overlords come to enslave us.


I thought Bush's decapitated head in GoT was awesome

Maybe he'll actually get around to books 6 and 7 one of these years...

Originally posted by beezzer
We can either take a reasonable approach

Take the approach the Author endorses.

Who are the haters again?

Does the book say that it's Bush's head?

Or was it someone in the production crew having a laugh?

posted on Aug, 14 2012 @ 07:38 AM
link
And once again why should I care what this guy's opinion is? If the law has been broken arrest people or fire up the law suits or whatever it takes to fix it. Sitting around writing blog pieces on the Internet is pointless.

Let's get something straight. Your statement is misleading and omits the actual LAW.

True, the hours vary but those hours have been determined by the county boards of election. It's complicated, I'll give you that and suggests that the SOS position should possibly be a neutral non affiliated position.


While the law allows the four-member county boards of election -- two Democrats and two Republicans -- to set their own hours for in-person early voting, when there is a tie, the secretary casts the deciding vote. Husted said that if called upon to break a tie, he will side with limiting voting to weekday business hours -- 8 a.m. to 5 p.m.

He's done that already in a handful of counties, including Cuyahoga, Summit, Franklin and Lucas -- Democrat-heavy areas with major Ohio cities, respectively, Cleveland, Akron, Columbus and Toledo at their core.

Meanwhile, a few Republican-dominated areas -- Warren and Butler counties in Southwest Ohio -- have voted to extend their voting hours into evenings and Saturdays.

In those counties, Republicans voted with Democrats to extend the hours, whereas Republicans in counties where Husted has broken a tie had voted against extending hours.


Ohio Secretary of State Jon Husted said he is considering requiring the same set of early voting hours across the state in the run-up to the November election.

"There's nothing forthcoming and nothing in the near term as far as a directive on this matter," Husted said in an interview, "but I will be listening to local boards of elections' concerns on this issue."

Later, Husted's spokesman Matt McClellan said, "Secretary Husted will not respond to political hysteria, rather he will work with local elections officials to find a thoughtful solution."

Husted did not outline which county boards of election he would be talking to or say when he might make a decision on whether to issue a directive, other than saying he did not expect to make a decision this week.

Meanwhile, Cuyahoga County Executive Ed FitzGerald plans to hold a news conference Tuesday to ask the county board of elections to reconsider its ban on weekend early voting, now that other counties have voted to allow it. FitzGerald, a Democrat, said the county has the money in its budget to cover the extra staff.

With this being a presidential election year and Ohio again a swing state, the stakes are high and an enormous amount of attention is being focused on access to voting.

Sounds like a work in progress. Meanwhile Husted is trying to make voting as easy and less complicated as possible. This is good. They will automatically mail absentee ballots to all registered voters in the state

Husted last week announced that his office was now offering registered voters the option of updating their home addresses online. The measure is intended to cut down on the use of provisional ballots, which are more highly scrutinized, confusing and sometimes not counted at all.

And the secretary reiterated last week that for the first time in a major general election, Ohio would be mailing absentee ballot applications to all 7 million registered voters to give more opportunities to cast a ballot.

As far as the other accusations of "voter suppression" God forbid we actually ask anyone for ID to prove that they are who they claim to be.


In the '08 campaign, Republican Sen. Norm Coleman was running for re-election against Democrat Al Franken. It was impossibly close; on the morning after the election, after 2.9 million people had voted, Coleman led Franken by 725 votes.

Franken and his Democratic allies dispatched an army of lawyers to challenge the results. After the first canvass, Coleman's lead was down to 206 votes. That was followed by months of wrangling and litigation. In the end, Franken was declared the winner by 312 votes. He was sworn into office in July 2009, eight months after the election.

Since then. 177 of those Felons have been CONVICTED of voter Fraud in Minnesota. 66 are awaiting trial.
washingtonexaminer.com...

posted on Aug, 14 2012 @ 08:20 AM
link
Maybe its time Russia or China stepped in to liberate the American people from their corrupt, terrorist government.

If this were put into place, and made manditory by the government, it would necessarily be distributed free. Otherwise it could be unconstitutional as a poll tax.

What would be the cost of all these photo IDs. Well, that would not matter as long as no one was able to commit voter fraud any more.

One other good thing could come of such a "card" to be carried at all times.

Those without one could not buy or sell or do any commerce. Could travel or rent housing....


When Ohioans went to vote in the 2008 presidential election, they could cast ballots in person the weekend before Election Day. Lynne Edward Kincaid, the director of the Butler County Board of Elections, remembers that Saturday and Sunday in 2008.

“You would not believe the crowds that we had,” Kincaid says. “And the line was 2 1/2 to four blocks long.”

But he won't at this point be offering extra hours on Saturdays in October and later hours on some business days during the week.

Butler is a Republican area. But Jerid Kurtz, a spokesman for the Ohio Democratic Party, notes that similar attempts says to extend voting hours in Democratic areas have run into a roadblock.

In some big city counties including Cuyahoga, Franklin, Lucas and Summit, “they are choosing not to give access,” Kurtz says. “And Republicans are using every tool at their disposal to limit access and it’s very disturbing.”

Ohio sets up one early-voting system for Republican counties, another for Democratic counties
(dailykos.com)

In Ohio, Republican-approved cutbacks in early voting will disproportionately disfranchise African American voters who live in the state's most heavily populated counties. Ari Berman at The Nation gives us the skinny. 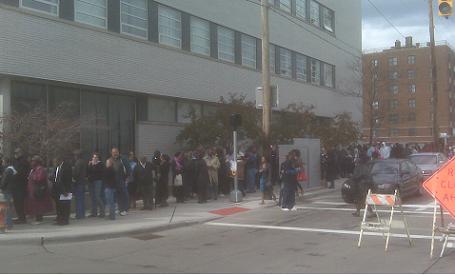 
Why then is your input more valuable than that of an intelligent writer whose list of credentials I am certain is more impressive than yours?

Originally posted by jjkenobi
And once again why should I care what this guy's opinion is? If the law has been broken arrest people or fire up the law suits or whatever it takes to fix it. Sitting around writing blog pieces on the Internet is pointless.


Can you tell me how a blog is so radically different from what you've just done? Who cares what your opinion is?


Of course it is. That is because jibeho like every other Ohioan knows that the urban centers in Ohio tend to vote Democrat. Usually this is enough to swing the state. If you are a Republican then you have a vested interest in ensuring that those lines in Democratic leaning districts are nice and long. The really funny part is he whines and cries about felons voting yet in Ohio it is perfectly legal for them to do so. The even funnier part is that he justifies this as being up to the county board of elections, and it is. But since the board is split evenly it takes a tie breaker vote from the secretary of state who happens to be a Republican. So explain to me why the Republican party runs around saying they are the freedom loving party when they systematically have chosen for less freedom for those that are likely to disagree with them?


The general population in OHIO still has 35 days to cast an early in person Vote!!!! Plus, the option to submit an absentee ballot via mail which the SOS is now going to send to all 7 million registered voters in the state. 35 Days and a mail in option. You don't even have to leave your home to vote with a No EXcuse Absentee Ballot!!!!

Voting hours are still the same for EVERYONE on Election Day. This whole debate is about early voting and the hours in which people can cast that early vote within the 35 day time frame. In Ohio, workers can take time off to vote on Election if they are unable to vote any other way or if their work schedule prevents them from voting during the 12 hour election day. So 35 days, mail in absentee ballot, plus election day allowances.... What more can be done.

I am all for making the hours for early voting the same for ALL counties. I can't argue with that. But that's how the process works when there is a tie between the 2 dems and 2 reps. who vote. If it was a Dem. SOS the outcome would certainly be the opposite. So, take the BS out of the equation. I'll support you on that.
edit on 14-8-2012 by jibeho because: (no reason given)


Are you telling me your opposed to Bush and Chaney's head on a stick?

Cause frankly any prez that violates the constitution should face treason charges, ANY pres.


Anyway that was covered in several reports, according to them it was simply a head they had on hand, and instead of casting several new heads they grabbed what was available.