The blaze at a recycling centre in Dagenham began at 1.15pm on Sunday afternoon and at its height sent up a plume of smoke so large it was visible across the capital.

Fire chiefs said the entire building, a single-storey facility on Chequers Lane measuring 50 metres by 100 metres or about the size of a football pitch, was alight.

A spokesman said the cause of the fire had not been established yet but emphasised that it had not affected fire cover at Olympic venues.

Ron Dobson, London Fire Commissioner, said: "We've not seen a fire of this size in London for several years.

""It's certainly a dramatic end to the Olympics for the London Fire Brigade. That said though, we are still able to attend incidents across the capital and the fire cover we're providing at the Olympic venues has not been affected. 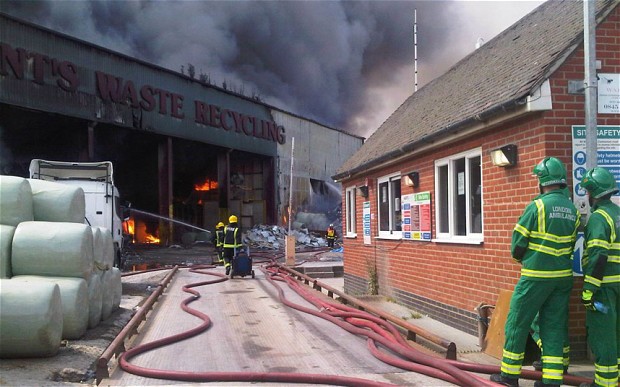 Apparently 200 firefighters and over 40 fire trucks are on the scene dealing with the fire, so it's a big one. Some say that the warehouse is near the stadium.

Strange that there isnt that much coverage on the msm, just read it on he ticker. Either they are not trying to steal any light from the games or...


More information once it becomes available.

Now eagerly waiting for someone blames it on Iranian or Hezbollah. (Israelis gave few minutes to blame Iran and Hezbollah for Bulgarian tourist buss explosions.)

Apparently the aliens are rumoured to be doing a fly-over tonight at the Olympic Stadium during the closing moments.

Now with the illuminati making this fire the U.F.O's will get all dirty covered in hazardous plastic fragments.

Could be some political statement by any number of groups.

The smoke from any structure fire is toxic.

For all we know they were recycling paper, but anytime a building burns it releases all kinds of nasty junk in the smoke.

Originally posted by poet1b
It certainly is strange timing. Might be just a coincidence, but makes one wonder.

Could be some political statement by any number of groups.

Or a diversion to keep resources busy.

Watch my left hand while my right steals your wallet kind of thing.
edit on 12-8-2012 by AGWskeptic because: (no reason given)

posted on Aug, 12 2012 @ 01:31 PM
link
If nothing happens at the ceremony tonight, people will call this the crash of an ufo or something. Can't see any links with the Olympics.

posted on Aug, 12 2012 @ 01:34 PM
link
How ever this fire started, and what if anything it means is yet to be known...but what a bummer for the people of London, and a sad way to end the Olympics....hope this is the worse of it....I think many of us around the World have been holding our breath, hoping that everything would go smoothly during the Olympics, and have been happy and relieved so far it has....

If this fire was started on purpose to cover London in toxic fumes and smoke during the closing ceromoies, it doesn't get much "lower"...well...actually I guess it can get way "lower" but sending good thoughts to London from the USA.....our governments suck...but some darn wonderful people in this world, and enjoyed watching the Olympics....very fond memories of the Olympics being in LA , CA when I was kid, we went to several events, and I remember how beautiful everything was, still have a cool banner my Mom got me from the girl's volleyball games to this day....hope the people of England enjoyed hosting the Olympics reguardless of this horrible fire.....and I'm guessing it may feel like having a house guests you enjoyed, but are ready to see go home....

posted on Aug, 12 2012 @ 01:38 PM
link
It may be big, but it's not particularly dangerous, is miles from the Olympic stadium and the smoke is bowing in the opposite direction.

Still, maybe this means all the false flag alien landings protagonists were right? Perhaps an alien spaceship disguised as an aircraft about to crash into the Olympic stadium was shot down and HAARP was used to change weather patterns to divert the deadly toxic fumes from the burning cardboard boxes? B*gger. ATS thwarts them once again.

It started at 1.11 (they say 1.15, I know), is located 11 km from the Olympics Stadium and is located on Chequers Lane. The Illuminati and other occult people loves the symbolism in black and white chess boards.

DAGENHAM is The God DAGON, Father of BAAL or BAAL, LUCIFER itselF, HAM is a hebrew word "This name Ham is identical to the adjective﻿ Ham (ham) warm, HOT, from the verb hamam (hamam) meaning be HOT, WARM, INFLAME" Also go to Nimrod, "He is described as the son of Cush, grandson of HAM". 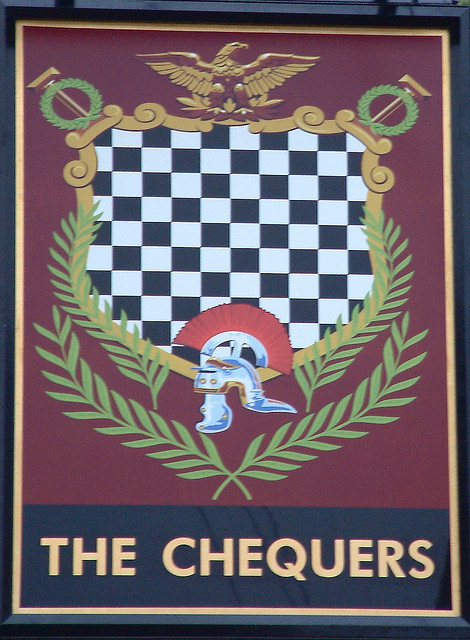 Or a diversion to keep resources busy.

That was my thought. Interesting timing.

posted on Aug, 12 2012 @ 02:02 PM
link
Biggest fire in years on the last night of the Olympics? Can't believe this is coincidence. Hope it is just down to some idiots rather than anything more sinister (like diverting resources).

How interesting - this is the site formerly owned by the same 'London Godfather' who has an ongoing libel case against The Times newspapers which is due to start shortly , and the Times announced that he was going to 'take charge of land designated for the Olympics and sell it to crime lord Terry Adams' - what a wonderful thing the Olympics are eh , Gold Medal for coincidences !!

I don't have any knowledge of what he is talking about but thought it was worth adding to thread to see if anyone else can comment or shed any more light.

Originally posted by lifttheveil
This quote from The Times comments got my attention....

How interesting - this is the site formerly owned by the same 'London Godfather' who has an ongoing libel case against The Times newspapers which is due to start shortly , and the Times announced that he was going to 'take charge of land designated for the Olympics and sell it to crime lord Terry Adams' - what a wonderful thing the Olympics are eh , Gold Medal for coincidences !!

I don't have any knowledge of what he is talking about but thought it was worth adding to thread to see if anyone else can comment or shed any more light.

Good bit of digging. Lets see how it goes. For something this big it is rather strange that so little coverage is given to the fire. Especially given it's size.

Fwiw, where I live there have been 3 fires in recycling depots in the past year. There apparently is no longer a market for their goods.

posted on Aug, 12 2012 @ 04:31 PM
link
The fire has apparently been brought under controll as tweeted by @londonfire.
Strange that it had it's own twitted feed but there you go.

Firefighters will still be on the scene throughout the night to douse the remaining flames.