In the summer of 1998, Russian scientists who were investigating an area 300 km southwest of Moscow on the remains of a meteorite, discovered a piece of rock which enclosed an iron screw. Geologists estimate that the age of the rock is 300-320 million years. 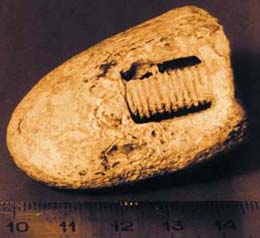 posted on Aug, 11 2012 @ 03:17 PM
link
Hey there, not sure if this has been shown before, but a screw found and estimated at 300 million years found on earth via a meteorite, hmm this obviously suggest intelligence not of this world.

I have noticed a pattern through major and non major news outlets and its seem's they are pushing the concept of alien intelligence as "fact". Myself, i am fully aware of my religious beliefs and i am also fully aware that out of the hundreds of billions of galaxies in the univers its stand to reason that there "is" another form of intelligence.

My personal view on a non terrestrial life form entering our is planet has been well posted throughout ats and it still stands. They do not come in peace, they have no concept of peace as you and i have been taught.

So far I am convinced they are the result of either

posted on Aug, 11 2012 @ 03:23 PM
link
Perhaps the screw isn't embedded in anything. The 'rock' itself could have been a man-made object that became fossilised, and the screw was part of it.
Seriously flawed dating techniques is the most likely explanation, though. How many people have ever questioned the supposed infallibility of carbon dating?
edit on 11-8-2012 by XeroOne because: (no reason given)

posted on Aug, 11 2012 @ 03:30 PM
link
I have always believed that civilization has advanced at least once but probably several times in the past, then wiped out by some cataclysmic event.
If youve ever seen the show on the History channel, Life after people, it shows what happens to the hardiest of structures, even after a few hundred years.
Steel decays, returning to the earth where it was formed. What doesnt decay gets buried beneath water, earth and or vegetation.

Why do we trust carbon dating?


Hey there, not sure if this has been shown before, but a screw found and estimated at 300 million years found on earth via a meteorite, hmm this obviously suggest intelligence not of this world.

Yep those damn iron nuts, bolts and screws off spaceships million and millions of years advance to us just seem to never stay on....

Meteorites are billions of years old...not sure how they suggest a 300 million year old one, and it looks more like light colored calcium type buildup than a rock...just saying.

It's like the 100 million year old iron hammer head found in a rock that looks exactly like an 1800 hammer head, I think if we focus on anything it is the suggested age and type of the rock it was found in. Here we have once again a simple item made up of basic materials and we want to suggest it is something it is not.

Edit to add: you all would be amazed with the archimedes screw.

It was a form a byrozoan. the crinoid is related to your modern brittle stars.

edit on 8/11/12 by Raist because: adding photo and information

You can't carbon date rock....the magic word is carbon as in the lack of....

Originally posted by Raist
That looks is a crinoid stem or it could also be a cephalopod, but my money is on crinoid.

That is a good point... is it actually a metal screw or just round ridges that are not screw like. It looks more like rings than a actual screw pattern.

posted on Aug, 11 2012 @ 03:43 PM
link
Can someone help me here, although the translation is kinda sketchy but those have knowledge on the below quote might be able to shed some light...

Case of "error" was excluded because in addition, as shown by subsequent studies, the screw is there really a huge amount of time, since the iron atoms of the screw and the atoms of silicon (from which the rock consists mainly) have spread across the two ylika (silica) .Oi X-rays revealed that exist within the rock bolts and similar .. as well as two small round balls that have square holes.

Is someone able to explain this *Note, i placed the term (silica) as i google what was written and it showed this term as the appropriate explanation.


Russian prop, for what possible reason ?


Rock x-rays are very unreliable. You need a very powerful x-ray to penetrate and then since the rock hold the same density throughout the x-rays are not accurate really. This would make a round, or star shaped hole (what the inside of a crinoid stem looks like seem square. This is also the reason they do not x-ray dinosaur eggs. They do cat scan them but with barely better results than the x-ray.


To get themselves in the news for finding something great.

Again they did this a few times this year. another story they said concreations were dinosaur eggs but the size was far to large for dinosaur eggs when the largest were no bigger than a basket ball.


I see your point, however, as person who lives within the deep web, i have read files that wont show up on any news outlet that later *months, become headlines. I am truly cautious about specific topics and how they are filtered.

Even this site has been mentioned within the deep wb, within, specific invite only groups as to how its dynamic flow and its influence amongst the general public is. All i am allowed to mention is that its neutrality has been noticed and is being watched. Would also like to make it clear that this sites abbreviation is never mentioned but a numerical and division of a specific incident (date/month/year) indicates that this site is being mentioned. ( talk about crypto )

oh..talk about me going off topic..oh well you get my point...
edit on 11-8-2012 by cerebralassassins because: (no reason given)

posted on Aug, 11 2012 @ 04:06 PM
link
Anyone who takes a serious look at this universe and comes to the conclusion that humans are the only life form with technological intelligence loses all intellectual credibility as far as I see it.

By my count, the probability of nonhuman intelligence existing on earth at some point is nearly 100%.

Science says it took humans 2 mil. years to go from monkey to modern. That's an eye blink. Even if intelligence only developed in the most recent 1% of time, that gives a head start of hundreds of millions of years on humans. If humanity is continuous for just another 10,000 years, then wow to that possibility.

The question is not whether intelligent life can develop, but whether it can survive...

All of the science really only considers water based life and that's probably a major flaw.